Gold prices went into overdrive today rekindling the dynamic rally which had been consolidating ever since reaching the yearly high at $1442, and $1440 6 trading days later. Gold which had found support just above $1388 the low achieved in trading yesterday skyrocketed well past $1400 an ounce. As of 5:48 PM EDT gold futures basis the most active August contract is currently up $19.50 (+1.39%) and fixed at $1420 per ounce. 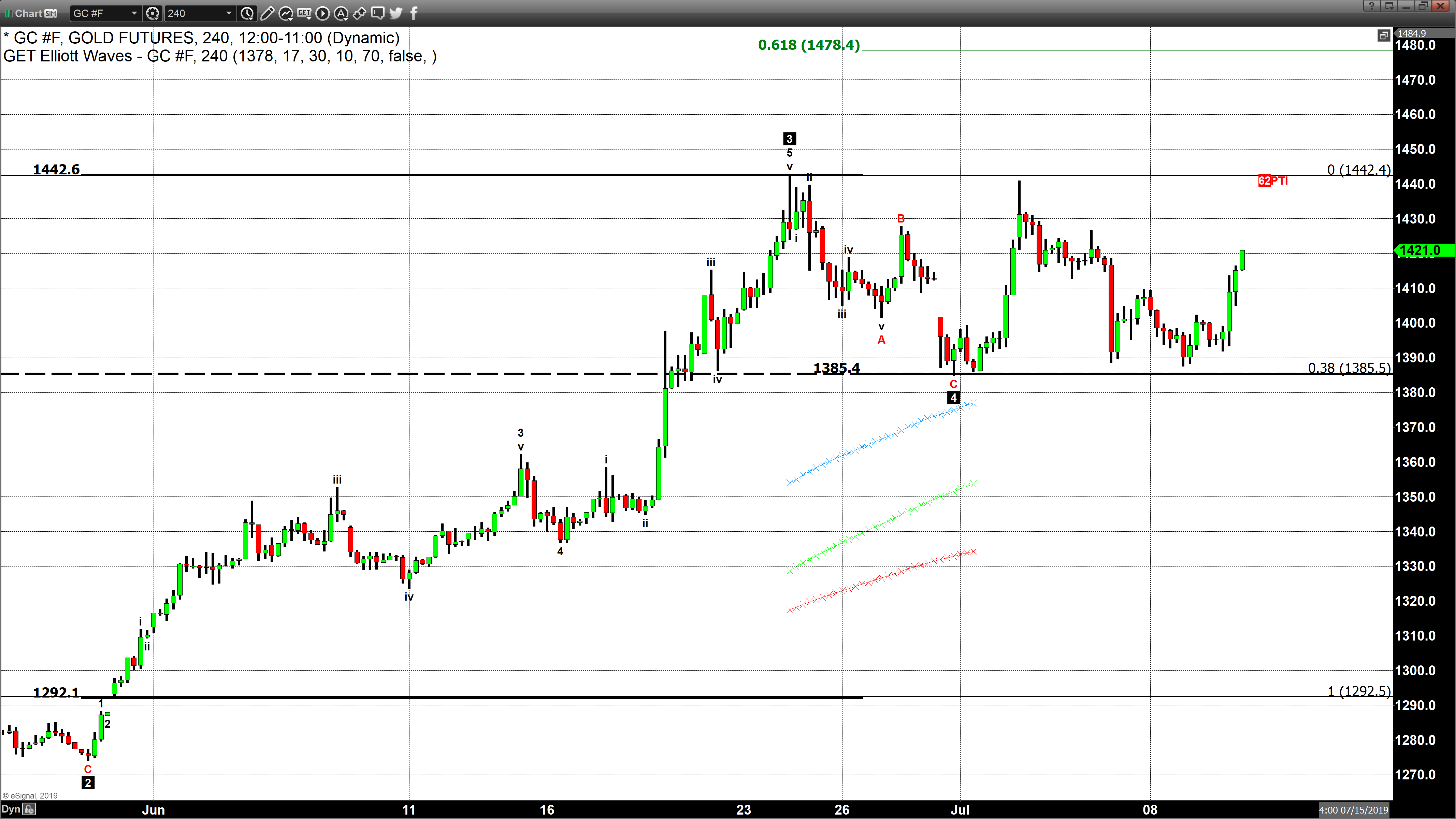 This dramatic rise is occurring in conjunction with U.S. Treasury yields which dropped sharply from their highs achieved on Wednesday, and U.S. equities which were once again in full rally mode. Underlying these dramatic price changes are recent statements and remarks by the Federal Reserve Chairman Jerome Powell.

In a testimony today before Congress Powell said that “ongoing trade fights with China and other countries have contributed to slower growth at home and abroad and pose more risk to the US economy.” He also elaborated when he said that the Fed, for its part, is prepared to “act as appropriate to sustain the expansion.”

According to analysts and economists, Powell restated the current Federal Reserve’s stance, using a phrase that economists say points strongly to a rate cut at the bank’s next meeting at the end of July.

Interestingly enough the chairman downplayed positive economic data by not focusing on a rebound in consumer spending during the spring and a surge of a hiring in June that lessened concerns immediately following a dismal employment report in May. On the contrary he emphasized trade tensions and slower growth around the world.

A statement released in relationship to the current fed monetary policy said, “At our January, March, and May meetings, we stated that we would be patient as we determined what future adjustments to the federal funds rate might be appropriate to support our goals of maximum employment and price stability.”

During the May FOMC meeting, the statement said that they were mindful of the ongoing crosscurrents from global growth and trade, but there was tentative evidence that these crosscurrents were moderating.

However, the statement went on to say, “Since our May meeting, however, these crosscurrents have reemerged, creating greater uncertainty. Apparent progress on trade turned to greater uncertainty, and our contacts in business and agriculture report heightened concerns over trade developments. Growth indicators from around the world have disappointed on net, raising concerns that weakness in the global economy will continue to affect the U.S. economy. These concerns may have contributed to the drop in business confidence in some recent surveys and may have started to show through to incoming data.”

The fact that Chairman Powell once again reiterated a strong potential for rate cuts and a more dovish monetary policy will not only have the opportunity to revitalize and re-energize our economic expansion and continued rally in U.S. equities, but more importantly be a catalyst taking gold prices substantially higher.