Per last week's missive, "Silver, Baby!" clearly has been the precious metals story since mid-month. But with the white metal having slowed her week's acceleration to just a +1.1% gain versus that of +6.5% the week prior, we skew our analysis back toward the yellow metal. Or perhaps better monikered, the flatlining metal.

Two weeks ago Gold settled at 1418. It then gained +0.6% to close a week ago at 1427. This past week it dropped -0.6% to again settle back at 1418 yesterday (Friday). Scintillating stuff. Or rather, Gold is just stuck. if you day-traded Gold this past week, you endured one flatlining session after another.

¦ the realization on 25 June of our "conservative" forecast high for this year of 1434.

And as we've pointed out, following both events there has been -- and continues to be -- much MetalsMedia rejoicing. But still in force per our missive from two weeks back, "Gold Stays Blah Despite the Rah-Rah". Indeed going back three weekly writings, "Gold: Near-Term-Churn Remains the Watchword", we therein wrote "nobody really knows what to do", (notwithstanding since then Silver's own robust trading opportunities).

We thus continue to maintain more of a toned-down view in having pointed out, too, that Gold's getting above this low 1400s area is simply not going to be a walk in the park. The bad news, you'll recall, is that "the mid-1400s were fraught with all kinds of trading consternation from April into May of 2013." The good news, as you'll also recall, is the dearth of trading activity from the 1400s up to the 1600s, the chart for which we've updated as follows: 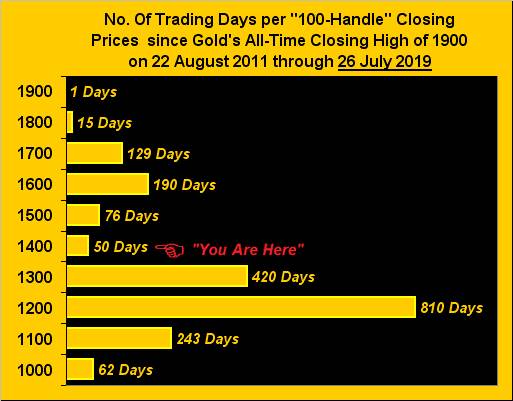 So don't be surprised if Gold continues to be "here" for awhile, even with the priced-in FedFunds rate cut come Wednesday. Got all that? Great. Now let's get into Gold's weekly bars as graphed from one year ago-to-date. And despite the accelerating pace of the parabolic Long trend's rising blue dots, price itself has taken on the appearance of a piston engine, (albeit lacking upside drive): 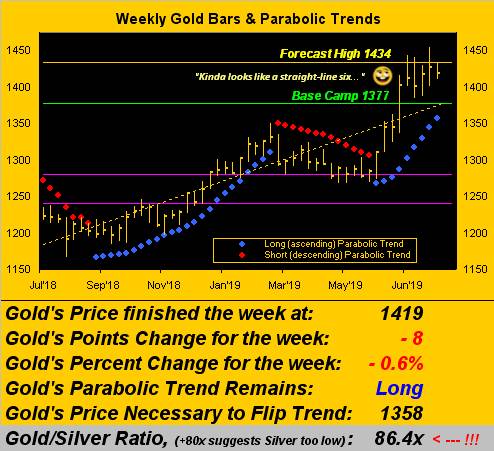 'Course, the downside drive of the Economic Barometer ought ultimately work to favour Gold's upside drive through the inevitable creation of more dough to makes things go. And this past week we just got our first StateSide peek at the annualized pace of Gross Domestic Product in Q2: +2.1%, which was quite slower than Q1's pace of +3.1%, but better than the +1.8% consensus expectation and notably faster than that forecast by the Atlanta Fed for instead just +1.4%. By a political check, the average "finalized" GDP growth pace across President Obama's 32 quarters was +1.9%; thus far through President Trump's 10 quarters 'tis +2.8%. But by the below Baro, GDP isn't the whole underlying truth (oxymoron), is it?

As well, historical separations of the Baro from the S&P 500 (red line above) ultimately resolve with the latter moving to the graphed level of the former. Yet with interest rates remaining relatively low, stocks still are the herd mentality's "way to go". However, the warnings we regularly wave are as warranted as ever:

¦ as noted per the Econ Baro, the S&P historically has always returned to the graphed level of the Baro;

¦ the moneyflow of the S&P is not supportive of the Index itself per this graphic:

Specific to those "Baby Blues" for the precious metals across the last three months-to-date, here they are for the daily bars of Gold on the left and Silver on the right. As stalled out as price has become for both metals, their respective blue dots turning back up -- after not having reached as low as the 0% axes on the way down -- we view on balance as bullish:

In turning to the 10-day Market Profiles we find Gold (below left) having trailed off underneath the dominant trading price of 1427, but look at Silver (below right): all that trading in the 16.50-to-16.40 area overwhelms the two-week trace of the Profile's space:

Into the new week we get the Federal Open Market Committee's Wednesday vote to cut the aforementioned FedFunds rate from the current 2.25%-2.50% target range down to that of 2.00%-2.25%. Not news, really, given that 'tis been long priced into the FedFundsFutures. 'Course, much shall be made ado over the FOMC Statement and Powell's presser. As well, 18 metrics are due to work into the path of the Econ Baro, so keep abreast of that via the website.

Those events noted, "Let's get ready to rollover!" is Gold's clarion cry as trading volume this coming week shall move from the August contract (presently priced at 1418) into that for December (presently priced at 1432). That is 14 full points of very bullish "contango", the most we've seen for any Aug/Dec rollover since at least as far back as 2001, the inference being that there is a willingness to lock in paying today $14/oz. over Gold's present price rather than wait to buy come December, (i.e. when one may then be obligated to purchase Gold such as to make delivery of it). But then again, why deliver your Gold when 'twill seek a still higher road? 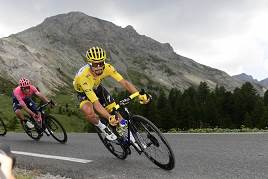