Palladium Collapses After Our Double-Top From Early July 2019

It was almost like Palladium traders followed our research to the letter when the trend reversed on July 11, 2019.  Our research team issued a report indicating a Double-Top pattern was setting up in Palladium on July 3, 2019.  At that time, our proprietary cycle indicators and our proprietary Fibonacci price modeling systems suggested a large downside price swing was highly likely. 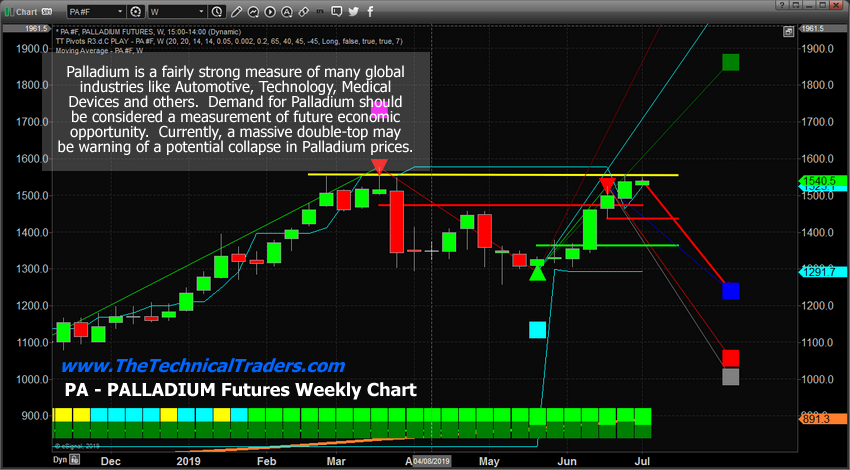 Palladium is a very interesting metal that is used in various industry sectors as a component for automobile equipment/parts, medical equipment, and many other industrial sectors.  It is a great leading indicator to help gauge future expectations for various global industries and as a measure of consumer/industrial consumption and expectations.  When Palladium is rallying, it is a fairly solid sign that consumers are bullish on the global economy and are purchasing equipment, autos and other industrial elements to support future growth expectations.  When Palladium is falling, it is a fairly solid sign that consumers are reigning in their spending on new cars and other industrial items that are manufactured with Palladium.

This Daily Palladium chart shows how the weakness in price started just after the price peak on July 11, 2019.  Over the past 3+ weeks, Palladium rotated downward towards the $1500 price level, then stalled.  Global traders were focused on earnings data, the US Fed announcement, and other data.

The recent breakdown is a result of three factors

These three factors will move the focus away from industrial use metals (Copper, Palladium, and Aluminum) and towards the more traditional Gold/Silver moves. 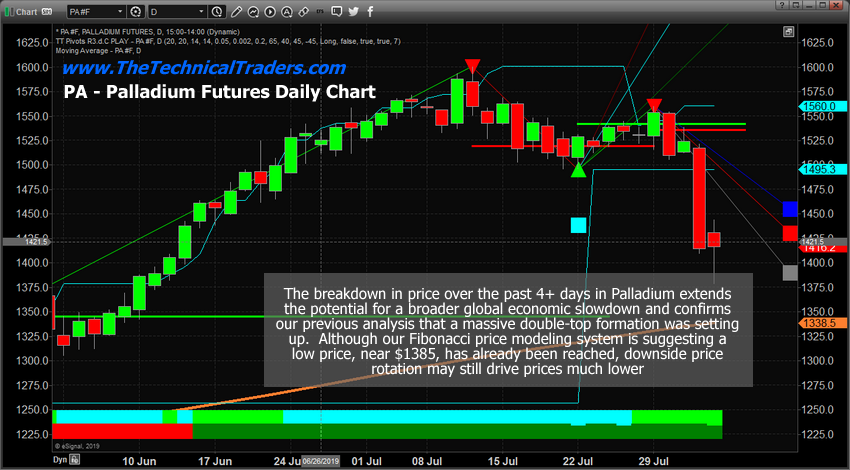 This Weekly Palladium chart highlights the Fibonacci price modeling system's lower target levels.  Pay attention to the fact that $1315 and $1000 are key downside target levels in Palladium.  The Daily chart Fibonacci levels suggest that minor support may be found near $1400.  The Weekly Fibonacci chart suggests major support is really down near $1000. 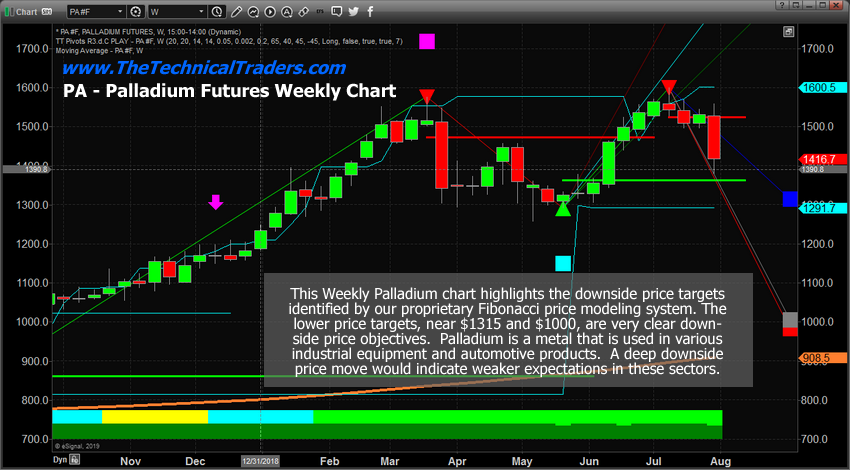 We believe once the $1475 level is breached to the downside, Palladium will quickly fall to levels near $1300 before briefly stalling and attempting to find support.  This move in Palladium aligns almost perfectly with our August 19 US market “Peak” prediction from months ago.  We believe the ultimate lower levels, near $1000, are a very strong possibility over the next 3+ months as we believe the global markets, and the US markets, are setting up for a fairly big price rotation after August 19, 2019.