For years (2013-2019), gold traded within a tight range. Before that, in the 2000s, the price went from $250/ounce to $1,900/ounce in 2011. That was the most unique bull market in history. No other asset class in history had EVER gone up eleven years in a row, without fail. In 2011, Central banks had to put the brakes on precious metals; currencies were weakening too fast and that hurt the economy.

In 2013, after the price corrected down from $1,900 to the $1,300s range, it stabilized for nearly 6 years, trading between $1,100 and $1,300, most of the time. Currencies regained their stability versus gold, but it was mostly the dollar that enjoyed strength, while other ones kept drowning.

In more than 83 national fiat currencies, gold now rades either at 52-week highs or all-time highs, including some of the commodity-based ones, like Canadian Dollars, South African Rand, and Australian Dollars.

2018 was the peak of this era of currency strength. The dollar became so relatively strong that it was the best-performing ASSET CLASS in the world – better than stocks, bonds, metals and emerging markets. That is a crazy anomaly, which signals an extreme, the end of an era and that's exactly what it was.

In 1969, two years before the most important currency event of all time, the Nixon Shock, which marked the end of the gold standard, the dollar was the best-performing ASSET CLASS in the world as well. You can see how rare that is. Washington understood, back then, that the dollar was artificially overvalued, since it was printing more currency units than the $35/ounce fix it supposedly anchored, so it had this secret to keep. It knew the dollar was in a bubble, so it forced the default by getting rid of the gold standard, instead of coming out, openly, saying they cheated the $35/ounce fix.

The world is in a funny situation today, because of that; the world's largest economy, the United States, is also the biggest debtor nation in history and its need for issuance of new debt is ONLY GROWING. At the same time, its currency is the reserve for the rest of the world and it makes up 61% of global currency units.

It's overvalued, but this time around, it's at a time when Washington wants it to be more "competitive," since the Treasury is paying $1.5B in INTEREST every single day, while other governments pay their lenders nothing. It wants a weaker currency.

The end result is that after 6 years of stability in gold prices, we're breaking out!

The U.S. dollar is the strongest major currency, by far. The demand for it in these uncertain times is massive. This becomes especially evident when realizing that the Treasury pays the highest interest rates of all developed economies.

The dollar is TOO TRUSTED (hard to believe).

Russia has jumped ship, though, and will soon prove that it can stabilize its currency using gold reserves. China will attempt to break loose of the dollar in the next 5-10 years and by 2029, once millennials’ peak employment is reached, the U.S. will not have the same status and empire symbolism it still possesses. It will stagnate.

This decade (2020-2029) marks the transition and some people will benefit greatly from it, while others will lose a fortune. We stand to greatly benefit, by owning metals.

What's happening now is a return to the policies of the 1970 period. Trump is Nixon 2.0 (on the dollar matter) and there is no official gold standard, but there's a way to make the dollar weaker and that's through lowering rates to zero, which would be MIND-BOGGLING to investors that buy bonds as a safe haven.

Right now, we're in a clear inflection point. Fund managers will begin to allocate clients' money into precious metals and chase the trend.

In mid-September, the FED will meet and decide where interest rates should go.

The likelihood of a recession is extremely high and not only is Rabobank putting it at elevated levels, but so is JPMorgan! 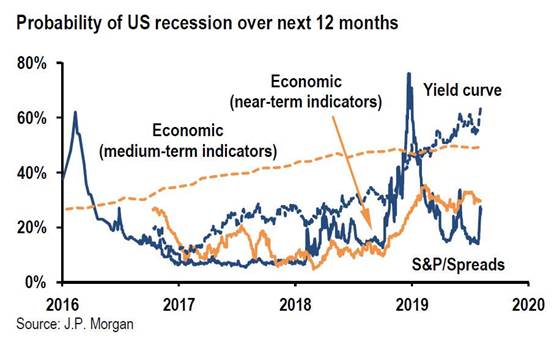 I've received scores of emails asking me if I think the commercial shorts, the banking cartel, won't try to stop this from happening. Understand that it is now their AGENDA to have higher gold prices.

Expect the most monumental announcement in our newsletter's history in the coming days.