Sector expert Michael Ballanger draws connections between nefarious non-native species in the natural world and in the world markets. 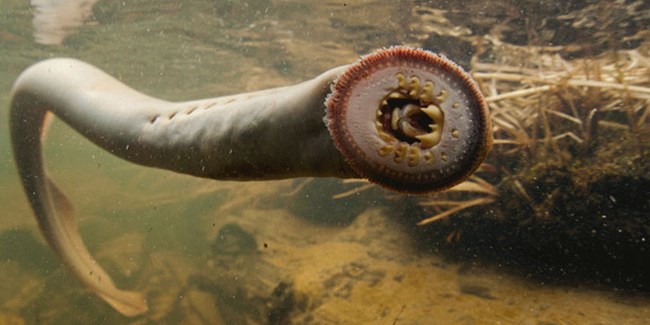 Invasive species: Any kind of living organism—an amphibian (like the cane toad), plant, insect, fish, fungus, bacteria, or even an organism's seeds or eggs—that is not native to an ecosystem and causes harm. They can harm the environment, the economy, or even human health.

In the 1830s, a creature called the "sea lamprey" was first detected in Lake Ontario after it was able to migrate from the Finger Lakes of upstate New York by way of the Erie Canal, which was constructed in 1825. In the 1800s the Great Lakes fishing industry harvested over 100 million pounds of fish for both domestic consumption and export before this incredibly creepy creature laid virtual waste to the fishery stock. Within one hundred years, the harvest had dwindled to approximately one-third of its peak as the absence of natural predators allowed it to feast on the Great Lakes fisheries with reckless abandon and unopposed execution.

As ugly a species as it was, the sea lamprey was especially efficient in its mission, as tens of millions of pounds of succulent freshwater nutrients was eliminated from the Great Lakes yield because of its unchallenged status as a free-range aggressor.

The first time I saw the famous illustration of Rolling Stone magazine's famous "vampire squid," with "its blood funnel attached to the face of humanity" (in reference to Goldman Sachs), I thought of the sea lamprey, attached to the sides of Lake Ontario trout and further thought of the Canadian and American banking cartel, whose influence over Canadian government policy is indisputable.

Then there is the case of the "zebra mussel," another of the invasive species that are now covering a massive portion of the Great Lakes floors, and that filter most of the phytoplankton from the water. As well as starving the fisheries from the oh-so-vital nutrients that have lived in microscopic freedom since the vast saltwaters dissipated thirty million years ago, they spawned another new form of invader in the form of the "goby," a fish that was equipped to crack shells of the zebra and quagga mussels, thus enabling a natural predator to arrive. The problem is that both goby and quagga are foreign,and they simply do not belong in these lakes, the largest natural source of fresh water in the world.

It is not only ecosystems that find themselves endangered by invasive species. The global system of finance, commerce and trade used to function largely unencumbered by government policy, which tolerated and, in fact, promoted interference in the ebb and flow if the free market system. The Working Group on Capital Markets, established during the Reagan-Greenspan regime, has metastasized into a massive interventionalist tumor spreading its cancerous reach into all markets foreign and domestic. This is the zebra mussel of the late twentieth century, and its presence continues to be an entity "that is not native to an ecosystem and causes harm." What began as a mechanism to prevent stocks from crashing is today an invasive instrument of flawed policies, fiscal, monetary and foreign.

Lastly, we have the case of the infamous Asian carp, a bottom-feeding fish that is supplanting the finest-eating food fish in the world, the mighty Canadian pickerel (or walleye, as the Americans would have it). Most of the invasive species that come flooding into our western lakes and rivers did so without the assistance of Mother Nature but rather the ill-planned actions of mariners arriving from Eastern European and Asian locales.

As I was discussing the plight of the Great Lakes fisheries with a learned local lad from a small Canadian town located some fifty miles south of the Sudbury, the site of the largest nickel deposit in the world, I was immediately drawn to his love of home, of his surroundings, of his environment. He explained that his father and grandfather had been raised in the Ontario Northlands and had a deep and unfaltering love for the land which, if treated properly, could and would provide all that was needed for them to live a full, healthy life—albeit one that was absent any form of fanciful accoutrements or lavish touches. He also explained that it was the arrival of foreign cultures that caused disruptive change, and was quick to add that his choice of the term "foreign cultures" meant no disparagement to anyone of ethnic designation. His reference to "foreign" was meant to address those "not from around here," but unfortunately (or fortunately), it describes a world ill-equipped to deal with the insertion of invasive people, whose assumptions, expectations and behaviors are, quite simply, "foreign."

I descend upon this delicate region of debate because it is deeply troubling for those who dwell in places that have had families (or tribes) dominating the landscape for centuries, always in perfect harmony and effortlessly synchronized with the environment. I have been writing for years about the risks that face Canadian (and North American) society, but as the years have passed, and conservative attitudes have been replaced with overbearing liberalism and entitlementism, I have to soften the entry into this hair-trigger debate with allegories and anecdotes that get my point across without offending any person or group that senses anything vaguely resembling an ethnocentric bent.

Forty years of trading in commodities, stocks and bonds have left me with angst far harder to convey than I would ever have imagined possible. The reason is that the investment environment in which I was trained is now dominated by numerous invasive species that plunder and pillage every nook, cranny, and sector, leaving nothing in their wake worthy of effort. Computerized trading utilizing sophisticated algorithmic software is now the Asian carp of order execution, growing in number and size, and forcing historically dominant species (such as human traders) to extinction. The advent of exchange-traded funds (ETFs) inserted quagga mussels across the broad expanse of equity exchanges the world over, such that no trade in any ETF is allowed without the accompaniment of a half-a-penny fee.

However, the singular most insidious event has been the complete and total dominance of the banks in their insatiable appetite for control of all things related to money. In particular, the bullion banks are the "lamprey eel" of global precious metals trading, attaching themselves to all facets of the bullion markets extending to bonds, currencies and, of course, stocks.

Since the enactment of the Federal Reserve Act of 1913, the banks have been granted unprecedented power over all things related to money and, more importantly, credit. Their debasement policies, designed to aid and abet all things related to banking, have been the sole reason for the reserve currency status of the U.S. dollar. By layering massive tranches of credit on top of one another over the years, they have succeeded in forcing over 65% of all issued credit to be negative-yielding instruments whose practical utility is not only absent, is also insane.

However, just as dark are the skies moments before sunrise, it was in the late 1960s that Canadian and American scientists responded to massive domestic outrage and set out to rid the lakes of these parasites. They first cross-bred brook and lake trout in an effort to control the roe of the lamprey, but after proving unsuccessful (the females could only produce male splake), the researchers developed a lampricide chemical that retarded the development of the hatchlings and was so successful that it reduced the lamprey population by 90% by 1990. Public outrage was so intense that progress came on the backs of the politicians. Votes motivated action and change was the result.

Similarly, after nearly eight years of interference, intervention and suppression, this lamprey of government-condoned management of precious metals prices has finally met with its own chemical predator which is best described in one word: mistrust.

Now, it is my belief that after nearly forty years of government intervention and fictitious reporting of inflation and purchasing power figures, public mistrust is going to trigger political action that will rid the financial ecosystem of parasites of all kinds. Assuming the role of a bankricide" designed to reduce the growth of financial system parasites such as JPMorgan or Goldman, mistrust would yield dramatic changes in savings rates, purchasing power and living standards as the number and size of the blood funnels are reduced. It is long overdue and badly needed.

However, for the immediate term, it is no surprise to followers of my work that gold and silver are now in full bull market bloom—and are taking the gold and silver miners up with them in what has been a breathtaking ascent. So that you have no doubts, let it be known that I detest those bloggers or commentators that are constantly in need of performance reinforcement by reposting (sometimes multiple times during a day via Twitter or Instagram or Facebook) how "brilliant" they have been. My record is out there and I happily declare that I exited my leveraged ETFs when the RSI (relative strength index) for gold first punched through into the mid-70s, which represented a $26 NUGT at $20 (paid $15) and JNUG at $45, or $9 pre-split (paid $32.50 or $6.50 pre-split). Since the major breakout at $1,375, the RSI for gold has remained elevated, spiking to nearly 90 in June, correcting in July, and now surging to the mid-70s again here in August. 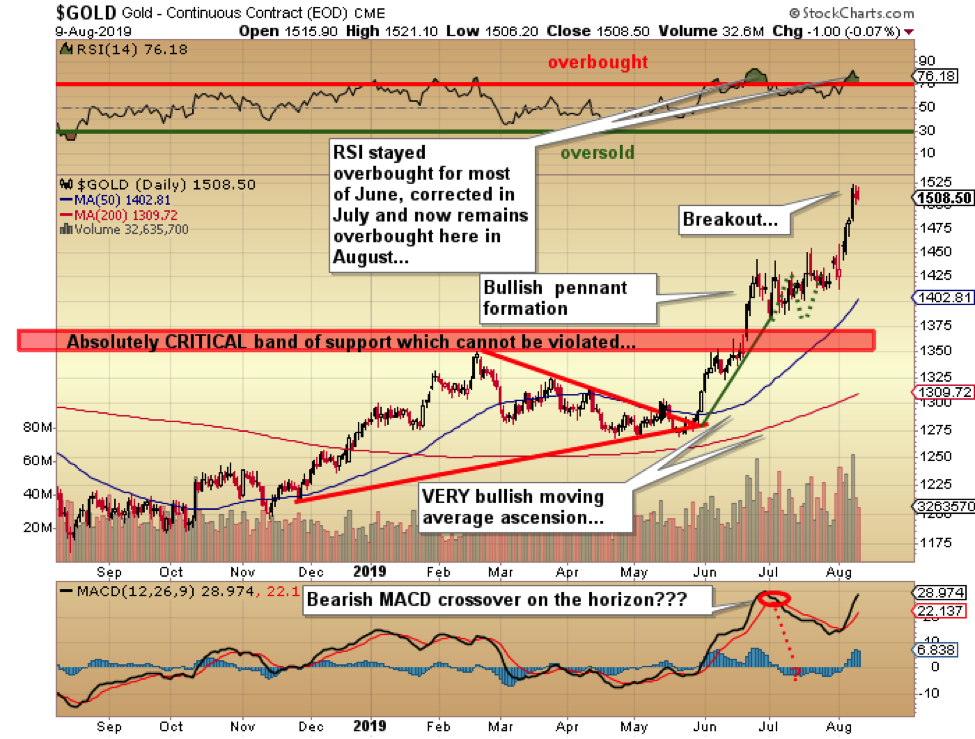 The bad news is that the Commercials are once again going all-out to cap the advances in gold and silver, such that the aggregate short position is now approaching a record 325,000 contracts. The danger lies in the DSI (daily sentiment index) number, now at 95% bulls with managed money and retail piling on. 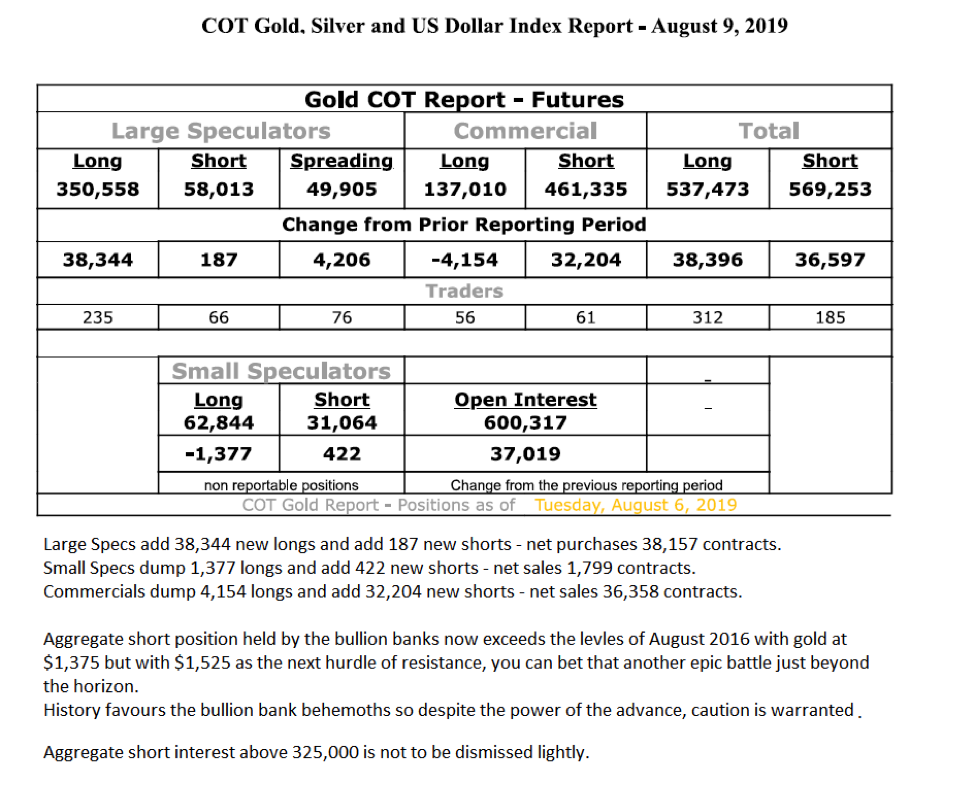 I am taking 50% positions in GDX and GDXJ off the table this week by selling 25% of both on the opening Monday, and then offering the additional 25% at GDX $30 and GDXJ $43 good through Friday.

It is my lifelong dream that the invasive species of government interventions, price management and Atlas Shrugged-style favoritism is vanquished once and for all by a global mistrust that serves to level the playing field. Whether it is lamprey, goby, zebra mussel or Asian carp, these organisms do not belong in our North American waters and behaviors most foreign to the long-term health and sanctity of free markets can no long be tolerated. Mistrust is the financial and political pesticide of the day, and the larger it grows, the better off we, as a society, will be.

Originally trained during the inflationary 1970s, Michael Ballanger is a graduate of Saint Louis University where he earned a Bachelor of Science in finance and a Bachelor of Art in marketing before completing post-graduate work at the Wharton School of Finance. With more than 30 years of experience as a junior mining and exploration specialist, as well as a solid background in corporate finance, Ballanger's adherence to the concept of "Hard Assets" allows him to focus the practice on selecting opportunities in the global resource sector with emphasis on the precious metals exploration and development sector. Ballanger takes great pleasure in visiting mineral properties around the globe in the never-ending hunt for early-stage opportunities.