The Recession-Proof Industrial Metal Just Got a Big Boost

The drumbeat of bad news for the global economy keeps getting louder and more insistent. I take no pleasure in other people’s misfortunes, but as a speculator who saw this coming, my portfolio is well positioned to profit from the downturn. But that’s not just because I loaded up on great gold and silver stocks when they were selling cheap. There’s another metal that should do well over the next two years, whatever the global economy does: uranium.

I know some people think I’ve spent too much time kicking rocks at uranium mines. The radiation has gone to my head. Uranium’s latest rally has faded. The Section 232 hype resulted in disappointment. The stocks are in the toilet. Companies are shutting down.

Except for the radiation damage to my brain—I think—that’s all true.

And that’s precisely what makes uranium stocks such a great speculation today.

It’s because uranium is even more hated today than gold and silver stocks were a year ago that it’s such a great opportunity.

Let me ask you: if you had a stock-trading time machine that could go back and buy some of the obvious winners that were on sale last summer, would you use it?

That’s not possible, but when essential commodities are oversold and related stocks are ridiculously cheap, it’s as close as it gets in the real world.

And make no mistake, uranium is essential.

The US relies on nuclear power for about 20% of its electricity. It’s 80% in France. It varies in other countries. And, despite its lack of popularity in the West, BRIC countries are building new pants at a rapid pace. It would take decades to replace all this stable, base-load power supply—if it can be done at all.

Plus, the popularity issue may be turning around, as increasingly desperate climate change warriors are starting to jump on the nuclear bandwagon. For all the fearmongering relating to nuclear power, it remains an uncontested fact that it’s the fastest way to cut carbon emissions without plunging the world into a new Dark Age.

People may cut back on vacations and buying new cars during a recession, but they’ll still turn the lights on at night.

Yes, uranium is down this year. However, prices bottomed in 2016 and remain on an upward, if volatile trend. 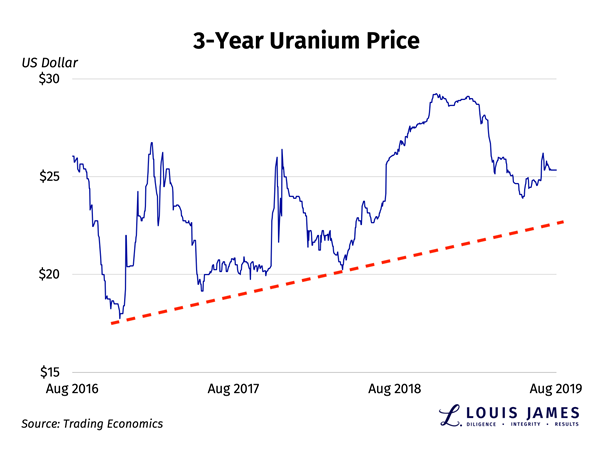 My technical analyst friends tell me that the series of higher lows is particularly important. As long as that continues, we can say that uranium prices are on a multi-year, upward trend.

The reality is that uranium is vital, irreplaceable, oversold—and its price recovery is just beginning.

You may have heard of the Section 232 drama earlier this year. The petition by some US uranium producers for government intervention into the market seemed like a good idea to them at the time, but it may have contributed to the current dip, as buyers awaited the outcome before making purchasing decisions. Unfortunately, Donald Trump did not take action to support US producers when expected, and related shares fell off a cliff.

That may actually be the most fortunate thing in this whole story, for those new to uranium. Trump may still support those US producers when his working group on the subject finishes their study, now expected by mid-October. But even if he doesn’t, the upward trend remains bullish for all the best uranium stocks—and they’re on sale with everything else.

You may also have heard a rumor that Kazakhstan, the world’s largest uranium producer, plans to flood the market with cheap uranium in an OPEC-style move to crush competition. I never believed this. If they were going to try, the time to do it would have been back in 2016 when uranium was selling for $18 per pound. Instead, they announced production cuts, which are a large part of the reason why uranium prices have begun recovering. It would make no sense for them to kill their own price support program when prices are still so low, Kazakhstan is depleting its mines for peanuts.

At any rate, it seems I was right. Kazakhstan’s state-owned uranium company just announced that it will extend its 20% production cuts through 2021. This is huge boost—an extremely bullish factor, going forward.

There’s a lot more I could say, but the bottom line is that it’s easy to talk about being a contrarian investor, but it’s hard to do. If you look at uranium stocks and want to run the other way, you’re not alone. And that’s exactly why you should consider buying them—but only if you have the guts to stay in the trade and see it through.

Note that I’m not promising that uranium stocks are about to leap higher.

That could happen, but it could also take a while. It’s also possible that another Fukushima type event will stop the uranium bull in its tracks.

I am proposing a speculation, not a safe investment.

But the potential upside here is huge…

That last time uranium made a major breakout, it went from about $7 to $140—and the stocks went to the moon.

Again, I’m not promising that this will happen. But that card is certainly in the deck. And I’ve bought the stocks I think are best positioned to make the most of it.

Which ones? Well, that—and my gold and silver picks—are what Subscribers to The Independent Speculator pay for. You’re welcome to join us, but I’ve no hard feelings if you decide to do your own due diligence and go it alone.

If the case I’ve presented results in your taking action that makes you a lot of money, I just ask that in the future you remember that I helped you out.