Is Rhodium Pulling A Thelma & Louise On Us? 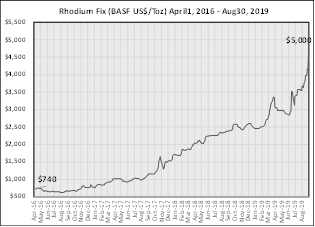 I have claimed that this minor PGM has been driving off a cliff for several reasons.  Here they are:

1) Demand keeps climbing even with global vehicle sales flat.  Auto Catalyst demand keeps climbing for Rhodium and Palladium both. It ends up big auto loves Rhodium for its ability to suppress NOx, a critical emission thattightens each year now int he EU and US/CARB standards.  A look at 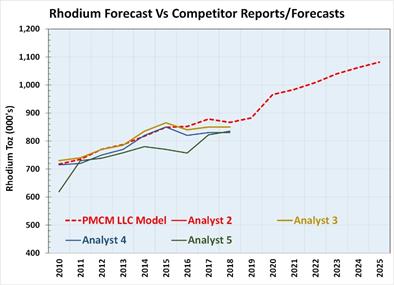 my Auto Catalyst demand model and comparing to other precious metals industry analysts, we see some relatively good agreement:

2) Rhodium mined supply is diminishing over the next 15 years.   The oldest PGM mines in So. Africa are approaching end of life.  As they do the projected mined output of many of these Western and Eastern Bushveld Complex mines will reduce.  This is especially important to the UG2 Reef where the composition of Minor PGM's is at the highest in the world.  All of the new new Zimbabwe and So. African Northern Limb projects will not harvest enough Rhodium to offset the declines in the UG2 reef. 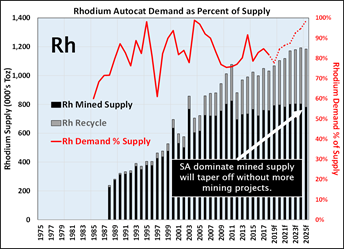 3) Auto Catalyst Recycle has hit some new SiC bumps in the road.  SiC levels are higher today than ever, and climbing. This has the effect of mucking up the PGM smelters and refine, forcing more frequent cleaning of the systems, lowering output, when we need more.  Frankly we need aggregate PGM Smelting capacity additions just to keep up with increasing available recycle streams. 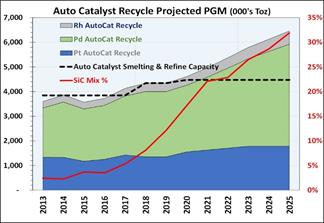 This is a direct by-product of Diesel-gate.  Forget just shoving the sensor up your tailpipe and revving the engine for a few minutes, the testing protocol now forcestesting under different loads, up hills, at full speed on the freeway, etc.

5) Gasoline/Electric Hybrids like the Toyota Prius have increased PGM loadings.   You wouldn't think that, but the most stressful load on emissions is during a "Cold 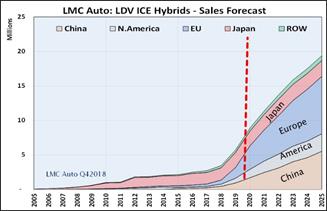 Start".  Hybrids do a lot of on and off starts.  It is extremely stressful in Real World Testing when a Hybrid is running off electric going full speed, and then the engine kicks in.  More loadings are needed to manage those transient spikes in emissions.  Oh and the demand for these is at a huge inflection point.

7) Decline of Diesel vehicles in the EU, shifting more to Gasoline and Hybrids.  Diesel PGM Catalyst designs use less rhodium than gasoline.

8) Little Rhodium Investment Populations to draw on.  Palladium and Platinum have much larger pools of investment bullion and global 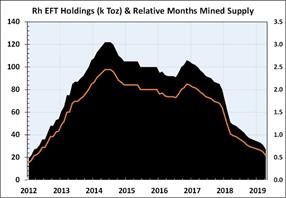 ETF position to draw on.  Rhodium has very little, and it’s almost all be consumed in the past few years.

Thank Goodness for the Slowdown:   I often tell people thank goodness for the Global economic slowdown and the US-China Trade War.   What a mean thing to say.  Except with you think if China would have remained on the Gasoline CAGR it was on, since 2017 there would have been an incremental 16M vehicles sold.  The incremental Rhodium loadings would have generate a 100k Toz of Rhodium demand, or approximately 2 months mined supply.  Today's $4,200 a troy ounce would be much higher would this have happened.

All signals are up.  The rhodium ride is not over.  Let us all hope big auto and regulators come to solid conclusions about how to manage this.  When Rhodium climbed to $10,000 before, the market collapsed and many of my Precious Metals peers lost millions in the process.  I think we would all hate to see that again. 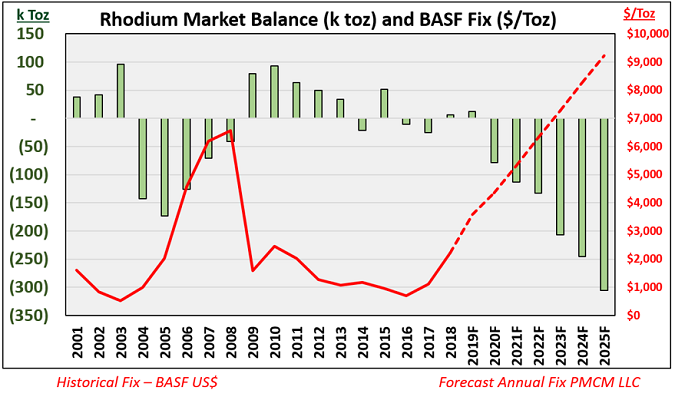 MattWatson@PreciousMetalsCommodityManagement.com
https://www.preciousmetalscommoditymanagement.com
Disclaimer: The views expressed in this article are those of the author and may not reflect those of Kitco Metals Inc. The author has made every effort to ensure accuracy of information provided; however, neither Kitco Metals Inc. nor the author can guarantee such accuracy. This article is strictly for informational purposes only. It is not a solicitation to make any exchange in commodities, securities or other financial instruments. Kitco Metals Inc. and the author of this article do not accept culpability for losses and/ or damages arising from the use of this publication.