Yes, near-term dip-wary as we remain for Gold, it indeed put in a meek down week, settling yesterday (Friday) at 1529 for a net loss of -0.5%. However:

We've gone on quite a bit for better than a year about the historically high (understatement) Gold/Silver ratio, its regularly running 'round 30% above the millennium-to-date average of 64.7x, such that Silver has been far overdue to outpace Gold on the upside. And at long last, 'tis happening: "Silver, Baby!" as was the title of our missive six weeks ago! And 'tis a beautiful thing. To wit:

As recently as 06 August, Gold settled its trading day at 1486.5 and Silver at 16.455, the Gold/Silver ratio then 90.3x. Toward pounding down that ratio to today's 82.7x reading, here are these two precious metals percentage tracks from 06 through 30 August, Gold having increased in price by +2.9% ... and Silver by +12.3%! That's four times the pace of Gold! Gold can't compete with the Silver Streak! 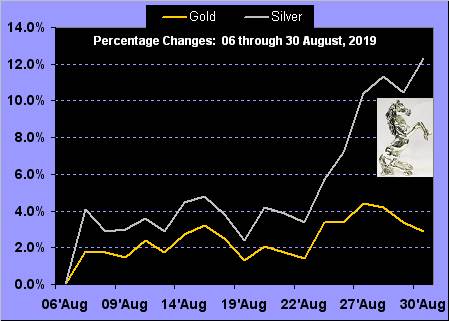 'Course we ought not be surprised, you regular readers understanding that righting the ratio has been long overdue, moreover that there remains a long way to go. And foundationally: Silver is getting a pure bid irrespective of how any of the other BEGOS Markets (Bond, Euro/Swiss, Gold/Silver/Copper, Oil, S&P 500) have been trading. As penned in Friday's pre-dawn Prescient Commentary: "Only the Spoo +0.7% and Silver +0.5% are in the black (an unusual pairing)..." Might as well "search" for your "Silver Correlations" workbook and then press "delete", for Sister Silver's riding her own horse now: indeed "Hi-Yo Silver!"

As for the mighty yellow metal itself, it did languish back to our "aggressive" forecast high for this year of 1526 as we next see here per the rightmost weekly bar, but not before achieving its highest trade -- 1565 -- since 11 April 2013, (the day just prior to the three-day plunge down to 1322 and the run on pharmacies' peptic products). And whilst breakouts breed extremes, we're mindful of Gold's excessive price distance above the diagonal dashed trendline in the graphic. But nonetheless, the overall picture is "Wow!":

Want some more wow? It being month's end we can wow over this, the percentage tracks from one year ago-to-date of Gold along with key precious metals equities. And what stands out in the chart this time 'round? For the first time in (seemingly) forever, every entity is higher! Here's the meat (and these ain't typos): Agnico Eagle Mines (AEM) is +80%; the VanEck Vectors Gold Miners exchange-traded fund (GDX) is +60%; Franco-Nevada (FNV) is +49%; Newmont Mining Goldcorp (NEM) is +28%; Gold itself is +27%; the Global X Silver Miners exchange-traded fund (SIL) is +25%; and year-over-year in the black at long last is Pan American Silver (PAAS) +18%. Wow indeed! (And by special request from certain of you scoring at home, whilst not shown, mighty Silver miner First Majestic (AG) is +99%, which is 3.5x the increase in Silver itself of +29%). Got leverage?

As to where the precious metals stand in the overall scheme of our BEGOS Markets, here's the year-to-date table of their percentage performances. Just two months back at June's end, Silver was in last place. Today shining Sister Silver is starring on the podium along with Gold and Oil. Still got stocks? (Oh dear...):

Speaking of stocks, let's next turn to the Economic Barometer wherein we see the S&P 500 engaged in full, lost, saw-tooth mode, whilst the Econ Baro itself actually appears to be leveling off. How did Federal Reserve Bank Chair William "Want It Both Ways" Powell put it a week ago at the base of Wyoming's Tetons? "Our economy is now in a favorable place, and I will describe how we are working to sustain these conditions in the face of significant risks we have been monitoring." Just in time for the opening of the StateSide football season, eh? Favorability vs. Risk on the field at a stadium near you, with the halftime performance by China. Here's the Baro, buoyed this past week by the Chicago Purchasing Managers Institute's August read crossing back up above the key 50 level (indicative of expansion) and Jul's Personal Spending coming in at a robust +0.6%, (but all on the ole credit card?)

As to further mention of our being "Gold-dip wary", here is the two-panel graphic of daily bars from three months ago-to-date for Gold on the left and Silver on the right. And again our technical concern is Gold's "Baby Blues" continuing to slip below their +80% axis, the caution for which is lower price levels near-term. Nothing drastic, mind you, but a run down to the July high (mid-chart) at 1454 wouldn't surprise us a wit, barring August's price-clustering (1546-1489) instead keeping price supported. Silver's "Baby Blues" have indeed just marginally regained their +80% axis, but should Gold slip, can Silver maintain her grip?

Specific to price and volume traded for the past two weeks, here are the 10-day Market Profiles for Gold (left) and Silver (right). Although Gold has slipped below the heavily-traded 1537 level, Silver is (for the present) at the peak of that whole bevy of denoted trading supporters:

So as we close out August for Gold, hardly was it a month of so-called "dog days". In the following graphic of Gold's Structure since price's All-Time High, August was Gold's fourth consecutive up month -- and save for this past June's strong performance -- price's best up month on both a points and percentage basis since June 2016. The wee chap at lower right doesn't believe it, but he ain't on top for a reason. And 'tis grand to see Gold having finally escaped up from the basement (sous-sol) onto The Floor: 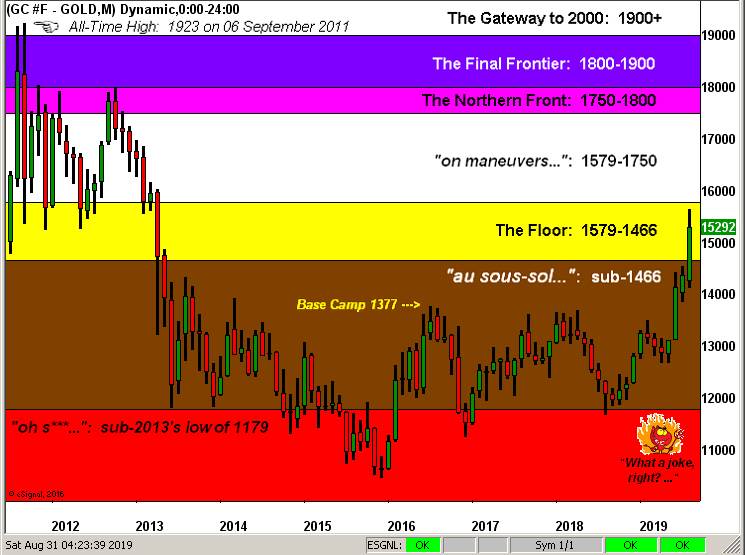 Two-thirds of 2019 is in the books with Gold lookin' great and Silver a-sizzlin'. Dips en route notwithstanding, the fervour is such that you wouldn't wanna bet there's no upside left. To be sure, the precious metals have come a comparatively long way up this year, as is their wont when (as we're finally seeing) they get noticed. But 'tis not too late to participate! For as Mark Twain succinctly stated: "The secret of getting ahead is getting started." Which in the Big Picture is only what the precious metals are just now doing. So don't miss this train! 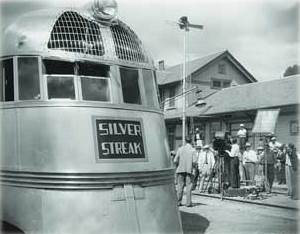