Silver: happening now, but it's not too late

I’ve been reminding readers this year that in a major precious-metals bull market, silver usually lags gold, then goes screaming higher faster. I predicted the gold and silver breakout of 2019 in January, but ever since silver showed signs of getting going in July, I’ve been urging readers to load up on quality silver plays. I argued that though it can take silver up to a year to really get going, too early would be better than too late. With silver not only rising with gold, but now rising visibly faster than gold, it’s becoming urgent for any who’ve not boarded the silver rocket to do so before it blasts off. 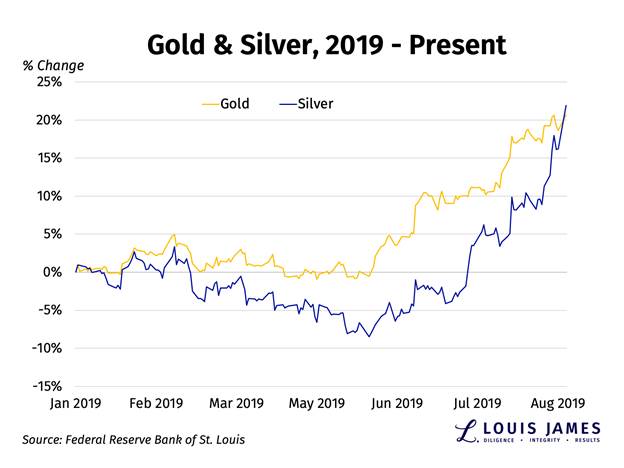 Key point: it’s not too late.

As you can see on this 10-year chart, the silver story is just getting going. 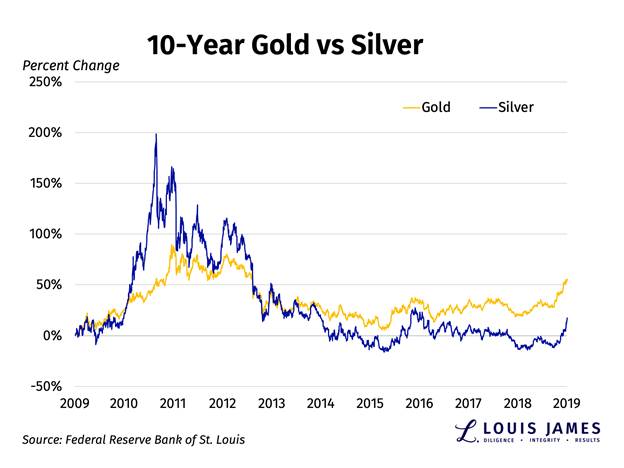 We don’t. But the ingredients are there. Precious metals are rising, driven by entrenched trends that don’t seem likely to change anytime soon. The global economy is decelerating, which is likely to curtail production at the industrial metals mines that produce most of the world’s silver. And silver has long been more volatile than gold.

All of this combines to make a perfect storm that could send silver into one of its mini manias, like the one in 2010.

Silver could just catch up with gold as both trend higher.

And as a market analyst—not a cheerleader—I have to say that it’s possible that the trade war will end soon, Brexit will be cancelled, the US yield-curve inversion is wrong about a coming recession, and the global economy will rebound into strong growth soon. Not likely, but within the realm of possibility. This would derail both gold and silver.

Since I don’t believe any of these things, I’m putting my own money on gold and silver rising. And since I’m doing that anyway, it only makes sense to load up on great silver plays to reap extra rewards from a possible silver mania.

Even if there’s no mania, with silver pushing $20 per ounce, we will see a major boost to profitability of the better silver producers. The projected economics of explorers and developers advancing silver discoveries will improve as well.

You may recall that I’ve written that I don’t want to speculate or the inevitable or even the imminent. I want to bet on things happening now. That’s silver.

And best of all, silver is still relatively cheap.

To make sure you get my latest takes on metals and other markets, please sign up for our free, no-spam weekly email, the Speculator’s Digest.