The US dollar vs. Gold - has something changed?

Gold is priced internationally in US dollars. So generally, when the USD rises, gold drops, and vice versa. But over the last year, gold and the USD seem to be rising together. That’s a strong indication of safe-haven demand driving money around the world into both gold and the USD. You can see both the overall inverse relationship and the recent exception clearly in a long-term USD vs. gold chart. 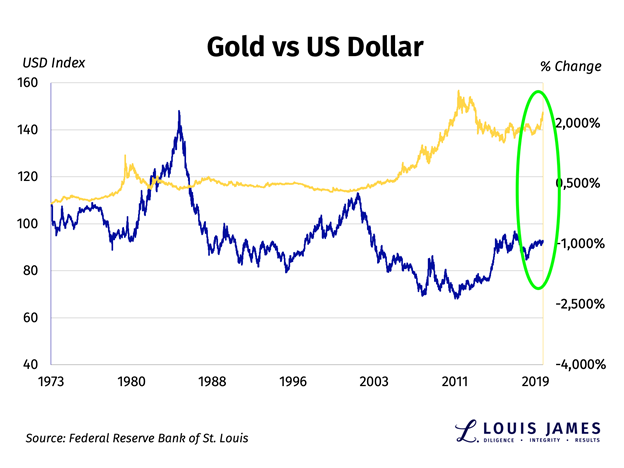 That much is obvious. What’s less obvious is just how rare this is. There seem to be a few times when gold and the USD spiked together since the early 1970s, when the price of gold was freed when Nixon closed the gold window. But if you look carefully, the most notable spikes are not at the same exact time. The inverse relationship holds.

Hold on—haven’t we all seen times when safe-haven demand clearly drives both the USD and gold higher? Yes, but most of those tend to be very short lived. We’re talking daily price movements. Sometimes weekly. The fact that such short-term moves aren’t even visible on the chart shows that they don’t really matter that much.

The extraordinary rarity of the current circumstance—a volatile but sustained move into both gold and the USD—tells me that something big is going on.

And even more striking is that gold is rising much faster than the USD. The gold line is accelerating upward while the USD line is decelerating. If those curves continue, the USD will be falling hard and gold will be hitting new nominal highs within two years.

That’s a big “IF,” of course. I’m not making that call. All the more so since the USD may follow gold’s lead upward—whether it deserves to or not—if the global economy tanks and central bankers around the world panic in that timeframe.

Regardless, it’s important to think about what these curves are telling us.

But what if the trends change?

Almost 50 years of data say that gold and the dollar rising together won’t last long. This anomaly could be corrected by either the USD rebounding and gold falling, or the opposite. But which is more likely?

Well, is the volatility and fear driving people into safe-haven assets likely to end soon?

I don’t think so.

Has the US central bank pivoted to a weaker dollar stance?

With rate hikes fading in the rearview mirror in the US, we may well see a period of substantial USD weakening, as we did in the years after the crash of 2008.

So why has the USD been strengthening despite the Fed throwing it under the bus in favor of prolonging the US’s economic party? Because things have been getting even worse in much of the rest of the world. The USD isn’t stronger. It’s just that other major currencies are weakening faster.

That’s extremely bullish for gold—whichever currency is winning the race to the bottom at the time.

All of this begs the big question: “When will people around the world lose faith in the US dollar and see it as just another piece of paper of no special value?”

Well, folks should have realized this long ago. Unfortunately, the petrodollar system has propped up the USD ever since Nixon killed what was left of the gold standard in the US. That system is starting to fray, with China and Russia pulling on the threads to unravel it as fast as they can, but it still stands.

While the petrodollar system endures, I think that even great weakness in the US economy and policies obviously destructive of the USD’s value will hurt, but not dethrone, the dollar.

Remember that in the global economy, a major downturn in the US economy would have serious consequences for just about every other economy in the world. If other countries are hurting and trashing their own currencies at the same time, the USD could still look like the least leaky among a fleet of sinking ships.

But someday—and it may not be very far off—the USD will lose its last special characteristic.

… and gold and silver will reemerge as money.

Go ask someone with a working crystal ball.

I’m just happy to own gold now and to see it doing its job as a safe haven.

The tides of history are shifting. I’m confident I’m on the right side.

P.S. To make sure you get my latest takes on metals and other markets, please sign up for our free, no-spam weekly email, the Speculator’s Digest.