Do two weekly declines make a case for lower gold ahead?

It’s nothing to worry about, gold and silver will rally back up shortly – most analysts say right now and also said in the mid-90s.

…Only except that they won’t – at least not for several months. Is anything different now than it was during other gold corrections in the past couple of months? Yes. There are three major details that prove that this time really is different. First, it’s the fact that gold declined for two weeks in a row and it’s the first time since April when this happened. Second, gold and silver declined even without USD’s strength and the latter is refusing to decline even despite bearish news. Third, gold stocks just closed the week below their rising support line, and their August high. If anyone doubted whether mining stocks are underperforming, that’s the final proof.

Let’s take a closer look at what happened with the yellow metal.

Another Weekly Reversal in Gold 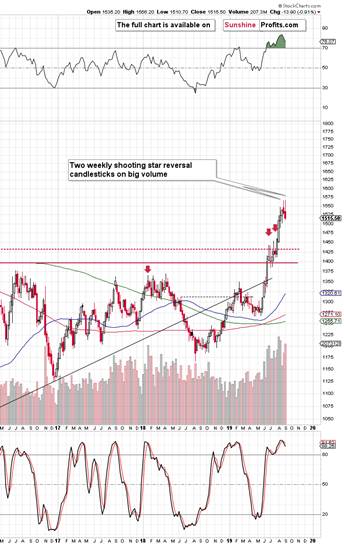 Gold has not only declined in the last two weeks. It has actually reversed, and it happened on significant volume. It also happened while the RSI indicator has been above 70, indicating overbought conditions.

In particular, it’s worth keeping in mind enormous potential of the USD Index. It’s after a major breakout in 2014/2015 and three verifications thereof. The 2017-2018 decline which seems huge on its own, was just a verification of a much bigger (and thus more important) pattern. 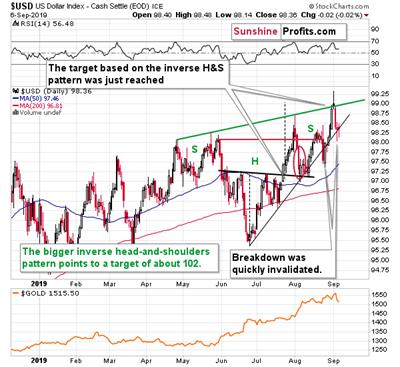 The USD Index may have not broken above the rising green neck line of the likely inverse head-and-shoulders pattern, but it managed to close the week without breaking below the rising support line. No political tweet was able to trigger a breakdown, or a visible comeback below the May highs.

Investors and analysts tend to forget about the big picture, while focusing on the short-term movement, which means that the more important development that last week’s close meant, has gone under the radar. 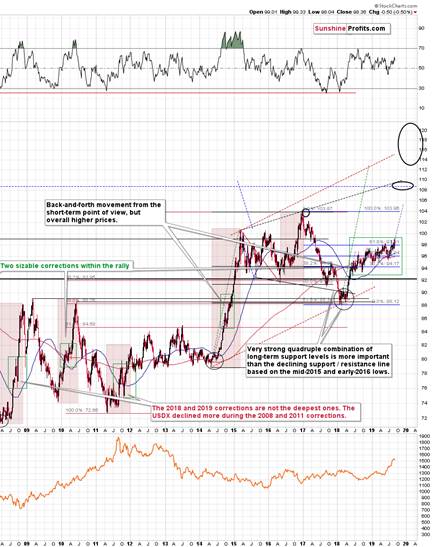 And that was the fact that the USDX finally closed the week above the 61.8% Fibonacci retracement level based on the 2017 – 2018 decline. Technically, this means that the 2018 – now upswing should no longer be viewed as a correction within a downtrend, but rather as a new uptrend.

Please note that even though gold’s upswing from the 2015 low was sizable, gold didn’t move above the 61.8% Fibonacci retracement based on the 2011- 2015 decline. This upswing can be viewed as – big, but still – just a correction within a downtrend.

With the USD Index in a massive rally mode, and gold just having shown two major weekly reversals, the next several months look particularly unfavorable for the shiny metal.

The previous links include details of the analysis of the gold stocks to gold ratio and the situation in copper, but it seems it would be a good idea to show you how the situation developed recently.

The Copper and Miners-to-Gold Clues 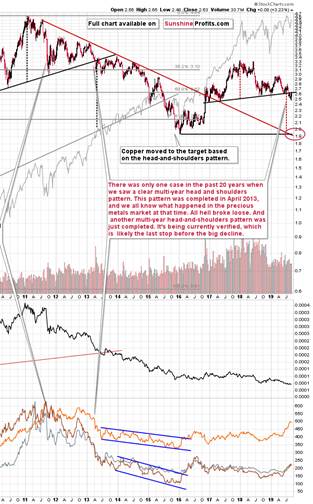 In short, copper’s huge head-and-shoulders formation is no longer “potential” – it’s very real. The H&S pattern was completed and now the price is moving back to the neck level as the final verification. Such “goodbye kisses” are quite common and they are not bullish. They are the final chance to take advantage of the formation and get out of copper and anything that’s likely to fall with it. This includes the precious metals market. The biggest decline in the latter took place right after copper completed its previous huge head-and-shoulders pattern in 2013. 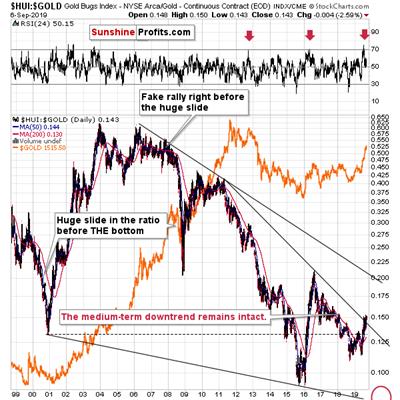 The downtrend in the HUI to gold ratio clearly remains intact. The rally was a few times smaller than the one that we saw in 2016 and it appears to be over. It broke slightly above the declining resistance line based on the 2011 and 2016 tops and then it invalidated this breakout, thus flashing a sell sign.

This happened right after the sell signal from the RSI indicator. Please note that in the past decade, there were only three times when the RSI moved to the 70 level:

The rally appears to be over and lower precious metals values are to be expected.

On a short-term basis, we see that silver is falling down even faster than it had previously rallied, and we see that gold stocks just broke below the rising support line. This means that our Friday’s comments remain up-to-date:

Gold, silver, and mining stocks have all declined profoundly, and it seems to have been a very good decision to enter short positions in silver yesterday, while it was still trading at about $19.35. It’s already more than $1 below this price.

However, as we wrote earlier, that’s most likely nothing compared to what’s to come.

Gold futures closed only a bit below the late-August lows and they are trading close to the mid-August lows so far today, so there was no major breakdown in gold just yet.

The same goes for silver – even though silver futures moved to about $18 in today’s pre-market trading, there was no breakdown below the rising support line that currently provides support at about $17.50.

The HUI Index declined below the late August lows, but didn’t slide below its rising support line so far either. Still, given today’s pre-market slide in gold and silver, it appears that if even if gold and silver don’t decline more today, the HUI will slide further. Gold moved below yesterday’s lows, and silver’s slide is even more profound. This means that the HUI is also likely to move below its yesterday’s lows, perhaps significantly so. This, in turn, means a breakdown below the rising support line that’s based on three previous lows. This breakdown will be an important confirmation of the bearish case in the short run.

The short-term breakdowns are not as important as what happened on the longer timeframes, though.

Mining stocks’ weakness is being confirmed and the breakdown is its clear sign.

Summing up, the big decline in the precious metals sector appears to be finally underway as gold and silver are plunging even without a rallying USD Index. And PMs’ decline started right after the U.S. Labor Day, as we have described. Once the USDX takes off, it will likely serve as fuel to the fire-like decline that’s already underway. The similarity to mid-90s continues to support much lower gold prices in the following months, and the True Seasonal patterns continues to favor lower gold prices in the following weeks. All in all, it seems that what we see right now is the beginning of the final stage of the prolonged decline in the precious metals sector that started in 2011. On a short-term basis, it seems that we might get some temporary strength once gold moves to about $1,330 – perhaps within the next few weeks.

Today's article is a small sample of what our subscribers enjoy on a daily basis. For instance today, we’ve shared with them the up-to-date list of key determinants of the upcoming gold move. Check more of our free articles on our website, including this one – just drop by and have a look. We encourage you to sign up for our daily newsletter, too - it's free and if you don't like it, you can unsubscribe with just 2 clicks. You'll also get 7 days of free access to our premium daily Gold & Silver Trading Alerts to get a taste of all our care. On top, you’ll also get 7 days of instant email notifications the moment a new Signal is posted, bringing our Day Trading Signals at your fingertips.