Gold at support: the upcoming move

Gold and gold stocks declined yesterday, but silver hesitated. Does this, plus the fact that gold is up so far in today’s pre-market trading indicate a short-term bottom? Or is the picture even on the verge of turning bullish?

Not at all. Let’s take a look at the chart below for details.

Yesterday in the PMs 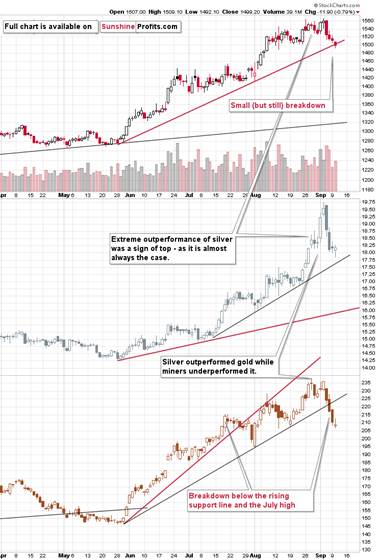 Gold close – and thus broke – below the $1,500 level yesterday. The breakdown was small – less than $1, so the move is definitely not confirmed. At the same time, gold moved to the rising support line but failed to close below it. This support is likely to trigger a rebound and that’s what we’re seeing in today’s trading. So far gold is up by about $7 and we don’t expect the rally to be much bigger than that. Gold’s seasonals don’t point to strength at this time and there are multiple other factors that instead point to the decline’s continuation.

For instance, gold miners just confirmed the breakdown below their rising support line. They also managed to close yesterday’s session below July highs. This is bearish on its own and also through the relationship with gold. Gold miners’ weakness relative to gold tends to herald weakness in the entire precious metals sector.

Does silver’s pause indicate any strength here? No. It declined sharply, so a daily breather is very natural, and it doesn’t imply anything. 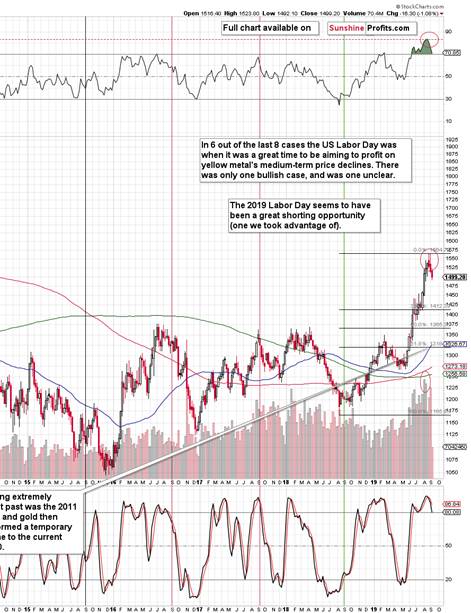 Taking a bigger perspective, we see how gold declined after two big-volume weekly reversals. Gold declined shortly after the U.S. Labor Day – just like we expected it to, and just like it was the case in 2011 and in most years between 2011 and now.

The weekly RSI is still above 70 suggesting that even the very initial part of the decline is not yet over. This is another reason to think that the current bounce in gold is going to be short-lived. 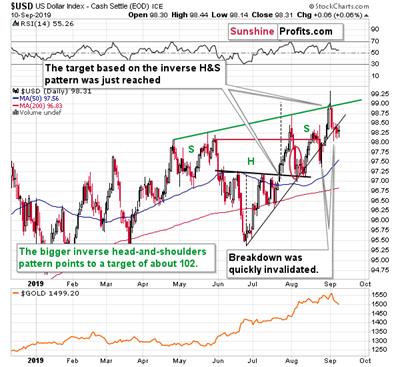 Meanwhile, the USD Index hasn’t done much yesterday, and it was the second daily close below the rising support line. This means that the breakdown below it might be confirmed and USD could decline some more before rallying again.

However, since gold hasn’t moved in tune with the USD Index recently – gold declined on its own – a small move lower in the USDX might not trigger any important upswings in gold. Let’s take a look at our Correlation Matrix for details.

The correlation coefficient between gold and the USD Index for the past 30 days is 0.25 which is close to 0. This means that there has been barely any correlation between the two. In the short run.

Interestingly, in case the very long-term (1500 trading days – about 6 years), the correlation values are negative in case of all parts of the precious metals market – gold, silver, HUI Index, and junior mining stocks (as represented by the TSX Venture Index). These values become more negative on average in case of even more long-term values. What does this imply? That while the short-term moves might be unrelated, gold and the rest of the PM market is very unlikely to ignore a massive long-term move in the currency market.

And you know what? Such a move – up – is just around the corner. In fact, it’s already underway, but it’s not clear for everyone that it is indeed the case. 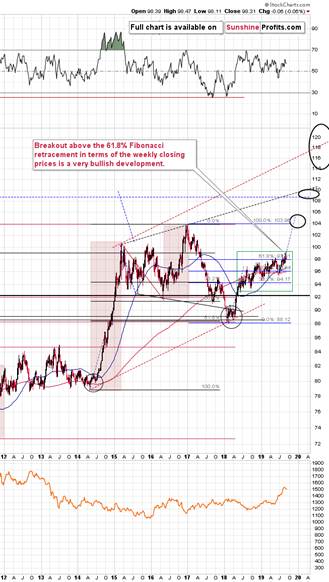 The above chart shows that in general, when the USD Index was moving down (between 2001 and 2011), gold was moving up, and when it moved up (between 2011 and now), gold moved down.

Zooming out allows us to see two more things:

The ellipses mark moments when the USD Index was starting its rally. What happened in gold? Despite its previous strength, it turned around and declined. And it didn’t decline for just a week or month – it continued to decline until its price was severely lower.

Consequently, while a quick move lower in the USD might not change much, the long-term rally that is likely to unfold in the following months is very likely to contribute to much lower gold prices.

Before summarizing, we would like to once again quote the section with links to most important bearish factors that are currently in play:

Key Factors to Keep in Mind

Very important, but not as critical factors:

Moreover, please note that while there may be a recession threat, it doesn’t mean that gold has to rally immediately. Both: recession and gold’s multi-year rally could be many months away – comparing what happened to bond yields in the 90s confirms that.

In particular, it’s worth keeping in mind the enormous potential of the USD Index. It’s after a major breakout in 2014/2015 and three verifications thereof. The 2017-2018 decline which seems huge on its own, was just a verification of a much bigger (and thus more important) pattern.

Summing up, the big decline in the precious metals sector appears to be finally underway as gold and silver are plunging even without a rallying USD Index. And the PMs’ decline started right after the U.S. Labor Day, as we have described. Once the USDX takes off, it will likely serve as fuel to the fire-like decline that’s already underway. The similarity to mid-90s continues to support much lower gold prices in the following months, and the True Seasonal patterns continues to favor lower gold prices in the following weeks. All in all, it seems that what we see right now is the beginning of the final stage of the prolonged decline in the precious metals sector that started in 2011. On a short-term basis, it seems that we might get some temporary strength once gold moves to about $1,330 – perhaps within the next few weeks.