Gold spikes on the Saudi oil attacks: can it last?

On the weekend, there was a drone attack against the world’s largest oil processing facility and a major oilfield in Saudi Arabia. Oil prices have predictably spiked, but how will this geopolitical shock affect the gold market in the days ahead?

On Saturday, the drone bombings struck the Abqaiq oil-processing plant and the Khurais oil field in Saudi Arabia. Both are important facilities operated by Saudi Aramco, the world’s largest oil producer. Nobody was injured, but the strikes triggered large fires, disrupting the global oil supply.

The Houthis, the Iran-backed rebel army that has been fighting a Saudi-led military coalition in Yemen, claimed responsibility for the attack. However, for some people the sophistication of the attacks is the reason to believe that Iran is the one truly responsible.

Is It a Big Deal?

Yes. Although many drone assaults have crippled Saudi Arabia’s oil industry in recent months, the Saturday’s attack were the most damaging. You see, Abqaiq is the world’s largest oil processing facility, where about two-thirds of the total Saudi supply is refined. So, the attack knocked out 5.7 million barrels of daily oil production, or about 5 percent of global production. It implies the biggest oil shock since 1945 (in absolute terms). As you can imagine, this event had significant impact on the oil prices. Indeed, the Crude Oil Brent have jumped from $60 to $68, or more than 13 percent, which was the biggest daily surge since January 14, 1991 during the First Gulf War. Meanwhile, the Crude Oil WTI prices have soared from $55 to $61, or more than 11 percent, as the chart below shows. 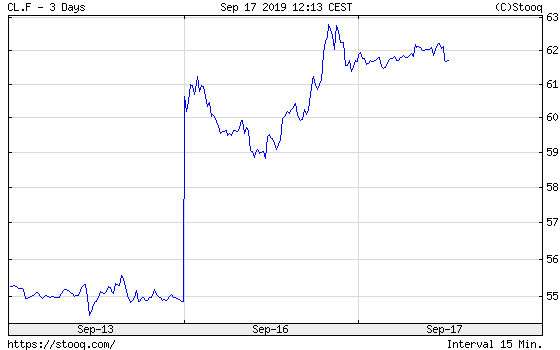 The attacks disrupted the global oil supply and revealed just how much the world’s energy infrastructure is really vulnerable. They also raised concerns about the escalation of tensions in the Persian Gulf. Not surprisingly, we have seen a flight to safe haven assets such as gold. As the consequence, the price of gold jumped over the weekend above $1,500 again.

But what we can expect next for the gold market? Well, the attacks can have a twofold  positive effect for the gold prices. First, the disruptions in the global oil supply could result in the oil shock, which could slow economic growth and raise inflation – just like in the 1970s. However, the impact should be temporary and likely to vanish when the oil supply is restored. Investors should remember that the world is now much better prepared to deal with oil shocks. The spare capacity and reserves are higher and President Trump has already authorized the release of oil from the Strategic Petroleum Reserve, if needed. So we should not see oil and gas shortages as in the 1970s.

Second, the attacks on Saudi Arabia can have important geopolitical implications. President Trump has already announced that the U.S. were “locked and loaded” to hit back after the strikes. Some U.S. politicians flat out called for attacking Iran. If the U.S. engages in another military conflict in the Gulf, the safe-haven demand for gold could rise.

However, investors should remember that geopolitical events very often have merely short-lived effects on the gold prices. For example, the already mentioned First Gulf War failed to make gold rallying. Actually, the presence of the U.S. army in Saudi Arabia significantly reduced risks in the Middle East, which lead – after an initial spike – to the drop in the gold prices, as the campaign turned out to be successful. Similarly, the present tensions do not necessarily have to boost gold prices. Wednesday’s FOMC meeting could have a larger impact on the gold market. Stay tuned!