Am I wrong about uranium?

The contrarian in me loves how hated uranium has become again. Even some longtime uranium bulls are throwing the towel in. I can see why, so it’s prudent to ask if I could be wrong in my outlook.

And of course I could be; I’m a speculator, not a time traveller.

That said, I’ve compared notes with the resource speculators I respect the most, checked other sources, reviewed new data, and my outlook hasn’t changed much.

Readers who’ve been with me for a while will remember that I’ve been cautious about uranium in the near term all along. I never promised that Section 232 would make us all rich—I always framed it as a possible tailwind.

The reason for speculating on uranium is not that it’s a sure thing. It’s that the potential reward is so asymmetrical to the risk, it’s well worth a shot… but only with money I can afford to lose.

Last week, I was invited to discuss this on Real Vision. I prepared slides that I thought made a logical case for the speculation. But Real Vision didn’t want to go through the basics and build up to my conclusion with me; they wanted me to address specific questions. I was happy to do that, and I think it went well, but I do think the case I prepared is worth considering.

Because, as bullish as I am on gold and silver… 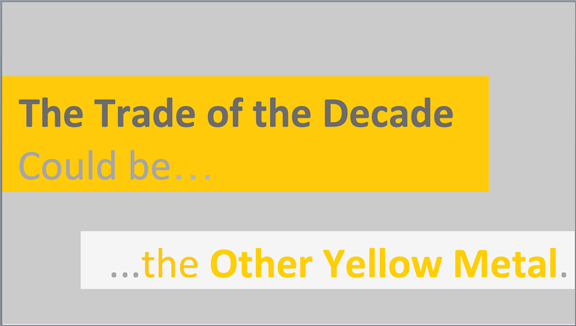 I’m sure you understand the basic idea… 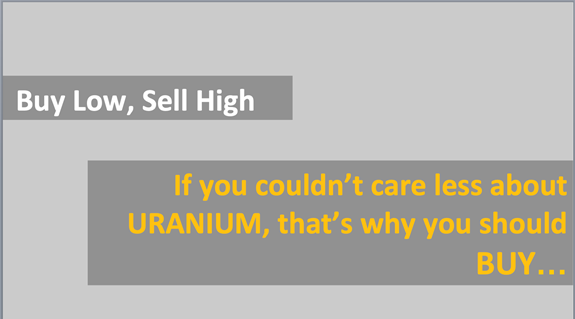 But how do we know this is a contrarian opportunity? What if it’s a sinking ship that will take everyone too dumb to jump off down with it? (Note that smart people can do really dumb things, so cheerleading for uranium by some very smart people doesn’t count for much.)

After all, the long-term chart is still an utter disaster… 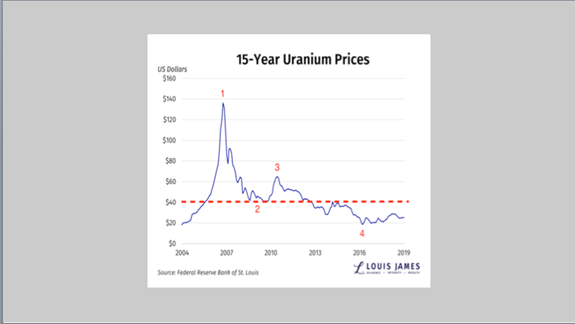 For those unfamiliar with the numbered points in the chart above:

1] This is the peak that followed the end of the deal with Russia to downblend uranium from decommissioned nuclear warheads into reactor fuel. That was clearly a speculative mania, given that uranium is essential, but not rare. The correction that followed makes perfect sense. Though, of course, some bulls at the time were saying prices would go up to $200 per pound or higher. Given that the cost of uranium is a tiny part of the operating cost of a nuclear power plant, that case was persuasive. But savvy speculators took profits as they went, so they didn’t get burned after the peak.

2] After the peak, prices corrected down to about the long-term average cost of production for uranium miners. That was clearly not high enough to ensure supply in the face of growing demand, and prices started recovering sharply again.

3] The Fukushima disaster stopped the nuclear renaissance in its tracks, and uranium prices fell sharply, then fluctuated lower for the next six years.

4] The bottom of the market was—and remains—at around $18 per pound of U3O8 in early 2016. Prices are up a good 40% since then, but as you can see, they still have a long way to go higher before anyone will bother bringing supply online.

And that new supply will be needed… 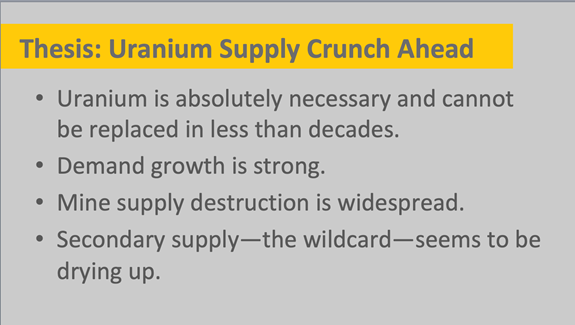 Despite the pauses, delays, and second thoughts, BRIC countries (among others) know they need nuclear power, and they are building that capacity. Contrary to recent rumors, major producers Cameco and Kazatomprom are continuing—and may yet deepen—their production cutbacks. 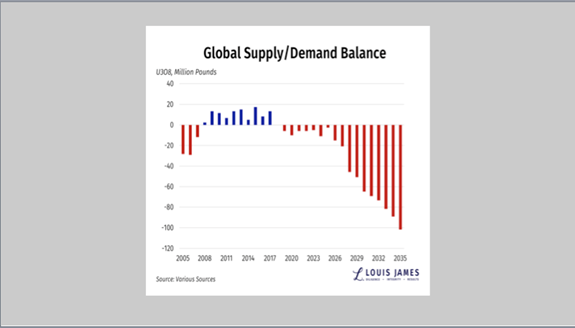 Note that the deficit is not just in the future; it’s happening now.

What about all the plants being shut down? There are indeed more than 100 plants slated for shutdown. But there are more in the works, as you can see in the next chart… 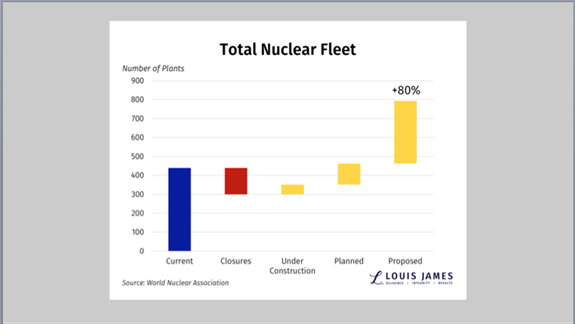 Note that even if none of the proposed plants get built (some surely won’t be, but some surely will), the world’s nuclear fleet is still growing.

This is the main reason I think… 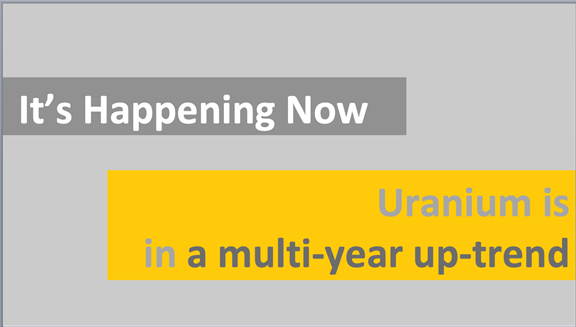 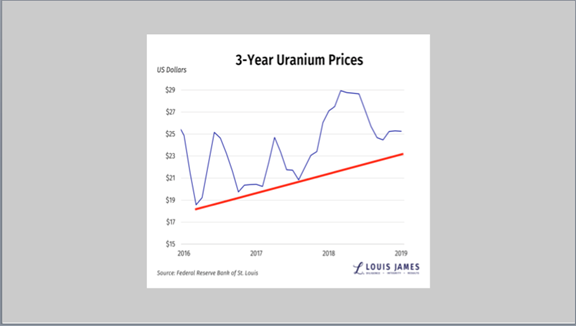 Temporary uncertainty created by the Section 232 petition for US government support for US uranium producers is likely why prices have traded sideways for some months. A large number of buyers are waiting to see if the US government is about to change the rules on them, before they sign any new purchase contracts.

The bigger question, however, is whether the secondary supply that drove prices so far below the cost of mining uranium (mostly from Japanese utilities that sold off some of their massive uranium stocks after the Fukushima accident) has indeed dried up. Recent efforts by some of the producers to buy cheap uranium on the market (in order to sell to customers who committed to longer-term contracts at higher prices) have not found sellers in Japan. That makes sense, since Japan is still officially planning to restart 30 of its nuclear power plants.

There’s also talk about more efficient fuel processing and reprocessing creating new secondary supply that would keep a lid on uranium prices. Little of this is transparent to the market, so I take it with a grain of salt. But even if it’s entirely true, I doubt these sources could flood the market simply by being more efficient.

And demand is not sitting still, either… 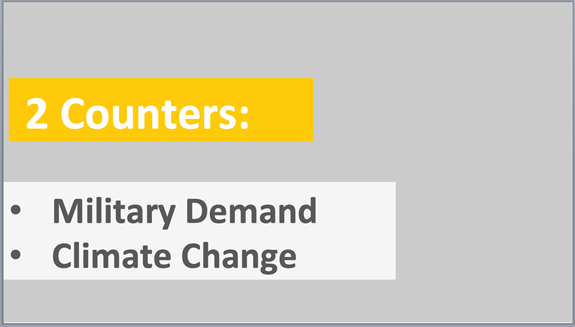 I worry about the renewed arms race with Russia, but no one asked me, and it’s now a fact in our world. Both the US and Russia are developing new weapons. The military won’t disclose its purchases, of course. But even if they happen in the dark, they do constitute new demand that will take some unknown amount of supply off the market. Any estimate I could offer you would be entirely made up, but the number is not zero. That’s bullish for uranium prices.

The much bigger factor—if equally difficult to quantify—is the new push for nuclear power coming from climate-change warriors. I’ve written about this already, so I’ll just add that my tracking of industry news tells me this is a trend gaining strength. The folks who believe that global warming will kill all our children if we don’t drastically reduce carbon emissions within 12 years are getting desperate. Countries keep promising to cut emissions, and then fail to meet those goals. The writing on the wall is clear. Solar fields and windmills are not going to cut the mustard. If the climate warriors are going to save the planet in time—without wiping out the vast majority of its human population—they’re going to need nuclear power. More and more seem to realize this every day.

If I’m right about this, many planned shutdowns won’t happen, and a lot more new plants will get going.

What if I’ wrong? Well, the new plants in the works still more than make up for the ones being shut down. So there’s little downside in me being too optimistic about the global warming folks turning pro-nuclear. But if I’m right… well, it will add huge upside to what’s already a positive scenario. 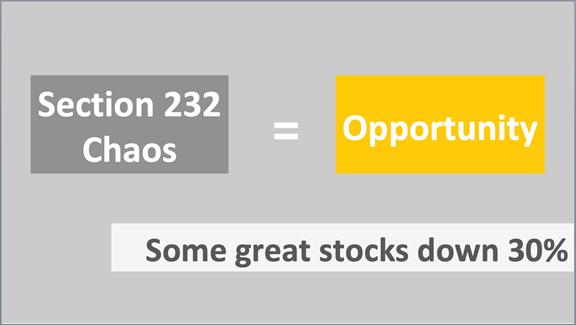 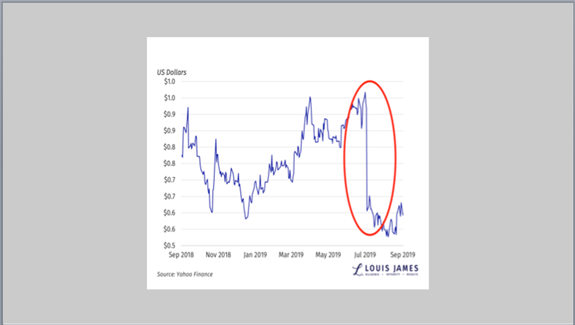 You know my take on this. Trump’s punt to further study the US nuclear industry was not the end of the Section 232 story. The petition is done, but action may still be taken. Recently, the White House floated the idea of an executive order requiring US agencies to buy domestic. Anything like this should provide a major boost to the stocks that fell far lower than the news of delayed action justified. And the actual end of the 232 saga will remove the uncertainty that’s keeping buyers off the market.

And that potential tailwind could arrive within one month… 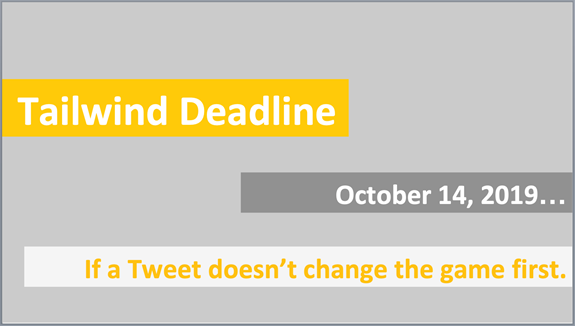 Note: I am not promising that my US uranium picks will leap on October 14 when the president’s working group is supposed to conclude its work. It could happen sooner. Or with Bolton (who was part of the group) fired, it could be delayed. But even if no action is taken to support the US uranium industry, the more fundamental trend I’m talking about remains intact.

Which, again, is not to say that I’m suggesting uranium is a sure bet… 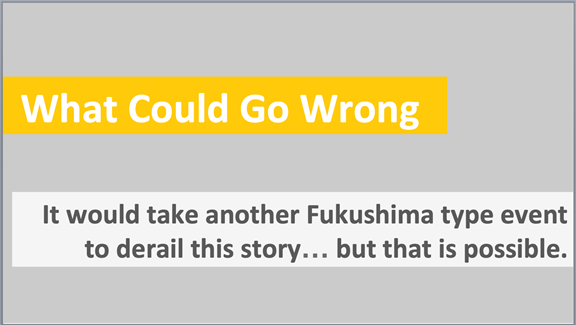 The harsh reality is that even if it were not major and there were no loss of life, another notable nuclear accident would be the end of the trend I’m betting on. I do not think this is likely, and I’m willing to take the chance, but I wouldn’t want anyone to think that I’m ignoring the possibility. 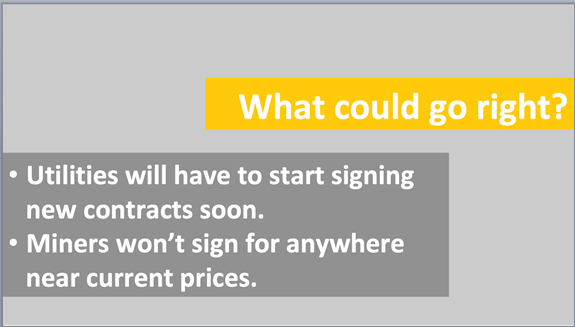 If I’m right, uranium prices won’t just maintain their current upward trend. They will take sudden leaps up, as buyers are forced to sign contracts at prices miners are willing to accept. I’m looking for 50–100% increases over the next year or two—and that’s if the long-term contract prices don’t spark a speculative bubble in the spot price that takes it vertical again, as in 2007.

But I’m not buying uranium to stuff under my mattress, nor even a uranium fund to give me exposure to the commodity price increase. I’ve bought uranium stocks with high leverage to the price of the underlying metal. 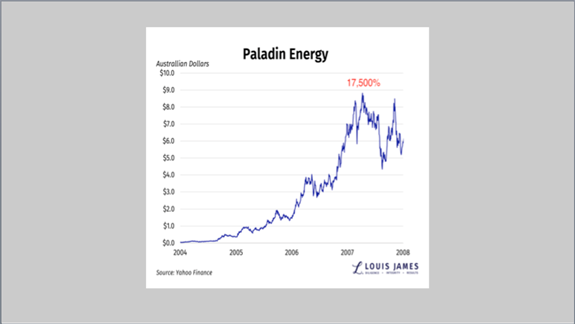 I am not promising that I already have the next 17,000% winner in my portfolio. I’m just saying that the potential is why I’m willing to be in this hated trade. In other words, my uranium picks are my version of swinging for the bleachers.

This is my 100-bagger hunting ground.

To see which specific stocks I’m putting my own money into in this space, please subscribe to The Independent Speculator.

But you have the idea for free. If you go it alone and make a bundle, all I ask is that you remember in the future if my analysis helped you make that money.