Teaser:
The amount of global debt with negative yields soared to $16 trillion, or more than 25 percent of the market. Isn’t this economic madness? We invite you to read our today’s article about the negative interest rates and find out what they imply for the gold market.

The amount of global debt with negative yields soared to $16 trillion, or more than 25 percent of the market. This number has nearly tripled since October 2018. In July, even the 30-year German government bonds went negative for the first time ever, while Nordea Bank, a leading Danish bank, said it will begin offering 20-year fixed-rate mortgages with zero interest, as well as 30-year mortgages at minus 0.5 percent. Isn’t this economic madness? And what does it imply for the gold market?

Normally, instead of spending it themselves, lenders offer the borrowers money, in return receiving the promise of being paid back, and interest. Negative bond yields seem to turn the credit relations upside down. But after closer examination, it turns out that the negative yields do not necessarily deny the laws of economics. The key to understand it is grasping that negative yield to maturity does not mean negative coupon payments. Negative yields imply losses for investors who purchase these bonds and hold them until maturity, not for all bond investors.

More specifically, the negative yields may result from specific government regulations that, for example, require pension funds to invest a certain amount of funds in government bonds, no matter the yield. Investors may also desperately need to purchase a given bond in order to close a certain transaction. And inflation-indexed securities may turn negative when investors fear high inflation, and expect not even these instruments to keep abreast with inflation.

However, the main reason behind negative bond yields is the flight to safety. Investors that have large sums of money and who do not trust the banking system would prefer buying government bonds as a safe place to store their wealth. After all, the odds of Germany defaulting on its debt obligations are quite low.
Another reason is speculation on exchange rates and bond prices. If investors anticipate the appreciation of the given currency, they may accept small negative yields. If one fears, for example, the abrupt depreciation of the Argentinian peso, or the breakup of the euro area, paying a small fee to hold Swiss franc does not seem to be irrational. Similarly, investors can purchase bonds with negative yields if they expect they could sell them at higher prices to other investors. Given that the central banks has been buying enormous amounts of debt since the Great Recession, the strategy of purchasing bonds at prices that seem “foolishly” high and reselling them later to “a greater fool” makes actually perfect sense.

To be clear, in an unhampered market, yields would generally not be negative, as people always prefer present satisfaction over future satisfaction, so borrowers would have to pay interests for the credit. But we do not live in the free market – on the contrary, the central banks’ interventions distorted the market structure of prices and interest rates. The negative interest rates policy hit the banks’ profitability and – combined with asset purchases – created upward pressures on bond prices and downward pressures on the bond yields. The negative yields do not contradict the economic laws, they are rather a consequences of unconventional monetary policies and ultralow policy rates in a world of floating exchange rates and fiat currencies.

See the chart below. Although U.S. bond yields remain in positive territory, they have declined substantially since the 1980. Partially it was caused by the Volcker’s successful fight with high inflation, but the main reason behind record low bond yields is record low federal funds rate and, more generally, the Fed’s asymmetric monetary policy. In the euro area or Japan, the situation is even worse. 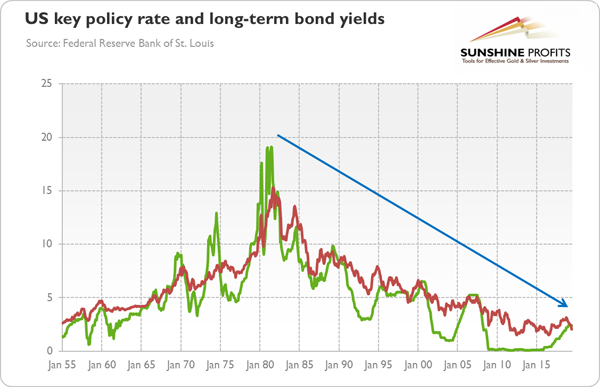 The spread of negative bond yields should be fundamentally positive for gold prices. The subzero yields reflect the flight to safety. Investors scramble for safe havens to park securely their hard-earned money. But gold is the ultimate safe-haven asset. With yields deeper and deeper below zero across longer and longer maturities, buying government bonds will cease to be an economically viable idea. When real interest rates are low and going lower, gold will look more and more attractive.

Some investors will still have to buy government bonds due to government regulations, some will be pushed out on the risk curve in their search for yield, going into more risky assets. But some people will choose gold, especially now that it looks to them to have escaped the sideways trend and its volatility increased.

The yellow metal does not bear any yield, so in normal times, it is often passed over for more lucrative assets. But in the world of negative yields, not bearing any interests is a blessing. Why to park money in Treasuries at negative yields and small odds of default, when one can buy bullion at zero yield and without any counterparty risk? Why to treat Treasuries as an insurance against unfavorable changes in the exchange rates, when gold is a true insurance against the state of the contemporary monetary system?