"FLASH! Durham, NC: According to the Duke University/CFO Global Business Outlook, 67% of the nation's chief financial officers see the U.S. being in a recession by the end of next year."

In spite of things being on the upswing.

Now with all due deference and respect to the noble CFOs across the economic landscape, we have engaged to levels of nauseating detail with many-a-financial sentinel over the decades. And here's our perhaps not-so-stereotypical view of the modern-day CFO: such is their dedication to their over-worked occupation that they don't get out much. Moored within their four-(perhaps padded)-wall world -- barring the occasional resort boondoggle to schmooze with others of their ilk -- their perception of economic issues beyond their bunker oft appears surprisingly limited: "Oh? Where is Gold these days?" Simply our own impression, mind you, of these dear frazzled souls in their ball-and-chain roles. Unaware or otherwise, those 67% seeking recession we 'spect don't check in on our Economic Barometer. Here's why, per the "A Picture's Worth A Thousand Words Dept.":

From its mid-August low to its peak this past week marks the Baro's best up run since the like five-week stint into summer a year ago then following the buoyant fiscal effect of lower taxation across the nation.

And you know the old song: "Lower rates spur housing pace"In a week of Fed Follies discourse -- or perhaps better stated, disconnection -- check out this parade of concurrent incoming metrics: September's National Association of Home Builders Index ticked up to its highest level since October of a year ago; Housing Starts in August were the most since July 2007 along with Building Permits the most since May of that year; and the month's Existing Home Sales were the most since March of last year. As well, August's pace of Industrial Production increased by the most since June of last year, (someone please pass that on to St. Louis FedPrez Jimmy Bullard who sees manufacturing as already in a recession); and "surprise surprise" the Q2 Current Account deficit was actually reduced.

Now to be fair, August's Leading Indicators came in flat: but regular followers of the Econ Baro understand such report ought instead be referred to as "Lagging", for 'tis nearly October. And negatively, S&P/Experian's Consumer Credit Default Indices reached their highest level year-to-date. But on balance, add in this most recent Federal Reserve Bank Fed Funds 0.25% rate cut and Stateside economically we're booming! Please alert your local recession-looming CFO.

Gold meanwhile -- be it from shots between the Oval Office and the Eccles Building across their bows to the Chinese nixing their visits to Nebraska farms and Montana cows -- found its price nicely accelerating into week's end in spite of the down-shift in technical trend. Add in a little arming-up in Arabia along with the New York Fed's injections of bread and we've got the whole Gold Happy Package. Indeed settling out its best up week yesterday (Friday) since that ending 09 August, Gold closed at 1524, just two points shy of its "centerpiece price" of 1526 upon which we herein elaborated a week ago. But as also anticipated, Gold's weekly parabolic trend has now flipped from Long to Short, the first red dot for which we've encircled per the weekly bars here:

Yet we still see any material Gold downside as limited, per our penning a week ago that there's "structural support as found 'round 1454 down toward our "conservative" high at 1434 as met this past 25 Jun."

As for market correlations, we find Gold and the S&P 500 as negatively so. Whilst both markets are higher at present by 1%-to-2% from this time a month ago, their percentage trading tracks are fairly mirrored as we see here:

However for the S&P, the picture (as usual) appears more dear. Beyond its "live" price/earnings ratio being up to a whopping 35.4x (and Bob Shiller's CAPE at 30.0x), the state of the mighty Index's moneyflow moreover is morbid. From the website, here is the difference between the points change in the S&P 500 versus the change in its moneyflow (as regressed into S&P points) as measured from both one month and one quarter ago, the former suggesting the S&P ought be 90 points lower than it presently is, and the latter 140 points lower, (i.e. 'round 2850 rather than 2990):

In fact, let's go 'round the horn for all eight components that comprise the BEGOS Markets (Bond, Euro/Swiss, Gold/Silver/Copper, Oil, S&P 500). Here are their respective daily bars from one month ago-to-date, grey trendlines, and those ever-popular "Baby Blues" which denote the day-to-day consistency of the trend. Note in the upper right panel that Oil has "filled the gap" at least to its high pre-Saudi oil facilities attack; Gold's trend despite its bounce into week's end is decidedly down whilst that for the S&P remains on an up spree; but are Copper's blue dots just starting to roll over? Recession? 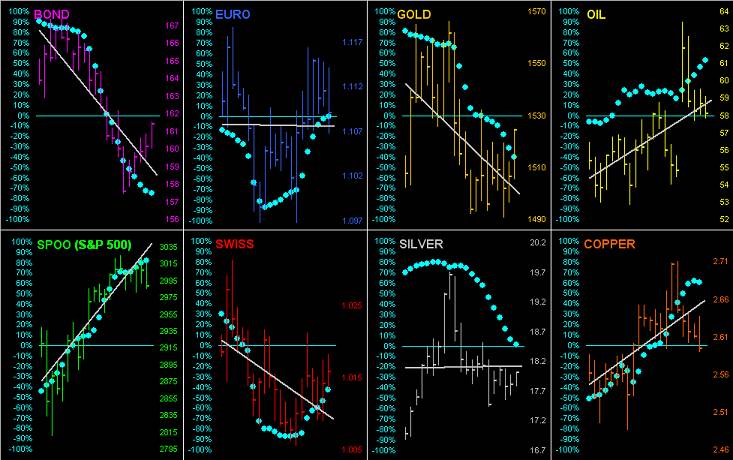 As for the precious metals' 10-day Market Profiles, the picture is prettier than per the prior week. Gold (below left) then was 1496, but today is 1524, the most dominantly-traded price of the last two weeks being 1510. Likewise for Sister Silver, a week back she was at 17.51: she has since ascended in her Profile to 18.06:

Next week brings us the final read on Q2 Gross Domestic Product which ought be at the annualized pace of +2.0%, (note the "plus" sign rather than a recessive "minus" sign). It also brings us the Federal Open Market Committee's favourite gauge of inflation: the Core Personal Consumption Expenditures Index for which the +0.2% monthly pace is expected to be maintained. Life is good, eh?

'Course there'll always be those left in the dark, (well beyond our requisite hard-working CFOs). When it couldn't have been more obvious that the FOMC would vote to cut their Bank's Funds Rate by 0.25%, the children over at Barron's nonetheless were compelled to pen the day before that "The Dow Rose 34 Points Because a Rate Cut Isn’t in the Bag." C'mon kids, get with the program. One is justifiably concerned over such daft reporting from the once-iconic Dow Jones Newswires, their lead story when we peeked in yesterday being "How Balding Became Big Business": that'll get ya set for the trading day, but 'tis never worth over losing one's hair.

Speaking of no-brainers, had you $5,000 to put to work, amongst this past week's choices came an auctioned undergarment ostensibly belonging to one Eva Braun, or the purchase of one Gold contract when price gapped up to begin the week at 1513. Today at 1524, your $5,000 Gold trade is now worth $6,100, i.e. the right choice was nixing the knickers, which ought be left to the Gold Shorts! Right, Squire?