Gold peaks: what does the past tell us about the future?

I’m known for finding ways to profit under current market conditions, not for making a constant flow of wild predictions. But as a speculator, I do have to make projections about future prices. So, in January, I published a report making the case that 2019 would be the year gold would break out.

After the June breakout, I updated my report, saying that it’s not too late to profit from the new bull market in gold and silver. After the August highs I said that after a great start to the year, precious metals were likely to correct, creating great entry points for those just getting on board.

I was right again—and I wrote about putting my money where my keyboard is.

Today, my view is that gold and silver will go much higher over the next few years. All the reasons given in my reports remain valid. Recent economic data, including the major deceleration in China, the EU looking to be tipping into recession, and a slew of recession warning signals hitting the US only reinforces my analysis.

So if I’m right yet again, what would it look like?

Well, I want to be clear that I’m not joining the prediction racket. But just for fun, we can look at what past gold bulls suggest about the potential for the new one we’re in… 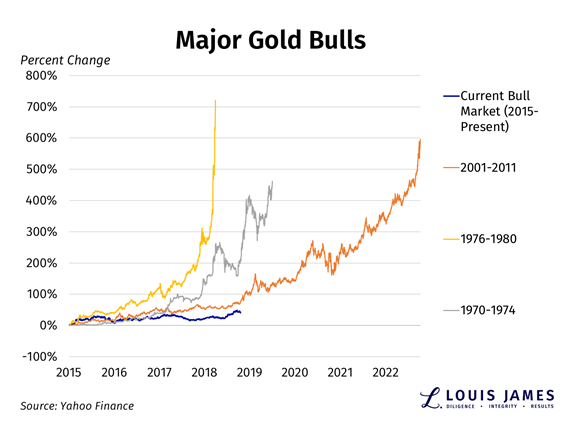 The second one is that the most recent gold bull, from 2001 to 2011, also had a long, slow start. Being the nearest in time, it’s reasonable to see it as the most relevant example. And it started accelerating upward at just about the same point where we are now.

The third is the potential upside. If today’s bull were to resemble any of the past bulls in the chart, the gains would take gold to these new peaks:


A gold bull like the least of the ones above would take gold to $5,898 per ounce. And that’s just the metal itself.

Imagine what gold rocketing up to $8,616 would do to the best, highly leveraged gold stocks?

At this point, the standard newsletter sales pitch would be to cherry pick some of the biggest wins from past bull markets and tell you that you have to subscribe today or miss out on your chance to bag such gains.

“You could make XX,XXX% if you buy now!”

The truth, of course, is that past performance is no guarantee of future results.

Worse, no one can promise to have any of the big 20x, 50x or 100x winners among their stock picks. We can all say that our picks might contain moonshots like that, and that’s true. The word “might” makes almost any claim impossible to falsify.

I’ll just say that I’m confident that my gold and silver stocks—into which I’ve put my own hard-earned cash—have excellent potential to deliver extraordinary gains in the near term.

Heck, maybe you’re a better stock-picker than I am.

My point today is just to illustrate, conceptually—like a “scoping” study on a gold deposit—what this gold bull could deliver for us.

There’s another key takeaway from all this, one you don’t need me or any newsletter writer at all to make use of.

Look at the chart again…

Gold itself could hit it out of the ballpark for you. And silver typically outperforms gold, on a % gain basis.

In other words, we’re at a unique point in time when we can not only buy the metals as a prudent way to protect savings, we can buy them as speculations as well.

Gold and silver could yield gains on the order of a great discovery, with:

Could I be wrong? Of course. I do not claim to know the future.

All I claim is that the rising tide of geopolitical madness and the falling tide of economic activity is very bullish for precious metals. The metals themselves have become relatively low-risk speculations with potentially high yields.

And it’s hard for me to imagine a better speculation than one I’d buy for prudence anyway.

But, personally, I’m at a stage in my life when I’m looking to amass wealth, not just protect existing wealth. That’s why I’m looking to deploy as much of my own cash as I can into the best gold and silver stocks I can identify. Everything I’ve learned in my years in this business tells me that these will multiply the gains I see coming in the metals themselves.

You can join me in that by subscribing to The Independent Speculator, or go it alone.

The basic idea, I’m giving you for free.