High-country greetings once again from beautiful Squaw Valley. This week's missive is brief and -- given Gold is still slanted toward the Shorts -- not necessarily sweet. Our brevity is due to: a) an urgency to travel back across a still substantially powerless Northern California to San Francisco, and b) to restore the damage of a significant "data transmission kerplooey" (technical term) which ultimately drives our analytics, website and to an extent The Gold Update. But with 516 consecutive Saturday editions of this missive on record, there's no way we're gonna miss penning this 517th piece, for in the spirit of that time-honoured motto: "The Show Must Go On!" So let's go!

Recent weeks have highlighted that, in spite of Gold's trading being quite resilient, price nonetheless still is in a corrective stance per the descending red dots of parabolic Short trend as we below see in the graphic of Gold's weekly bars from a year ago-to-date. Note by Gold's settling out the week yesterday (Friday) at 1494, price is now sitting smack on the broader time frame's ascending dashed linear regression trend line, the rightmost bar being what technicians refer to as an "inside" week comprised of both a "lower high", and a "higher low". Again, we remain mindful of structural support that has not (yet?) been tested in the 1454-1434 zone, especially given this Short trend is but four weeks young, the "aggressive" high forecast at 1526 having been met ... and moreover having become a bit of an upside barrier as you can see by its denoted line: 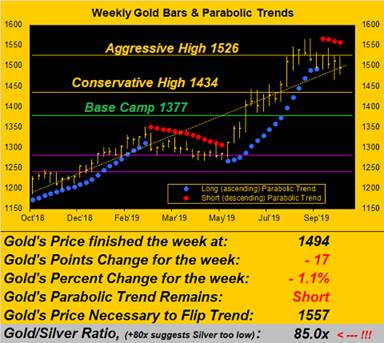 Meanwhile making it somewhat awkward for Gold to find fundamental footing is the past week's release of the Federal Open Market Committee's minutes from their 17-18 September FedFunds rate cut meeting, by which 'twould seem the members are a house divided. And as well they ought be, given the Economic Barometer's having engaged in an up stint from 19 August for a full month through 19 September, only to since have flopped over in full. This past week alone saw benign-to-negative reads across September's inflation measures as well as a decrease in August's Consumer Credit. But then, "Jump back, Loretta!" as The University of Michigan's preliminary read for its October Sentiment Survey was a large leap to 96.0 from the prior month's 93.2 level, noting further that the consensus expectation was for just 89.9.

Thus: "To cut or not to cut: that is the question!" Fitting, that phrase, as we'll learn of the FOMC's next policy decision come the eve (30 October) of All Hallows Eve! Scary? Here's the Baro and the never-say-die S&P, (a little US/China "Phase One" trade agreement adding to the buying spree):

And as goes the S&P, you see, so has Gold been trading oppositely. Here are their near-mirror percentage tracks from one month ago-to-date: 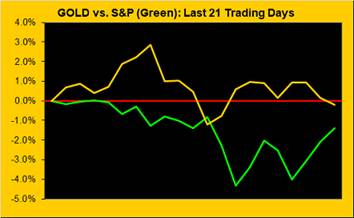 Next let's go to our two-panel graphic of Gold's daily bars from three months ago-to-date on the left and 10-day Market Profile on the right. Recall that from last week Gold's baby blue dots of linear regression trend consistency were a-strugglin' upward to regain their 0% axis, but have since run out of puff in beginning to curl back down. As for the Profile, (which due to the aforementioned "data transmission kerplooey" lacks the usual coloured swath), relative to price at present being 1494, the dominant overhead trading resistance zone runs from 1507 up to 1513, whilst 1489 is the final notable support line: 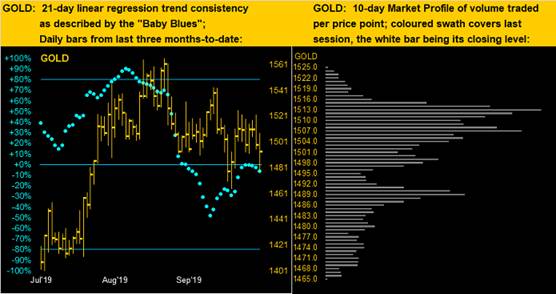 As to the similar layout for Silver, her "Baby Blues" have not keeled over, albeit their being sub-0% means the regression trend itself remains negative. And presently priced at 17.570, Sister Silver is barely sitting above Profile support at 17.550, her overhead trading resistor being 17.800 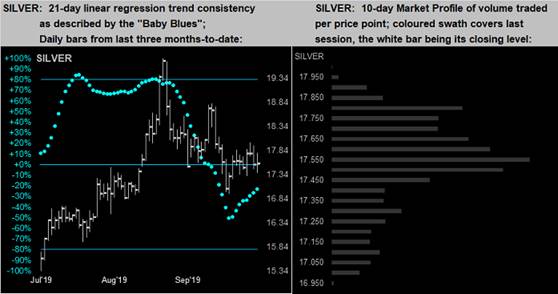 The bottom line is: Gold as told remains in correction mode, albeit on balance 'tis being met with bouts of buying which broadly bodes well. Still, the overall pullback has been nothing to ignore, price having dropped from as high as 1566 on 04 September to as low as 1465 on 01 October, a -6.5% excursion across 20 trading days. Yet more importantly, year-to-date Gold at 1494 is +16.3% ... and should the top of the 1454-1434 support shelf be tagged, price would still be +13.2 for this year. That's a pretty fair friend to have as one's trend.

In thanking you for your forbearance with respect to this week's brief piece, 'tis time to press westward with all due dispatch, indeed across California's Gold Country. Powerless as it may be, Gold is always power, baby!