Another round of global monetary easing has just begun! More than 30 central banks around the world have cut interest rates this year so far. The Fed and the ECB are certainly among them. Should gold investors look forward to these policies playing out? Let’s find out how gold tends to behave during such an extraordinary period!

Ladies and Gentlemen! Another round of global monetary easing has just begun! More than 30 central banks around the world have cut interest rates this year amid trade wars and slowing economic growth and subdued inflation. The Fed cut the federal funds rate twice this year, each time by 25 basis point. In September, the ECB cut its deposit rate from minus 0.4 percent to minus 0.5 percent and reintroduced its quantitative easing, while the People’s Bank of China cut the reserve ratio by 50 basis point to 13 percent for large banks, the third time this year, releasing about $126 billion in liquidity to support the slowing economy. In August, the Reserve Bank of New Zealand surprised investors with 50-basis point interest rate cut. The central banks of Hong Kong, Thailand, Mexico, Turkey and Russia also have cut rates recently, while the Bank of Japan may join the club soon.

The fresh round of global monetary easing ends the short period when major central banks talked of, and some even tried, to normalize the monetary policy after all the unconventional measures undertaken in the aftermath of the Great Recession. The Fed probably advanced the most, but even the U.S. central bank failed to return the interest rates and its balance sheets fully back to pre-recession levels.

The last time when the central banks eased their monetary policies in such a unison was during the financial crisis. Today’s situation is not as grave as in 2008, but the central banks all around the world take the trade tensions and the U.S. yield curve inversion seriously. They worry about the risk of recession and try to prevent it, or to cushion the blow.

What does the global monetary ease mean for the gold market? Generally speaking, the central bankers’ aboutface seems to be very bullish for the yellow metal. The lower policy rates should translate into lower real interest rates, while some bond yields may fall even further into negative territory. Thus, the environment of low interest rates and elevated recessionary risk – otherwise, the central banks would not ease their stance – is fundamentally supportive for the gold prices.

What is particularly encouraging is that the Fed is also easing its monetary policy. It implies that the divergence in monetary policy will not widen, or it may even narrow somewhat – abstracting from the QE, the ECB cut its target rate by 10 basis points, while the Fed by 50 basis points – which is a fundamental reason for a weaker the U.S. dollar, which could remove some downward pressure from the gold market.

Let’s take a look at the chart below, which presents the long-term history of the gold prices and the federal funds rate. As you can see, although the price of gold did not always rise during the Fed’s easing cycles, the last two instances were positive for the shiny metal. 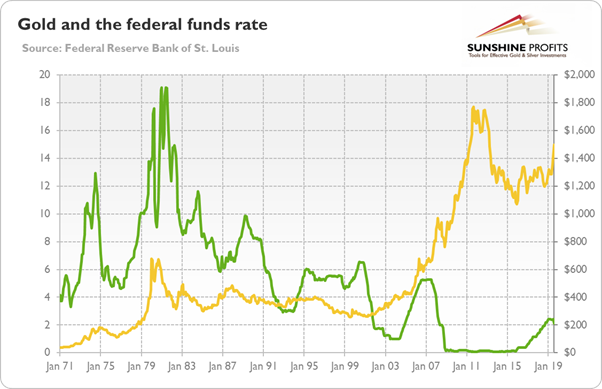 What is crucial here is that the Fed’s easing cycles were accompanied by the narrowing divergence in the long-term interest rates in the United States and the eurozone. The chart below shows the difference between 10-year Treasury yields in both areas and the federal funds rate. As one can see, when the Fed was cutting interest rates, the spread was usually diminishing or even becoming negative. 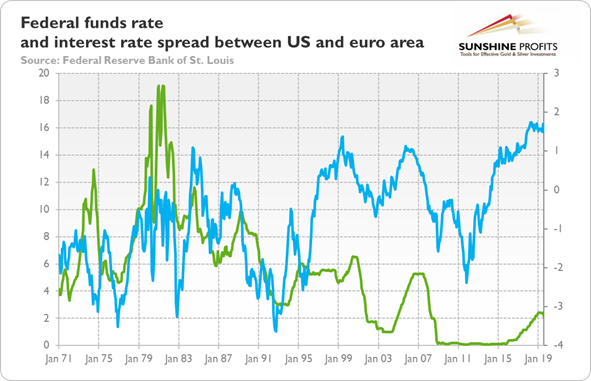 It is a great piece of news for the gold bulls. As the chart above shows, the difference between interest rates in America and in Europe is at record highs. This is what has recently supported the value of the greenback, keeping gold from rallying more intensely. Now, with the Fed’s new easing cycle, the spread may diminish somewhat. It means that there is further room for the gold prices to go up in the medium term if it does indeed translate into lower USD values.

However, the precious metals investors should be aware that the dovish U-turn among the central banks may boost risky assets in the short-term, at the expense of safe-haven assets such as gold. But unless recessionary worries soften, this effect should not be too strong. After all, the central banks ease their monetary policies because they fear recession. In such an environment, luckily for gold, the risk appetite should be limited.