A week ago at this time, Gold's "expected daily trading range" (which for you WestPalmBeachers down there is how many estimated points we 'spect there'll be between Gold's high and low for the next trading day) was 24 points, the "expected weekly trading range" then being 48 points. Cue reality:

'Course fundamentally -- beyond Turkish/Syrian battling (where at the moment they're at "halftime"), StateSide Presidential impeaching, Parliamentary Brexit voting (to again delay), global economic data weakening, and renewed Federal Reserve Bank U.S Treasury Bills buying -- there's really nuthin' goin' on out there. (Please put Gold back in the relics attic next to that pile of Uncle Egbert's indestructible polyester pants).

Spot-on Squire. Gold just again sported both a "lower high" and a "higher low", which for two weeks in-a-row is quite rare, this being just the fifth such consecutive occurrence since the turn-of-the-century. And save for such first docile occurrence back in 2001, each subsequent set of back-to-back inside weeks has acted as a coiled spring in then shooting Gold to materially higher levels.

As to Gold's present case, let's update our graphic of its closing prices by the "100-Handle" groupings since settling at the highest ever --1900-- back on 22 August 2011. And therein, "The Gap" remains obvious with 1600 waiting in the wings per the albeit arguable trader's theorem that "all gaps get filled". Brings to mind for you blues rockers out there the super-charged John Mayall piece from '69: "Room to Move": 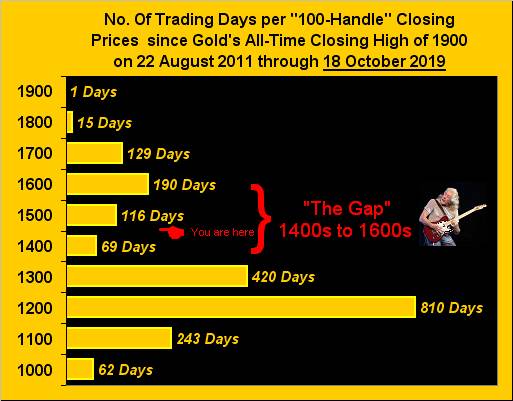 However more to the present, Gold remains in its corrective parabolic Short trend, now five weeks in length, price therein having traded as low as 1465 (01 October), but not so deep as to test the 1454-1434 support shelf. Yet as narrow as was this past week's trading range, pressing deeply down on a coiled spring only becomes exponentially more difficult, (barring the spring itself suffering catastrophic structural failure):

"Failure" indeed seems more apropos of the recent track for our Economic Barometer, such stance ought being Gold favourable. Further, look below at the graphical expanse between the level of the S&P 500 (red line) which historically has always moved to the level of the Baro (blue line). And 'twasn't the prettiest week for incoming metrics: October's Philly Fed Index halved itself from 12.0 to 5.6; and September posted negative slips for Industrial Production of -0.4%, Retail Sales of -0.3%, and Leading Indicators of -0.1%. Yes, various near-term technical trends for Gold also show as negative, but 'tis its buoyancy therein that counts, luv:

Indeed to trends we go, these next two of course from the website's Market Trends page. Here we've the daily bars across the last three months-to-date for Gold on the left and Silver on the right. To be sure, in both panels the baby blue dots of linear regression trend consistency are pointing to further price fallout. But given all of the aforementioned fundamental and economic Gold positives presently afoot, the rightmost price bars of both the yellow and white metals at worst look not so much negative as do they namby-pamby, (or even coily-springy):

Thus it follows next within the 10-day Market Profiles for Gold (below left) and Silver (below right) that we find their respective present prices centered, or nearly so:

And certainly centered in the broad case of The Stack is "Gold Currently" at 1493:

Gold's Value per Dollar Debasement, (from our opening "Scoreboard"): 2972 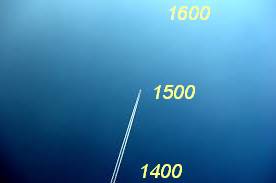