A bank deposit comes with a risk. But instead of compensating you for the risk, the bank pays you nothing. So it’s a return-free risk. And worse than that, a negative rate means that you are paying the bank in order to take the risk of lending to them.

Lewis Caroll wrote some pretty crazy stories, but even he did not think of something so absurd as this. A vorpal blade that went snicker-snack on the Jabberwock is nothing, compared to a bank that goes snicker-snack on your deposits! Hmm, maybe there is a good analogy here.

A fantasy role-playing game called Dungeons & Dragons has a magic sword called a vorpal sword that is extra likely to cut off your opponent’s head. And a fantasy economics called Keynes & Monestars has a planner called a central bank that is likely to cut off civilization’s head. But we digress.

Someone might retort “well, don’t put your money in a bank! Put it in the stock market.”

Money in the Stock Market

Of course, a bank depositor does not have money (or irredeemable currency, as today) in a bank. He has lent it to the bank. We believe that it’s important to understand these things at a mechanical level.

More to the point, a stockholder does not have money in the stock market. He paid his money to the prior owner of the stock. That person got the money, and may well have spent it. Perhaps on a Vegas binge. Maybe the bartender who unbottled the booze on his bender bought shares…

But as far as the new stockholder is concerned, his money is long gone. He traded it for stock. Why did he do that? Because he expects that someone else will pay him even more money in the future. Why would someone pay him more? Because that guy expects the next guy to pay even more than that. And so on.

As an aside, this would be all good if the shares went up because the company’s earnings went up. In that case, investors should be happy to pay double—because they’re getting double the earnings. Because they would be getting twice the dividend (or more). However, this does not describe our world. We live in a world of falling interest rates.

As interest the rate falls, people pay more for the same dollar of earnings.

Consider a simple case. Suppose Prudence Inverness bought a share of the Dollar Corporation. She paid $10 for it. TDC earns—you guessed it—one dollar per share. This means the earnings yield on her investment is 10%. The CEO, Dave Dahle, sets the dividend at $0.20, so her dividend yield is 2%.

A year passes and TDC earns—still—one dollar per share. Is Prudence any richer?

Next, Spencer Speccalatore else comes along. He bids $20 on the same share in TDC, with the $1 of earnings and $0.20 of dividend. Now is Prudence any richer now?

If she takes Spencer’s $20, then obviously she is $10 richer. However, Spencer is not. Assuming her purchase of the TDC share for $10 was fair value, then Spencer becomes poorer by paying double for the same share that earns the same dollar.

Obviously, there comes a point at which no further buyer is willing to pay more. Then the price crashes. That is when most people would say that the wealth was lost. This article in the Atlantic captures this idea:

Conversion of Wealth to Income

We’ve written many times before, that the wealth of the Spencers, Willies, and Marks is converted into the income of the Prudences, the Spencers, and Willies (yes, some of those who converted their wealth into someone else’s income, later receive yet another person’s wealth as their own income).

When wealth is converted to income, much of that income is spent. That is the moment when it is wiped out. The price collapse occurs later. That’s just the accounting catching up to the reality.

This was a bit of a digression, but important enough to be worth the words necessary to describe this process. However, our main focus today is at a different angle.

Where, in this process of bidding up the same share of TDC with the same dollar of earnings and the same twenty cents of dividend, is wealth being accumulated? We mean this from an economy-wide perspective, not merely looking at Prudence, Mark and Willing. They are the lucky ones who bought lower and sold higher. And, in the end, their cumulative gains were matched by the loss of one Mr. Wild.

All during the process of bidding up the shares, wealth is not being accumulated. It is being dissipated. Each selling shareholder has a gain, and spends some of that gain (even if he would not, the tax man takes some of it).

We write a lot about the need for interest. This is not merely some lament for the poor wage-earner, who many presume to be too dumb and too unsophisticated to invest properly (i.e. buy shares of TDC at ever-higher prices), and who is therefore relegated to the sad fate of depositing his savings in a bank. Although of course there are many people who don’t buy shares. And they do deserve some sympathy because they are being given a raw deal.

Our point is much broader than this one group. Those who are smart and sophisticated enough to buy shares of TDC, think to use shares as a surrogate for savings. Rising share price is a substitute for interest. And—unless they are Mark Madenes—it may seem to work for them.

However, there is a key difference. Savings is used to finance an increase of production, a profitable business. The interest is paid out of that increase. Rising share price finances nothing of course, and the capital gain of each selling shareholder comes from the next buyer’s capital.

No wealth is accumulated in this process of bidding up asset prices. In fact, it is being de-cumulated.

The Fed and other central banks have waged a War on Interest. They are now victorious. It’s all over, but the mopping up. Positive interest is not coming back to the franc; zero interest will come to the dollar soon enough.

This is why Monetary Metals is obsessed with paying interest on gold.

The prices of the metals barely budged this week.

It is interesting to note that this week, more than one central banker felt it necessary to say something about a possible next crisis. And at least one of them said something about gold. We do not place much stock in what these guys say for obvious reasons. Like Elmer Fudd armed with a gun that couldn’t quite hit any target, the central bankers are armed with a theory that couldn’t quite explain an economy.

However, there are certain things they can see—sometimes ahead of most others. One is the stress on the banks. The Swiss Bankers Association says that negative rates are costing them $2 billion a year. Two billion here, two billion there, and pretty soon it adds up.

The banks want an end to negative rates, but as we have written at great length, this is impossible. So right now, they are facing a drain of their capital of two billion a year. The banks are trying to catch up by charging their clients even negativer rates. This could cause a run on the banks, if depositors withdraw paper bank notes (which have an interest rate of zero). Just like in our discussion of the repo market intervention, each policy imposed by the central banks has consequences that make them impose the next policy. We said:

“An image that comes to mind is a mad ocean monster, like a kraken. It is blasting a sea dike with many high-pressure hoses. This causes leaks, but the kraken keeps plugging them with more and more tentacles.”

We eagerly await (not really, just a figture of speech) the next policy response of the Swiss National Bank, and the other central banks. Especially if these rumblings of the next crisis are real. As students of the gold basis, we expect to see an early warning.

Read on for a look at that early warning system. But, first, here is the chart of the prices of gold and silver. 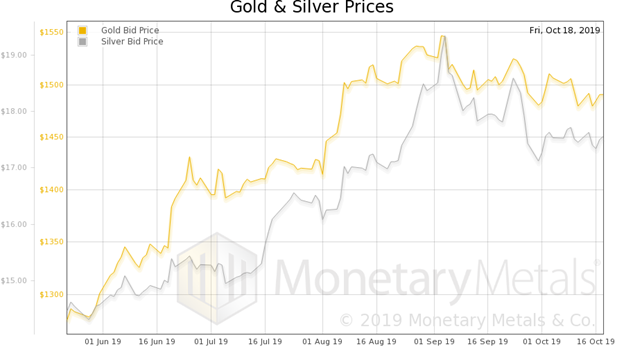 Next, this is a graph of the gold price measured in silver, otherwise known as the gold to silver ratio. 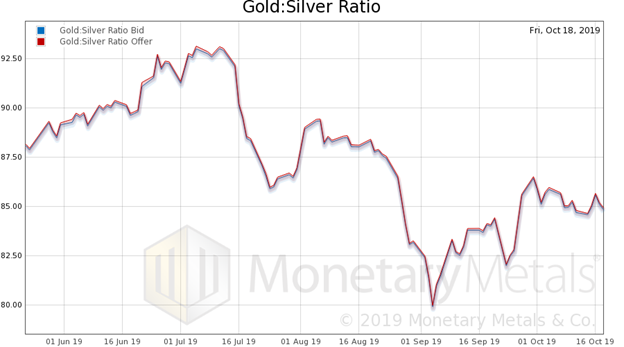 The cobasis increased again, with no drop in price. Gold is just that smidge scarcer that it was. Though we must emphasize this is far from the level we would expect in a crisis.

The Monetary Metals Gold Fundamental Price, was up another $19 this week, to $1,483. 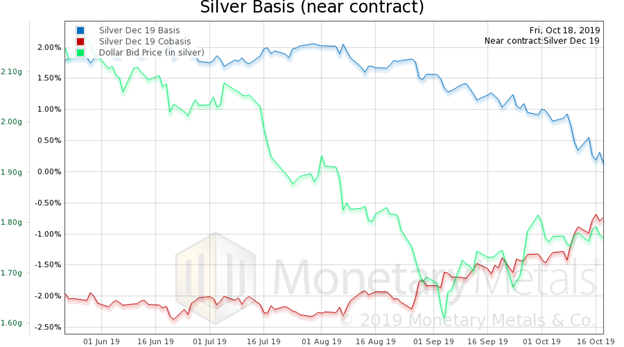 In silver, the same thing happened to the (December) cobasis, though not the silver basis continuous.