This is the Rolls-Royce of the precious metals business

Rolls-Royce is often ranked as one of the most reputable brands in the world – and for good reason.

Its machines are reliable. And its brand is synonymous with luxury and the finest craftsmanship across the auto, marine and airplane sectors.

In today’s world it’s all about maximizing efficiency to generate the most profit.

This is known all too well in the resource sector.

Hard times have crippled the industry. All the way from the Newmont’s and Barrick’s of the world down to the tiny junior exploration companies, it’s been tough sledding.

From a returns perspective, the royalty business has – hands down – been the best place to invest over the last few years.

You Could Call it the Rolls-Royce of the Resource Sector.

In fact, few investors know that the royalty business is one of the best ways to make a fortune.

Take the entertainment industry, for example.

Songwriting brothers George and Ira Gershwin wrote an entire catalog of hits between 1920 and 1937.

Today, their heirs make around $8 million per year in royalties from songs written nearly a hundred years ago.

This company doesn’t explore, mine, or produce a single ounce of gold. Instead, it collects royalties on 42 different mining projects around the world.

If you were an early shareholder in Royal Gold, you’d be sitting on extraordinary long-term gains.

But here’s the thing…

You’d have to be related to someone in show business, like the Gershwins… or have the good fortune to have bought Royal Gold back in 1986, to make anywhere near that kind of money.

But even narrowing your timeframe shows that owning royalty and streaming companies is good for your portfolio.

Below is a chart which shows the Katusa Royalty Index versus the major gold producers and mid-tier producers for the past 5 years. You’ll see it’s no contest. 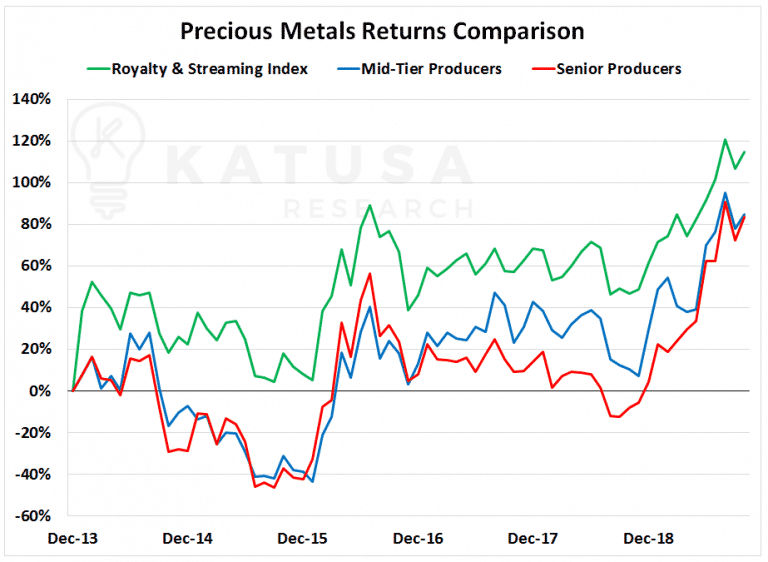 It’s actually incredible how much cash these businesses earn. You’ll have to look no further than my friend, the billionaire wine connoisseur Pierre Lassonde’s company Franco Nevada as a stalwart in the space. So let’s use the largest company in the royalty sector as a case study.

Below is a chart which shows Franco Nevada’s Net Income earned per employee. I’ve compared it to notable household names like Goldman Sachs, Facebook, Apple and Chevron. What you’re about to see will likely blow your mind… 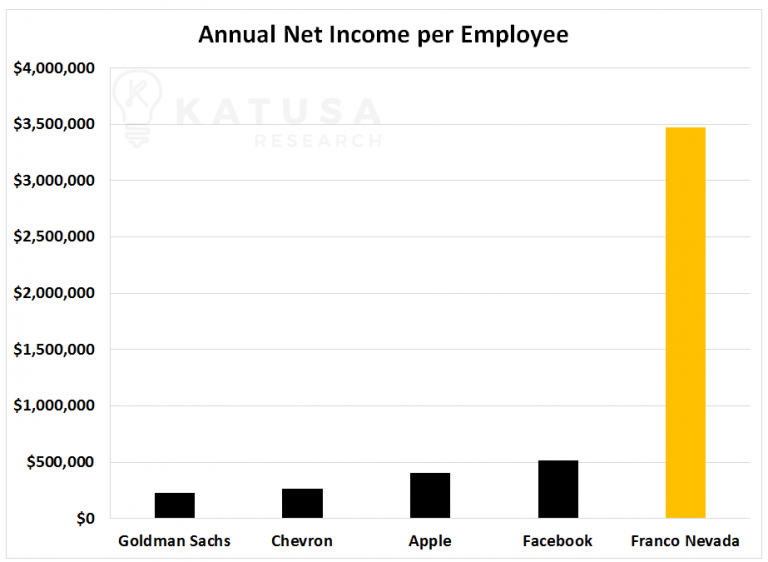 It’s astounding that on a profit per employee basis, the royalty/streaming business model absolutely crushes it.

So how does the model work?

Understanding the Business – What’s the Difference Between a Royalty and Streaming Company?

At its core, royalty and streaming companies exchange their financial capital for a right to a percentage of revenue or production of an asset. The difference is:

Here is a basic example of a royalty structure…

Casey Mining Corp wants to build a gold mine in Argentina. But it doesn’t have enough money to build it.

Let’s say the construction cost is $100 million but the bank will only give them $75 million. So, they’re $25 million short.

Fortunately, around the corner from Casey Mining Corp’s office is Katusa Royalty Corp.

Katusa Royalty Corp will give Casey Mining the $25 million it needs.

But obviously Katusa and his shareholders require a significant return on their investment.

Katusa Royalty Corp believes in the project, so it’s willing to take 10% of the revenue generated from the mine for 10 years, in exchange for the $25 million.

It’s a win-win scenario. Casey Mining Corp gets to build its gold mine. Meanwhile, Katusa Royalty Corp earns a de-risked return on investment.

This type of structure would be called a royalty.

Here’s an example of streaming structure…

If Casey Mining gave up 10% of its future gold production at a predetermined gold price, in exchange for the $25 million from Katusa, the deal would be called a stream.

Today, mining companies that are looking to finance part of their operation with a stream or royalty deal have a plethora of choices.

While some would tell you otherwise, in reality only a select few companies have access to world class opportunities. It just comes down to cost of capital. Larger companies in the space like Franco Nevada and Wheaton Precious Metals have a lower cost of capital than their competitors. It gives them the upper hand in the bidding war. They can offer better investment terms because their cost of capital is lower than their peers.

It’s why you see smaller companies offering royalties and streams on third and fourth tier mines, or mines in dicey jurisdictions that aren’t even producing yet.

Royalties and Streams Are Best Made in Hated Markets

In certain sectors outside of gold, silver and copper, competition for the best royalties and streams is far less fierce.

There’s one corner of the resource sector where there’s NO competition. It’s like showing up for a 100-meter sprint, and everyone else is out of shape and running in flip-flops.

It’s an incredible opportunity for the right company to be a first mover in the space.

According to S&P Global Market Intelligence, there is one sector where only 35% of projects considered to be in the Advanced or Development stage are currently subject to royalties.

On the other hand – in the gold sector – roughly 50% of producing and development stage gold projects have some sort of royalty or stream on it.

After a little due diligence, you’ll see many of those royalties in this niche sector are very small, immaterial deals structured by past project owners.

This one particular sector is virtually untouched by modern, cashed up royalty companies.

It offers incredible upside and this one company offered terms in a deal that I just couldn’t resist.

It’ll be a multi-million dollar investment for me.

And subscribers have been overloading the company’s phone systems to stake their piece alongside me and other big investors.

Don’t miss out on the next opportunity to get in on one of the hottest deals to hit the resource markets in a decade – sign up to become a member of Katusa’s Resource Opportunities at an incredible price, while the limited membership spots remain.