Behold the gift of gold

"Where do you see Gold finishing the year?" Directed at yours truly came that question from across the square table at last Sunday's Investors Roundtable, the price of Gold then at 1517. The instinctive response with nary a thought (which is said to be the hallmark of a good trader and by our experience works some 50% of the time) was "Probably right about in here."

Not to have taken the wind out of the sails (let alone wiped drool off the lips) from those wanting to have instead heard the bandied-about figure of "1600", but 'tis what 'tis. We then lightly elaborated upon that which you valued readers have already come to know these many weeks: that subsequent to Gold having achieved our "aggressive" forecast high for this year of 1526 back on 12 August, (from which there were two swiftly-failed follow-throughs to the mid-1500s), price has been fairly range-bound, indeed congested throughout, within the high-1400s to low-1500s. You can see that by price's track in the above Gold Scoreboard ... until this week's lurch lower.

'Course with seven full trading weeks still remaining in 2019, the return toward our so-called "centerpiece price" of 1526 not only is viable but we think likely. In fact, this lurch lower -- which found Gold settling out the week yesterday (Friday) at 1460 -- one might regard as anticipated, healthy, and finally as having happened.

You know where we're going with this but 'tis worth the repeat. And to put it in visual context, let's go straightaway with Gold's weekly bars from one year ago-to-date:

The now eight-week run of parabolic Short trend per the rightmost red dots kicked into lower gear back on 20 September. Since such date, you've herein regularly read of the 1454-1434 pricing area referred to as a support shelf -- its lavender rectangle added to the above graphic -- which Gold could well test during this parabolic Short trend. Recall, too, that 1434 had initially been our "conservative" forecast high for this year (achieved pre-dawn on 25 June whilst we were wifi'ing in Terminal 2 at Aeroport Nice Côte d'Azur) from which price then floundered about for better than a month toward creating a resistance area before breaking out higher to 1526 . And you know the old tried-and-true traders' saying: resistance becomes support which is how we now view the 1454-1434 zone, Gold this past week coming within a whisker of testing it by trading down yesterday to as low as 1457.

Will the 1454-1434 support shelf stick? We ought think so. As of a week ago, Gold had been putting in its best year (+18%) since 2010 (+29%), but with this lurch lower is now tied with 2017's full-year performance 'round +14%. Still, there's no fundamental nor technical rationale to throw the baby out with the bathwater: markets ebb as well as flow. And per last week's missive, we're now working through Gold's "No-Go" from which we 'spect we'll move toward year's-end with "Go-Go" back up into the 1500s. But should 1434 materially fail, please have Santa present us with a dunce cap for Christmas. And better as a gift to yourself, this support shelf -- as we always caution given prudent cash management -- appears as a nice price area to buy Gold.

One might even dub Gold's having pulled in its reigns of late as "the pause that refreshes". For in next looking to our graphic of Gold's daily closes since the highest ever at 1900 back in 2011, price upon embarking from our old nemesis "The Box" (1240-1280) this past June pretty much has gone straight up the lift shaft to now dawdle about, (just below the 1541 blue line from which the weekly parabolic trend would flip from Short to Long were that price remotely to be reached in the new week). But in looking at Gold per this broader context, 'tis been one heckova great run of late. Moreover, as that horizontal blue line mathematically moves lower week-by-week, such parabolic flip back to Long is certainly in play before the year is out, (barring the baby with the bathwater being thrown out): 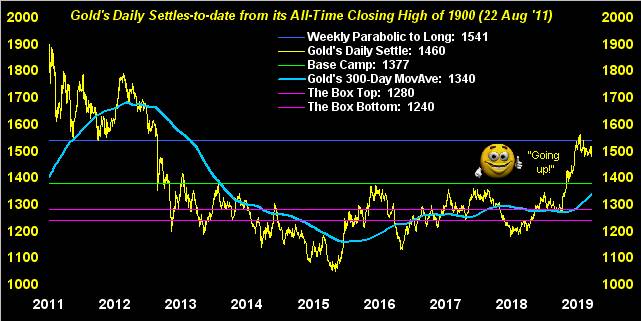 'Course, 'tis all about riding the complacency wave of stocks. After all, they only go up, the S&P 500 hitting all-time highs in six of the past ten trading days. Even though the Federal Open Market Committee members are shying away from further rate allay. Even though with most constituents having reported their Q3 earnings, only 62% have beaten the like quarter of a year ago. Even though the mighty Index's "live" price/earnings ratio as honestly calculated is 33.5x. Even though the Economic Barometer -- which did have a better week -- nonetheless broadly has been working lower. Here's the Baro (blue line) year-over-year with the S&P (red line) wandering -- no, "rocketing" -- into deep space:

Yes, there were a few shining bulbs from the week just past: The Institute for Supply Management's October Services reading ticked higher for just the fourth month of this year's ten; and the Trade Deficit was reduced in September as were Wholesale Inventories; all good, that. BUT: Mr. Stagflation reared his ugly head in Q3 as Unit Labor Costs rose +3.6% -- the most since Q2 for 2016 -- and Productivity fell -0.3%, the largest drop since that same Q2 back in 2016. And following those like 2016 reports, the S&P then slumped -5% that year from August through October. Just sayin'...

Still in the midst of this, Richmond FedPrez Thomas "Up the Wrong Tree" Barkin in addressing the iconic GBCECO (don't ask) this past Tuesday noted that whilst "we could talk ourselves into a recession", he doesn't think one is imminent and further "There’s no evidence that we’re faltering." Please fax to him the above chart of the Econ Baro. And whirling 'round the world, we have from the "What Else Is New Dept." economic cautioning for Europe from the International Monetary Fund, whilst in China the effects of tariffs seemingly are taking some toll.

All of the foregoing ought in turn being working positively for Gold -- which 'tis not -- for here's what we've got in viewing the percentage change tracks of the yellow metal vs. the S&P 500 from one month ago-to-date: 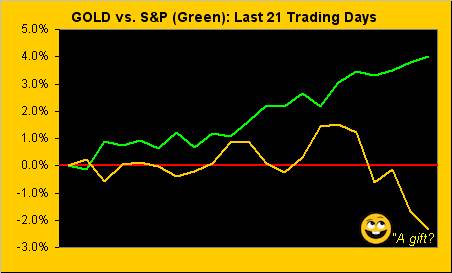 As to the whole congested precious metals mess, here next we've the daily bars from three months ago-to-date for Gold on the left and Silver on the right. In last week's missive we warned of the lack of linear regression trend consistency exhibited by their "Baby Blues", and sure enough, both metals threw in the towel as this week then unfolded:

And in throwing in the towel, within their respective 10-day Market Profiles we find both markets having run afoul, present price essentially buried at the bottom for both Gold (left) and Silver (right):

So: be they at bottoms, the precious metals? We're looking for Gold's 1454-1434 support shelf to contain price and moreover re-launch it. But clearly the coiling spring of which we wrote just three weeks back instead suffered metal fatigue and cracked.

Yet the past week wasn't entirely bad, and if you're partial to Gold, the finer things in life may, too, appeal: Ferrari (with the perfect ticker symbol RACE) sported Q3 per share earnings of 90¢ that beat the prior year's Q3 of 77¢. But we really would dissuade you from combining the yellow metal with the car...

"That's the one I did the three laps in at Monza last summer, mmb..."

"We got champagne afterwards!"

To be honest, Squire, it looks terribly pushy. Rather, folks, consider the gift of Gold itself today: for in the future 'twill generously pay!