Keep it in context

Investors want the bull market to keep going. Fair enough – who wouldn’t want easy returns to keep flowing? But the desire for more bull means everything is viewed only through that lens: is a development good or bad for stocks?

Such a simplistic approach sidesteps context and in doing so often distorts facts. Celebrating rate cuts is a good example: rates get cut when the economy needs help, so rate cuts should mean investors get cautious…but as investors look to sustain a stock market that has thrived on low rates, news of rate cuts sends stocks up.

Reactions to this Phase One trade deal are also a good example. Of course thawing the trade war freeze would be good, but the terms on the table barely scratch the surface of the argument. This argument is actually about free market capitalism versus state-supported enterprise, about protection of intellectual property versus state-sanctioned theft, and about swallowing some extra costs to support more US manufacturing.

The Phase One trade deal doesn’t touch any of that, but that doesn’t matter to the markets. When looking through a binary lens, the only options are Good or Bad. Since any deal is better than no deal, progress towards a Phase One deal goes into the Good column and the market is free to celebrate.

That’s what happened last week. First reports broke that the US would roll back tariffs on $111 billion in Chinese goods and market rejoiced. Then the party went on pause when China asked for more, for 2 a rollback of tariffs on $360 billion of goods. With fresh evidence of discord at the table, stocks stuttered…but then Trump tweeted something supportive of a deal and markets took off again.

It helps that stocks are trading at all-time highs. The markets have been gaining with enough consistency and gusto that investors are feeling reasonably gutsy.

Against all that, gold has lost some serious ground. The yellow metal is trading at $1461 as I write this, down from $1515 at the start of the week.

Trump and Xi are both pretty motivated to make a deal, but neither are motivated to give ground on the big issues. China needs a deal to ensure food stays on its tables; it particularly needs pork, as it has lost a third of its pork to Asian Swine Flu, and it always needs soybeans. Trump needs a deal because making deals is his thing.

But Trump entered into this trade war to protect US businesses that were losing ground to Chinese groups that benefit from state support and disregard for intellectual property rights. If Trump rolls back all the tariffs, he gives up all his leverage and stands no chance of getting what he really wants. More generally, for each side to roll back tariffs at this point would just take the partners back where they were when this all began!

So I don’t actually think a big deal is likely, no matter how much the market wants one. The good-orbad market will applaud any deal but the gains gotten off a small deal are likely to be limited in duration as remaining tariffs and barriers continue to impact and as realization dawns that the war is in fact still on.

Bigger picture, it would take a big deal to stem the slide in global growth. The trade war, Brexit, and simple cyclical timing have sent growth into a tailspin, one that isn’t going to right itself without essentially a miracle.

Central banks have been trying to create that miracle through lower interest rates. China’s central bank was the most recent to join the party when it cut rates a week ago, for the first time since 2016. But it hasn’t been enough to turn the tide. Instead, lower rates have just created strong support for gold because lower rates, and especially negative real rates, support gold.

With most major economies now in the negative real rates camp, gold’s engines are primed. But instead of focusing on where gold might be going, I want to spend a moment on where gold is right now.

Getting 13% more per oz. sold doesn’t sound that significant, but it is. It’s especially significant because gold miners put so much effort into reducing costs and shoring up balance sheets in the bear market and they haven’t yet started to spend much on new projects. As a result, rising gold prices are going straight to the bottom line.

As I scanned through Q3 results in recent days, one capture of that increased profitability jumped out at me: dividends. A list of major and mid-tier miners either re-started or increased their dividends.

· Agnico Eagle boosted its dividend by 40%

This is by no means an exhaustive list – in fact, these are just the dividend increases I came across in my inbox. I’m sure there are others.

Dividends matter. Generalist investors like yield. They rotate into gold for value, upside, and diversification, but the rotation is easier when gold miners also offer good yields.

For context, let’s remember that for a long time miners have offered nothing of the sort. Even in the bull market dividends were not impressive; major miners were busy spending billions on new mega mine builds and top-of-the-market acquisitions (many of which failed). And then in the bear market dividends all but disappeared.

How mining stocks appear to generalists is an important question for the mining space right now. I’ve talked about this on stage a fair bit lately but haven’t written about it in some time, so let me revisit the topic.

But while those gains are great, the junior gold sector has barely benefitted at all. Explorers and developers are still sideways, wondering when gold’s ascent will filter down.

The answer is: when generalists start really rotating into gold. Below is a slide from my talk last week at the New Orleans Investment Conference. The chart is one way of capturing the opportunity ahead for gold stocks. 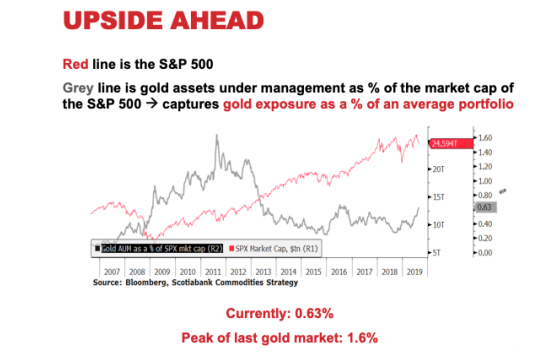 The point is that generalist investors still have very little gold exposure. Sure, gold allocations never get that big – but gold exposure as a percent of an average portfolio would have to almost triple from here to reach the ratio from the peak of the last bull market.

When that kind of money turns towards our sector, it has outsized influence because the gold space is so small. The next chart is from early in 2019 but it shows how gold stocks ramp when generalist dollars arrive. 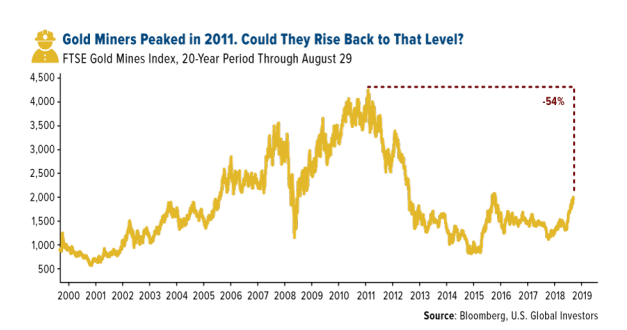 And the ramp up is very reliable. The next chart shows the current gold market in red alongside six previous gold bull markets. The patterns are all very similar – and they make apparent that the opportunity in gold stocks is almost all still ahead. 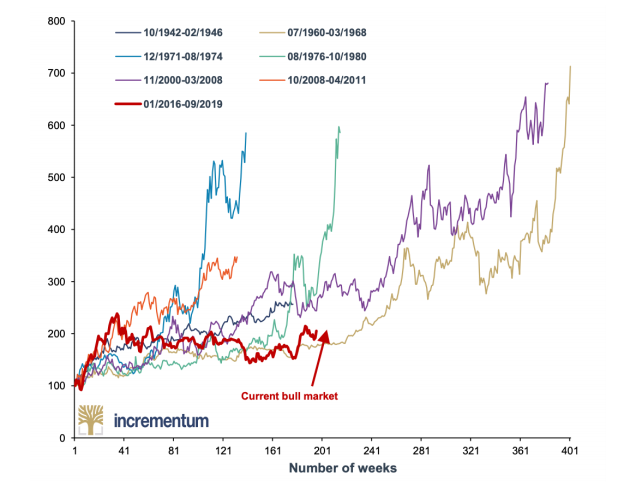 Generalist investors are arriving. In September I noted that big generalist funds that have not been interested in gold in almost a decade showed up at the Denver Gold Show to figure out how to position this time around. When I talk to teams from mid tier and major gold companies, they say generalists are starting to respond to their marketing efforts.

And on a more personal scale: more than half of the folks who asked me questions during the New Orleans conference started off by saying something like “I’m new to investing in gold stocks, so can you explain…”

Generalists are rotating. It always starts slowly – look back at those gold bull markets and note how each trades sideways for ages before lighting up – but when it happens it really happens. News of rising dividends from gold miners will help.

And because I don’t see a big trade deal happening, because interest rates are so low, because growth is lacking, because debts are so high – the macro context for gold is very strong. So while I would prefer that gold not lose 3 or 4% in a week, I finished last week as bullish on the yellow metal as I was when it started.