On the 4th July 2017 we recommended a company called Silver Standard in an article entitled:

Silver Standard Is Now In The Bargain Basement: Buy

At that time this stock was trading at $9.24 and we were of the opinion that it had a bright future. The stock had previously traded as high as $40.00 plus in 2008.  When we reviewed it, SSRI as it was known back then, had been in a downtrend for most of the previous 12 months as the chart below shows. 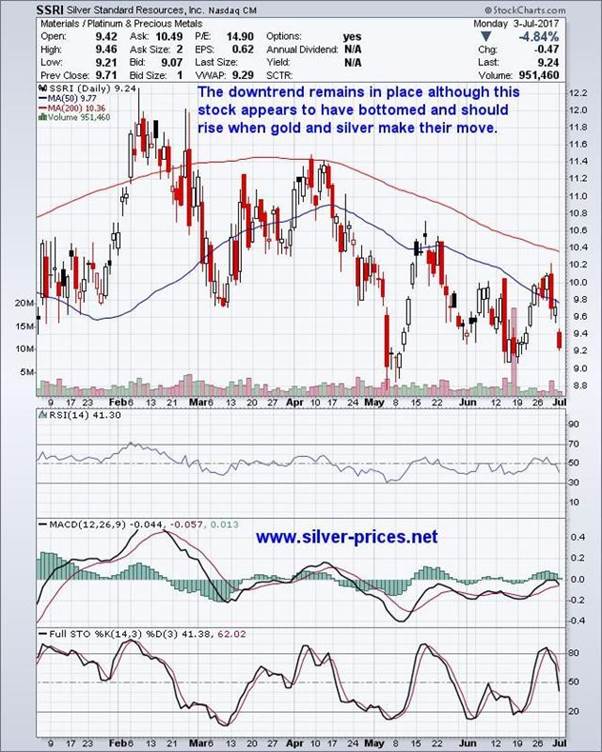 A lot has happened since then including a name change to SSR Mining Inc (NASDAQ: SSRM) (TSX: SSRM), so we will fast forward to today starting with their latest Q3 results which in my opinion makes SSRM a Buy at current price levels. Our review concluded that it was a still a Buy so we will hold the shares that we acquired and look to increase our position on “Dips’ in this market.

The standout in SSRMs Q3 results is in part the statement by Paul Benson, President and CEO who said, "we have an incredibly strong financial position with over half a billion dollars in cash and marketable securities." In this sector of the market that is a healthy financial position to be in and should cover their mining activities for the sometime.

They also reported positive income from mine operations totalling $51.9 million. Revenue in the third quarter of 2019 increased 29% relative to the comparative quarter of 2018, mainly due to a higher realized gold price on the output from the Marigold mine and Seabee Gold mines.

On the negative side there two items that we need to keep an eye on and they are: the AISC per payable ounce of gold sold increased in the third quarter of 2019 to $1,104 which is up considerably from $986 in the second quarter. There are reasons for this increase, however, we would prefer to see costs contained to a lower increment.

The second concern we have is that the Federal Government of Argentina instituted export duties on metal concentrate exports in September 2018. The export of silver, lead and zinc concentrates carry a levy of three Argentine pesos for every U.S. dollar of export value, or about $0.16. These levies are due to cease at the end of 2020 and are recoverable for projects such as SSRMs, as they are covered under a fiscal stability agreement. There is no reason to believe that this levy isn’t recoverable, but there is always the possibility that a new government would want to renegotiate a more lucrative deal next time.

These results were however given a favourable reception by the markets as the stock price jumped 7.91% to close the trading session at $15.00.

SSRM has a market capitalization $1.874 Bln, the average volume traded is 1,130,875 so the liquidity is good for those who want to be in and out on a frequent basis, the EPS is 0.16 and it has a P/E ratio of 93. The 52-week trading range is $9.65 to $17.56, so further price oscillations should be expected as the precious metals bull market unfolds.

A Quick Look At The Chart Of SSR Mining

We can see that it has certainly been a volatile ride so far, as the chart shows. Rallies have been followed by pullbacks, however, in general the trend is up. The technical indicators were in the overbought zone but they have now been unwound as some of the froth has dissipated. We were heartened to see the stock bounce off the 200dma which is steadily moving up behind the stock price. 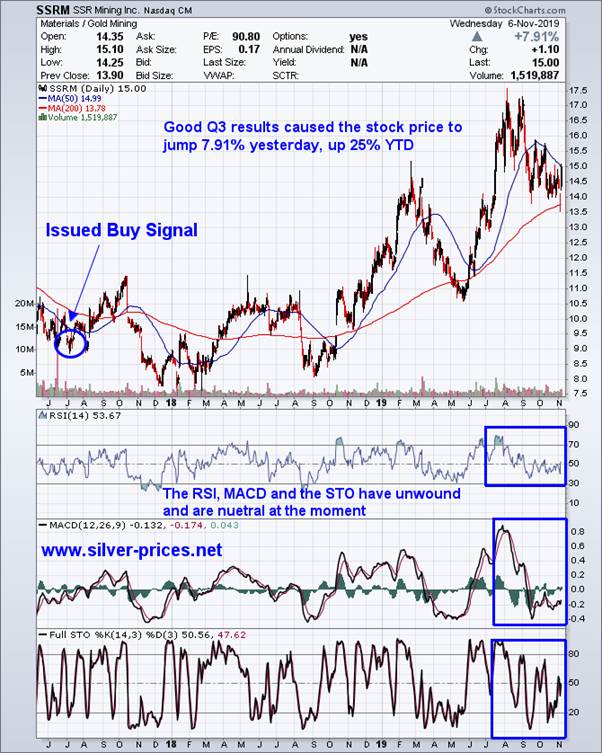 If you are of the same opinion as we are, that the price of both gold and silver are set to make significant progress, as we detailed in our recent articles entitled.