Gold is expected to continue to inch higher on short-covering as long as there is tension between the U.S. and China. Gold could spike higher if those tensions escalate. However, if there is a breakthrough in the negotiations then gold could plunge, retesting lows from earlier in the week. 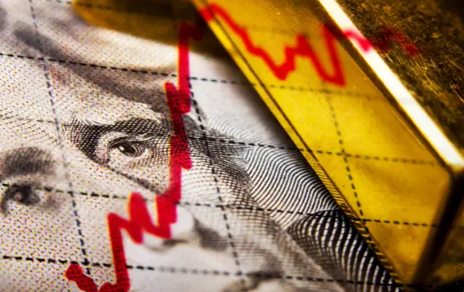 Gold futures are trading higher for a second session on Thursday as some of the weaker shorts continue to cover positions after a steep seven-day decline from the November 1 top at $1519.00. Gold traders are likely reacting to falling Treasury yields, weaker demand for risky assets and a lower U.S. Dollar. The price action in the four markets suggests a change in investor sentiment may be taking place.

The catalysts behind the price action are renewed concerns over U.S.-China trade relations. So far this week, gold has recovered about $25.00 of its recent $72.00 break. And so far it’s been all profit-taking and short-covering. Since the rally did not start at what I consider to be a value zone, I don’t think we’re seeing much speculative buying yet. Gold appears to be going through a normal short-term correction, following a sharp break.

The weaker shorts are being spooked by concerns over the lack of progress being made on the trade deal. Traders also fear the tension between the United States and China could flare at any time especially after U.S. President Trump on Wednesday threatened to ramp up tariffs on Chinese goods if the countries failed to reach a deal on trade.

Furthermore, the Wall Street Journal reported on Wednesday that U.S.-China trade negotiations had ‘hit a snag’ over farm purchases, with China not wanting a deal that looked one-sided in favor of the United States.

Gold is also being supported overnight by a report that showed China’s industrial output grew significantly slower than expected in October, as weakness in global and domestic demand and the draw-out China-U.S. trade war weighed on activity in the world’s second-largest economy.

However, perhaps keeping a lid on prices, or at least slowing down the short-covering were hawkish comments from U.S. Federal Reserve Chair Jerome Powell who told the Joint Economic Committee on Wednesday that negative interest rates sought by Trump are not appropriate for the U.S. economy right now.

Powell further added that the central bank would probably stop (with interest rate cuts) where it is unless there is a “material” change in the economic outlook.

Gold is expected to continue to inch higher on short-covering as long as there is tension between the U.S. and China. Gold could spike higher if those tensions escalate. However, if there is a breakthrough in the negotiations then gold could plunge, retesting lows from earlier in the week.

Gold traders will also get the opportunity to react to the latest data on U.S. Producer Inflation and Weekly Unemployment Claims. FOMC Members Clarida and Evans will speak along with Fed Chair Powell. Given their previous comments, I don’t expect them to say much that could drive gold higher.