In Friday’s article, we wrote that what comes up must co..rrect and gold has indeed shown to be in a corrective mode. We also wrote that the yellow metal was unlikely to break below the 61.8% Fibonacci retracement based on the previous upswing and while gold moved to this level earlier today, it didn’t break below it. At least not in any significant way – the few cents below this level doesn’t really count. Let’s take a closer look at gold’s overnight chart to see what the decline means. 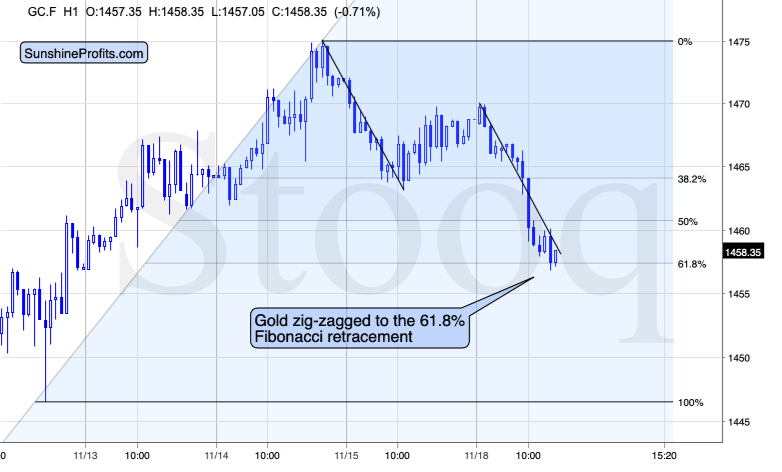 In short, it doesn’t mean much. All markets, including gold, quite often correct in a zigzag fashion, and they relatively often correct between 38.2% and 61.8% of the preceding move before continuing their previous move. That’s exactly what is happenning in gold.

Gold moved to the 61.8% Fibonacci retracement level based on the preceding upswing and it moved there in a zig-zag style. Gold reversed after reaching the retracement, so the bottom might be in and the yellow metal could be ready to resume its upswing shortly. If gold confirms the breakdown below the 61.8% Fibonacci retracement level ($1457), the bullish forecast for gold for the short-term might change, but that’s not the case so far.

Besides, the short-term correction in the USD Index that’s likely to contribute to higher gold, silver, and mining stock values in the short run is not over just yet.

Is the USD Index Done Declining? 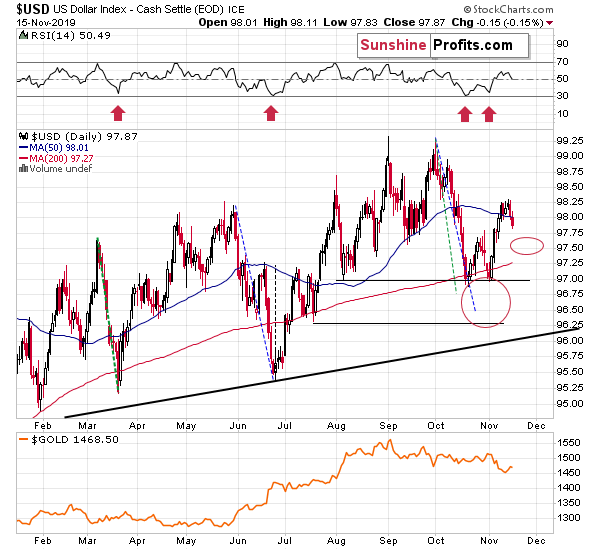 The breakdown below the very short-term rising wedge pattern resulted in a major decline. “Major” from the very short-term point of view as the following daily downswing has been the biggest daily decline that we saw this month. After the initial decline, the move lower continued and the USDX closed the week below its 50-day moving average. The 50-day MA has been providing support quite reliably in the previous months. It was not always strong support, but often meaningful enough to make it useful as a trading tool. While it stopped the decline on Thursday, the USDX broke below it overall.

The above breakdown opened the way to even lower USDX values.

The green and blue dashed lines represent declines that are similar to the October decline. The rallies that followed them were quite sharp, but they too had smaller pauses within them. Both: March-April, and July rallies consolidated after the USDX moved above its 50-day moving average.

The short-term decline that we saw so far doesn’t compare to what we saw in early April and in mid-June. Consequently, the odds are that the USD Index will decline some more before soaring to new highs.

This means that gold is likely to move higher before plunging. Consequently, the odds are that reports of gold turning bearish for the short run are premature.

Also, let’s keep in mind that this decline is taking place after both gold and silver invalidated their previous breakdowns in terms of daily closing prices. 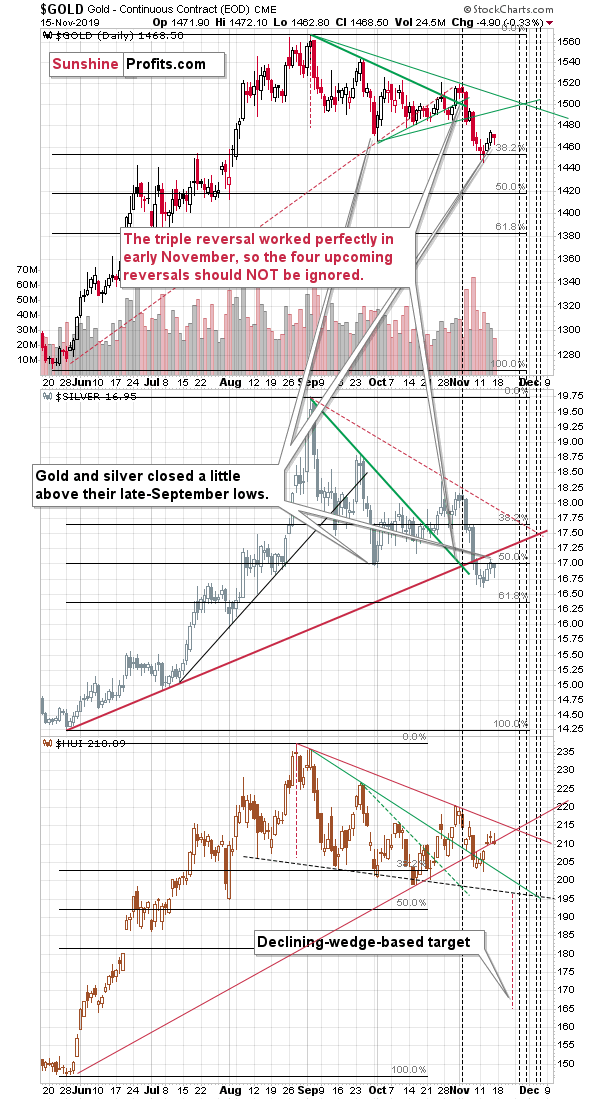 On Thursday, both precious metals closed slightly (but still) above their lowest closing prices of September. Silver didn’t move back above the rising red support/resistance line, but the breakdown below the previous low was invalidated.

The resistance provided by the lows is a good reason why gold and silver corrected on Friday and earlier today. But, just as the decline in the USDX doesn’t seem to be over, the rally in gold and silver seems to have more upside.

And the mining stocks? 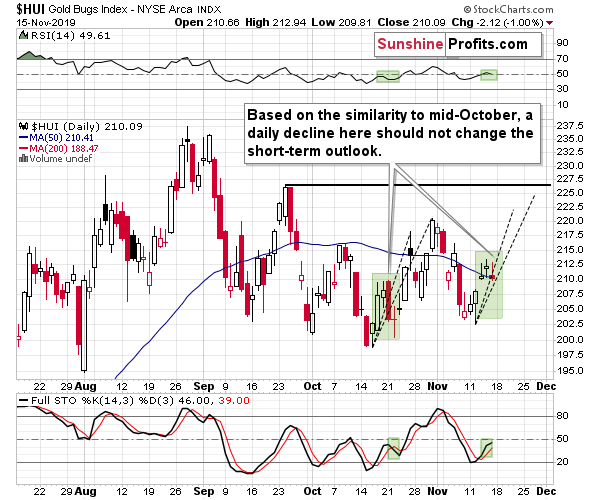 Looking at miners’ performance in one way provides us with bearish implications for the day, but looking from a different angle shows the silver lining.

The bearish case is based on the shape of the last three sessions. They look like an island top that formed right after the bullish reversal. Gold is down in today’s pre-market session, so gold stocks are likely to decline today as well, in tune with implications of the above-mentioned top formation.

On the other hand, such a daily comeback close to the start of the rally is exactly what happened about a month ago, and it was a relatively normal part of the upswing. The similarity may not be obvious at first sight, but please note the three intraday attempts to reach more than about half of the preceding downswing. In the following days, the HUI Index continued to rally, but not without a daily decline first.

The positions of Stochastic and RSI indicators confirm the similarity between these two cases.

All in all, even though gold moved lower today, it doesn’t mean that the short-term rally is already over.

The short term is one thing and the big move that’s likely to unfold is something quite different. The gold futures open interest (number of positions in gold futures) just exceeded its previous extremes and if it sounds as something of key importance to you – you’re perfectly right. There are two ways in which this major development is practically screaming what’s going to happen next. But one needs to know how to read this sign. Today’s Gold Trading Alert – the full version of this analysis – covers all the details to know before (!) the big gold price move happens. Please note that you can still subscribe to these Alerts at very promotional terms – it takes just $9 to read the details right away and then receive follow-ups for the next three weeks.