Gold and silver stocks setting up for 2020

The Fed has paused its rate cuts and Gold and gold stocks continue to digest and correct summer gains after reaching multi-year resistance.

The correction continues as there is little threat of an immediate break of resistance. It’s boring but this usually happens in precious metals bull markets.

Strong moves are followed by sustained correction and consolidation which gives way to the next strong move. That is what is setting up for next year.

First let me explain why the macro developments are likely to support precious metals in 2020.

One scenario is growth does not stabilize and the Fed is forced to continue rate cuts. This will lead to a steepening of the Yield Curve and lower real interest rates. Both developments are obviously bullish for Gold.

The other scenario is the economy stabilizes like in 2016 and inflation expectations begin to rise as commodity prices recover and the US dollar potentially weakens.

The same happened in 2016-2017 but the Fed was able to hike rates to keep precious metals in check. If this or something similar comes to pass in 2020, don’t expect the Fed to suddenly hike rates. In this scenario, real interest rates ultimately decline.

There isn’t a realistic bearish scenario for precious metals and that is why the asset class has held up quite well during a time when the Fed has paused its rate cuts and inflation hasn’t picked up yet.

With that said, we must keep in mind that more speculators in the Gold market need to be cleared out before the metal can begin its next upward move.

Gold’s net spec position often fell to 30% or even as low as 20% amid corrections during the bull years in the 2000s. A test of $1400 or even $1370 could be required to reduce that position to more encouraging levels. 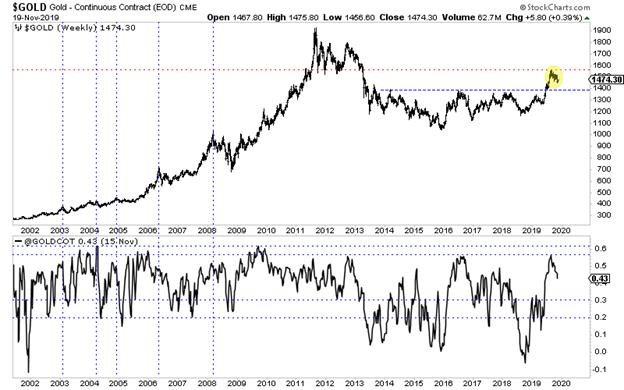 Meanwhile, the gold and silver stocks continue to hold up well.

As GDX has grinded lower, slowly, its advance decline line has continued to show positive divergences. In fact, Monday it closed at its highest level since February 2017!

Also, as GDX made a lower low against its October low, SIL, which represents the riskier and more volatile silver stocks made a strong higher low. 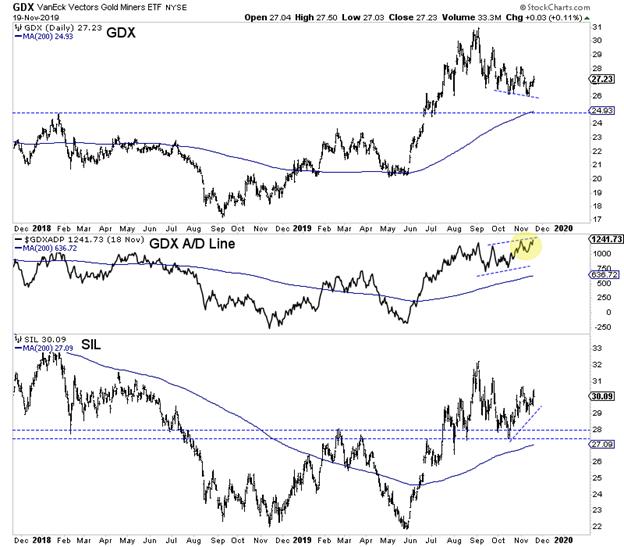 These positive divergences do not preclude Gold from testing $1400 or GDX and GDXJ from testing lower levels, but they do portend to potential future strength.

There is strong potential for the fundamentals to revert to bullish and that same potential could be expressed in the long-term charts of GDX and GDXJ. The major miner ETFs have formed huge bases that could lead to explosive upside breakouts in 2020. 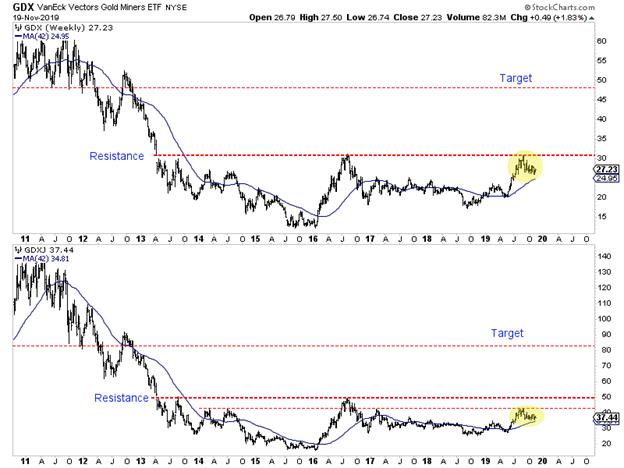 Given our outlook for 2020, the next few months could offer the last chance to position in gold and silver stocks ahead of that potential explosive breakout.

In our last editorial we noted that the market should provide us with good, low risk opportunities over the weeks ahead. This is not just lip service as since then we deployed some of our cash into two excellent juniors that reached low risk entry points.

We continue to focus on identifying and accumulating the juniors with significant upside potential in 2020. To learn the stocks we own and intend to buy that have 3x to 5x potential, consider learning more about our premium service.