Gold reversed yesterday, and so did the rest of the precious metal sector. Mining stocks and – what’s important – silver showed strength relative to gold and rallied even more than gold. Silver’s strength is important because it indicates that we are already in the second half of the short-term upswing in the precious metals market. If there only was a tool that would provide us with a more precise time prediction… Oh wait, there is one. And it just worked perfectly yesterday. 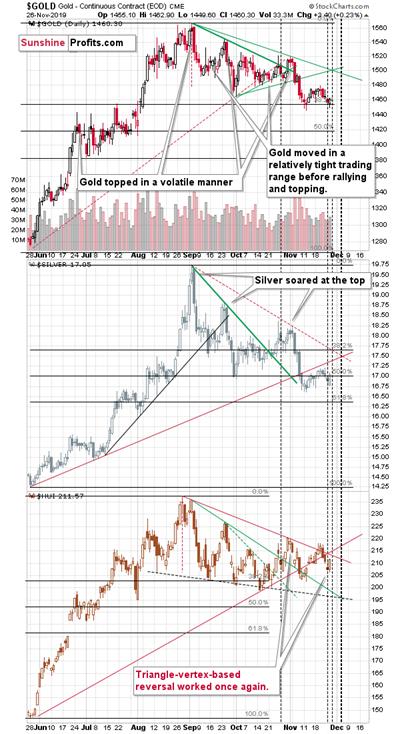 The technique is called the triangle-vertex-based reversal, but let’s just call it triangle reversals. When the rising support line crosses the declining resistance line, we have a vertex of a triangle. This vertex marks a moment when we are likely to see some kind of reversal. Sometimes it’s relatively clear in advance what sort of reversal we are likely to see, and at times it becomes clear only right before the reversal.

It wasn’t 100% clear recently, but after prices declined on Monday, we wrote that the turnaround is very likely. It was confirmed by the pre-market price action as well. However, what happened during the session made it even more obvious that we saw the start of yet another quick upswing. What’s not to like about such a bullish set of circumstances?

What we saw yesterday was not the only triangle reversal on the horizon. In fact, there’s one today and one early next week. Since this is the Thanksgiving weekend, the odds are that the particularly significant market action will be pushed off until the next week. But, once we’re there, things could get very hot very soon.

The True Seasonality of gold confirms the above.

On average, gold price has been spiking around late November and early December. November 26 is marked right on the gold chart. That’s the last pause before the final spike high in gold that is then followed by a decline to mid-December. This seasonality perfectly confirms what we can see based on the triangle reversals and what we can infer from silver’s relative strength.

Please note that while on average gold performs best in late November, the accuracy reading actually rises strongly in the next several days. This means that while the biggest price moves usually happened sooner, some of them were a bit late. In case of the times when gold soared sooner, it didn’t decline immediately. The take-away here is that even if the above forecast for gold is not 100% correct, and price spike doesn’t happen right away, it means that it’s still likely to arrive shortly.

Based on the triangle reversals, gold’s True Seasonality, and other factors, the following week is likely to include an important top in gold, silver, and mining stocks.

Apart from outlining the take-profit targets of our long position opened right after the November 12 reversal, the full version of this analysis features a helpful hint from yesterday’s action in mining stocks, and the analysis of both forthcoming precious metals’ triangle turning points, and silver Q4 2019 seasonality. Bottom line, these are invaluable tools in planning when and where to profitably switch market sides – just as our preceding success with the earlier short position. Please note that you can still subscribe to these Alerts at very promotional terms – it takes just $9 to read the details right away, and then receive follow-ups for the next three weeks. Profit along with us.