A duo of deals

We got big pieces of gold sector news on both Monday and Tuesday this week. The first announcement saw Kirkland Lake Gold (TSX: KL) make an all-share takeover offer for Detour Gold (TSX: DGC) in a deal valued at $4.9 billion.

Let me set the stage. The Detour mine in northern Ontario is a uniquely large operation, an open pit mine that churns out 650,000 oz. gold annually from a reserve of 15 million ounces, supporting more than 20 years of mine life.

Kirkland Lake bought the Fosterville gold mine in Australia a few years ago (by taking over Maven portfolio pick Newmarket Gold) and its standout success there discovering and mining super high grade gold made the company a market darling. It has been the best performing major gold stock in the world in the last few years. 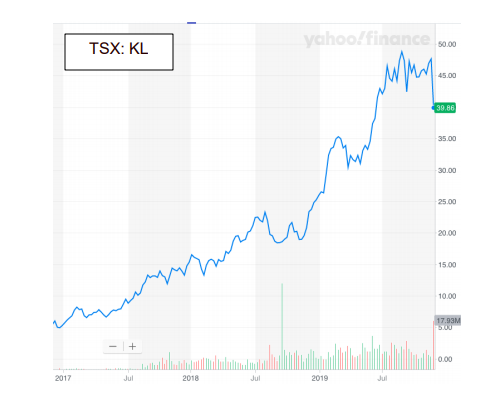 Its one weakness, though, has been its lack of reserves and so investors had been pressuring management for a deal to add ounces.

The Detour deal certainly does that…but Detour and Fosterville couldn’t be more different, with the Aussie mine averaging 25 g/t gold while the Ontario deposit grades well below 1 g/t gold.

On top of that, Detour has skeletons in its closet. The mine has been plagued with operational issues since it started producing in 2013. Activist shareholders prompted a management overhaul a year ago and things have improved since, but the details of those improvements are not yet clear (Detour had planned on issuing a new mine plan in the first quarter). Because of all the issues, Detour’s all-in costs are almost US$1,200 per oz., double the US$562 per oz. that Kirkland spends, on average, to produce its ounces.

Detour’s 650,000 oz. of annual production will boost Kirkland Lake’s output to 1.5M oz. per year in the near term and will keep production comfortably above 1M oz. a year beyond 2025 even if KL fails to find any more ounces at Fosterville. Those numbers make Kirkland Lake a top five gold producer in the world.

But scale certainly isn’t everything and so the market didn’t much like the deal: Kirkland Lake’s share price dropped 17%, which all but erased the 24% premium in the all-share offer.

And an all share deal leaves Kirkland Lake’s $600-million bank account available for another deal. Kirkland is riding high these days. Detour is a step outside of its comfort zone but if it works it will work well. And if the company indeed uses its cash for another deal, Kirkland could step up into the elite league of major gold miners

The second deal saw Aussie miner Evolution Mining buy the Red Lake Gold Complex from Newmont Goldcorp for US$375 million in cash plus up to US$100 million payable on new discoveries (US$20 million per each million ounces delineated, capped at 5 million oz.).

Evolution sees opportunity to return Red Lake to its better days and told the market to model Red Lake as an operation producing more than 200,000 oz. a year for US$1,000 per oz. To get it there is going to take time and attention: Evolution outlined a 3-year plan to invest US$150 million into the mine complex, with US$100 million funding new mine development and US$50 million for exploration. The company will also optimize processing and improve mining methods to reduce dilution (the amount of unmineralized rock that gets mined alongside ore).

The new discoveries part of the deal is interesting. Newmont Goldcorp wasn’t spending on exploration but to include in the deal a substantial exploration requirement and a discovery balloon payment means they must see significant potential in the camp.

Evolution is a mid-tier Australian gold miner. It has five wholly owned mines and a stake in another. Collectively those assets are expected to produce 725,000 to 775,000 oz. gold in 2020.

Red Lake’s 150,000 oz. will layer on top of that but as I said Evolution sees the operation producing 50% more than that annually once it gets the attention it deserves. Reserves at Red Lake currently stand at 2.1 million oz. in rock averaging 7 g/t gold, within a resource body totaling 7 million oz. and averaging 11 g/t gold.

High-grade gold camps like Red Lake are rare. Ones for sale with an operating mine and significant exploration upside are incredibly rare. Evolution clearly saw an opportunity to not only enter North America but to also turn around a mine that needs exploration and operational attention. Evolution has done that before, with its Cowal mine, and is taking on A$600 million in debt to buy Red Lake and invest in the asset to do it again.

Stepping back: what do the deals mean for the mining space?

First, they validate the thinking that majors are ready to start dealing. Years of cost cutting and optimizing have put many gold miners in pretty good financial stead; what they lack is not money but reserves and growth. At some point that setup had to mean more M&A and these deals confirm that trend is underway. Australian miners are leading the charge because the bull market has been underway Down Under for years already, but that’s ok: the threat the Aussies could scoop up all the good assets should in fact encourage North American operators to start making moves.

Second, the Red Lake deal clarifies the situation in that camp and establishes a valuation peg. Between Newmont putting its mine up for sale, Pure Gold building a new mine, and Great Bear making its huge discovery, Red Lake has been the subject of endless M&A hypothesizing. With this deal one major question has been answered and a value peg has been established. To be honest, I thought Pure Gold would have gained more on the news because Pure Gold’s Madsen project is right next door, will be in production in less than a year, and offers higher grade ore that’s closer to surface. Perhaps the market doesn’t think Evolution has the capacity to also buy Pure Gold and therefore didn’t react, but I think the Red Lake deal establishes a per ounce foundation to value Pure Gold and Great Bear, which is helpful in a market where valuations are still all over the map.

Third, Red Lake will get exploration attention, which is great. It deserves as much.

Fourth, activist shareholders will be encouraged. I won’t go into the details of the Detour boardroom battle but a battle it was. And while the key activist shareholder didn’t win, their pressure had a clear impact and Detour responded by replacing some board members and being much more forthright about operational challenges and their approach to recreating lost value. As a result, Detour’s share price gained 150% in a year and now the company is getting taken out.

Boardroom battles aren’t fun and they suck up a lot of time and money, but they are an important option when a management team is entrenched and not generating shareholder returns. The Detour experience is a good reminder of that and this happy end to that tale will likely encourage other shareholders to take action when action is needed.

Deals are good. It’s simple but true. They demonstrate confidence, they peg valuations, they encourage peer companies to act before getting left behind, and they move money around, making it available within companies for other assets and within portfolios for other stocks.

From that angle, it’s been a good week!