Silverbugs? Is it time for silver stocks to blast higher?

In 1973, planes loaded with 35 million ounces of silver flew to Switzerland.

The investment was initially designed as a hedge against inflation, which was becoming rampant in the United States.

The gold standard had just been lifted and the value of the U.S. Dollar was plummeting.

During the early 1970s, buying gold was forbidden, so silver was the best alternative. And three brothers took advantage.

In 1974, William, Lamar, and Nelson Hunt acquired futures contracts for an additional 55 million ounces – just under 10% of global production.

By 1979, according to the New York Times, the Hunts owned between 150 and 180 million ounces of physical and paper silver. As such, they were the largest private silver holders in the world.

The Hunts drove prices up so rapidly, even jewelry companies like Tiffany’s took notice. They ended up taking out a full page ad in the New York Times to draw attention to the matter. 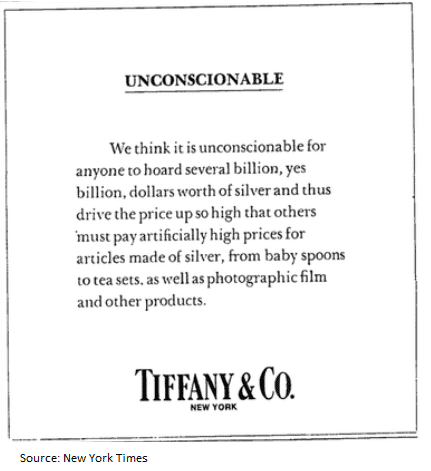 By January 1980, the Hunt brothers controlled 69% of the paper silver market on the U.S. COMEX market.

They were massively leveraged. And used both their physical silver and other stock positions as collateral.

In March of that year, the Chicago Board of Trade (CBOT) changed the rules of the game. The CBOT suspended the creation of any new silver contracts.

At the same time, COMEX cracked down and capped the position size at 3 million contracts. The combined effect was quick and drastic on the Hunts.

The margin calls began on the Hunts’ paper holdings and their powerplay ended.

The Hunts’ fortunes came crashing back down to earth on “Silver Thursday” in March 1980. The end result was a spectacular crash in the markets where silver fell over 30% in days.

What is a Silverbug?

[ sil-ver-bak ] noun an older male gorilla, usually the leader of a troop, whose hairs along the back turn gray with age.

Wait, that’s the definition of a silverback, not silverbug. But if I delete gorilla, I think that’s a fair assessment of silverbugs.

I like the silverbugs. Their optimism and conspiracy theories are always entertaining.

These days, silverbugs have every reason to shout from the rooftops.

Even with spot silver trading mostly rangebound, many silver stocks are at or near levels not seen in 3 years. 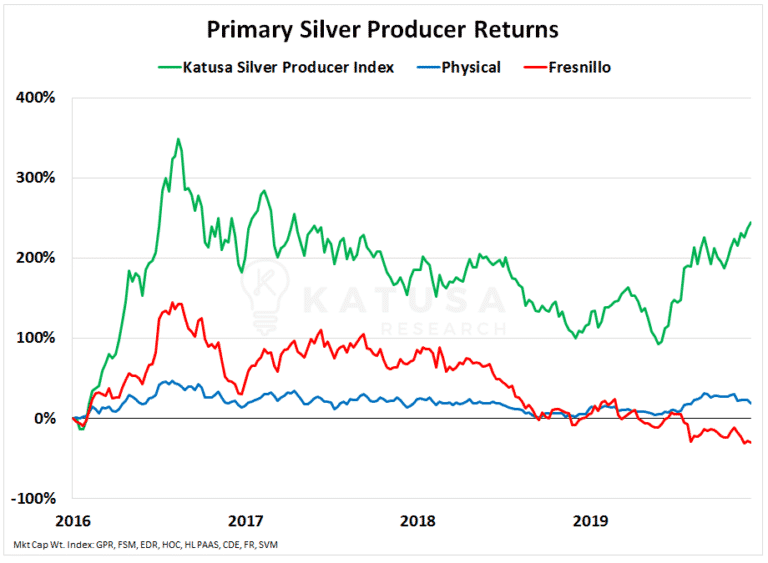 So, what can we expect if this is just the early innings of a massive silver run?

Below is a chart which shows the epic booms and busts in silver over the decades. 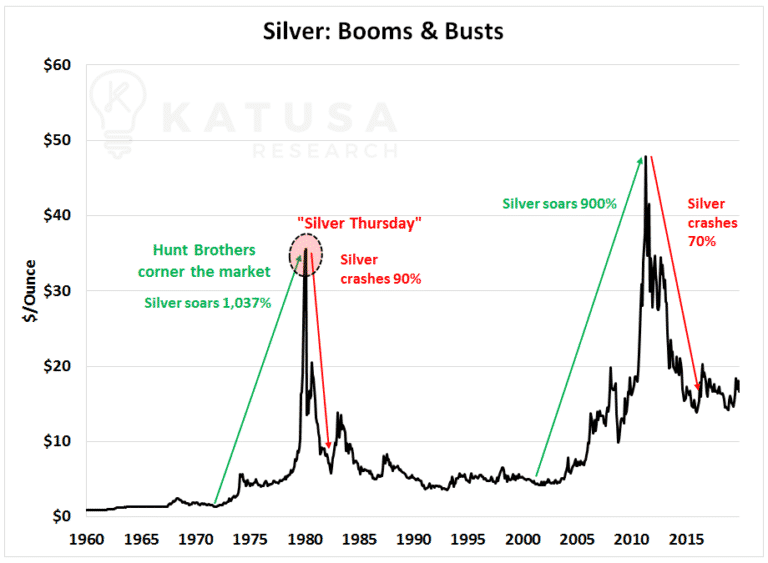 Silver had a second spectacular rise before and during the global financial crisis in 2008. From 2000 to 2010 the price of silver climbed over 900%, well surpassing gold’s performance of 600% over the same time frame.

Just How Big is the Silver Market?

Many investors may be unaware, but the silver market is quite small.

Last year, 840 million ounces of silver were produced worldwide. Using a silver price of $16 per ounce, this makes it a $13 billion dollar a year industry.

For comparison, last year 108 million ounces of gold were produced. At a gold price of $1,400 per ounce, that represents $156 billion worth of value. That’s 11 times the size of the silver market.

To truly show a commodity comparison, we can make things visual.

Below is a chart showing the annual market value of mainstream commodities. 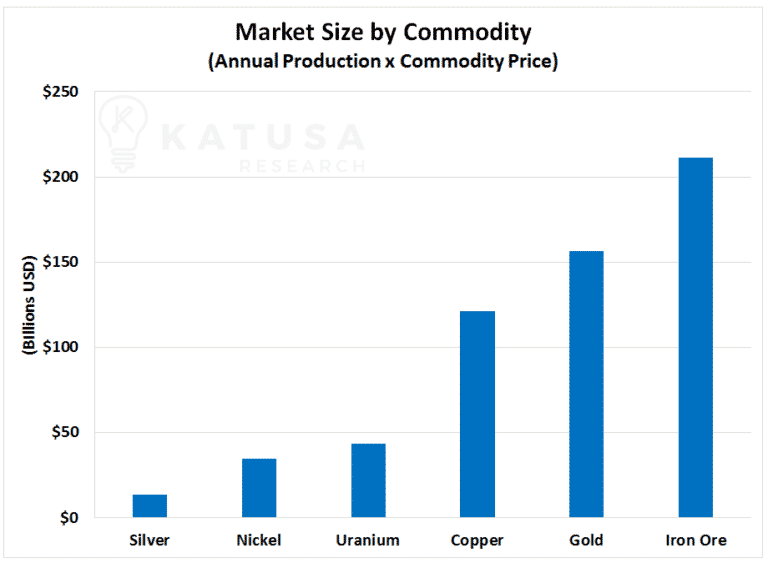 One of my first big scores for myself and my subscribers was in 2006. I was doing due diligence down in Mexico, and I was the first to go down an old mine shaft. The ladder broke and I fell down to the base of the shaft. Unfortunately, the base was covered in bat dung.

I covered my face instantly with my shirt, knowing what I just fell into and am lucky to be alive. I ended up spending 5 days in the ICU. But that cave led us to a mega silver deposit and 10-bagger win and one of the first large financings I led.

These days it’s getting harder and harder to find good silver deals. There just aren’t that many legitimate new projects.

This has to be a scary thing for a company like Fresnillo, the world’s largest silver producer.

Below is a chart of Fresnillo’s average head grade. If you’re not a mining engineer, head grade is the average grade of ore that goes through the milling operation. The higher the grade, the higher the quantity of metal available to be processed. 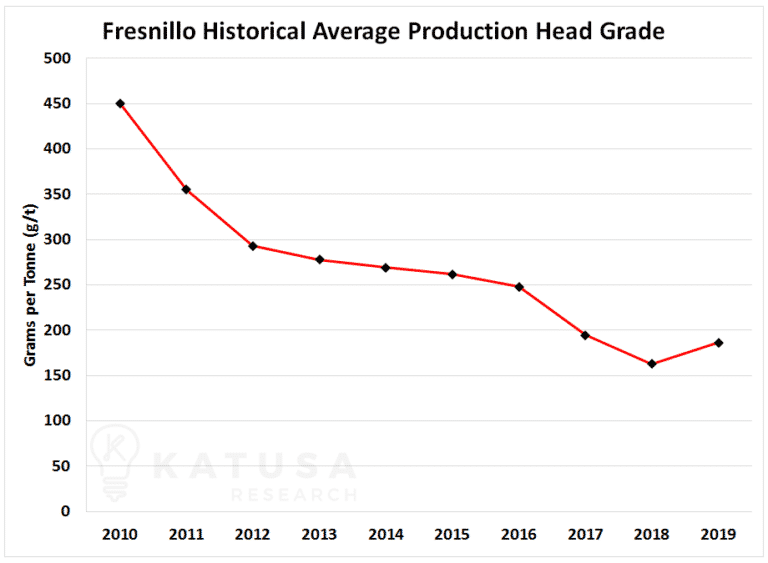 The average head grade has fallen by over 50% since 2010. This is not a good situation for a miner. In a world where input and production costs are rising yet profit per tonne of rock has fallen by 50%, this poses serious long-term potential problems.

The key to solving this issue is new high-grade production. The problem is, finding world class deposits is becoming harder and harder. This makes new discoveries that much more valuable.

In the chart below, you’ll find the performance of a watch list of silver miners that are on our radar. 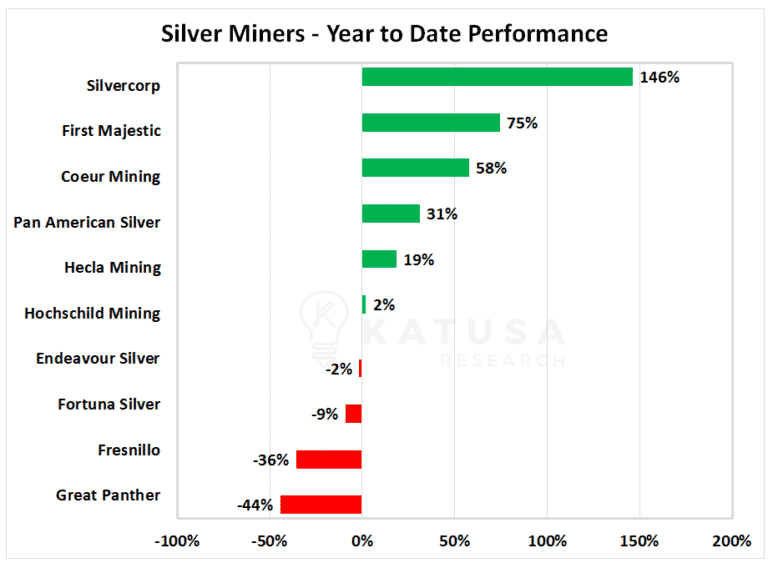 My database of silver miners doesn’t stop at just the producers – I know all the best development and exploration silver plays out there.

We literally just closed our silver position in the KRO portfolio for over a 70% gain in less than a year.  It wasn’t some illiquid junior.  It was one of the largest producers of silver in the world.  We used my alligator approach to be patient until it was right and it worked out well.  70% gain in under a year on a very liquid stock is a great score.

In 2019, we saw a nice run up in silver and gold stocks. In this month’s issue of Katusa’s Resource Opportunities we just locked in a quick +70% gain in one of the world’s best run companies.

2019 was a liftoff year for the precious metals sector. And if this is truly the early innings of a massive gold and silver bull market, then you’ll want to ensure you have core positions in the best run and leveraged companies in both silver and gold.

Comparing apples to apples with the biggest names in the business is how I set my benchmark. Here is how our portfolio is doing thus far in 2019: 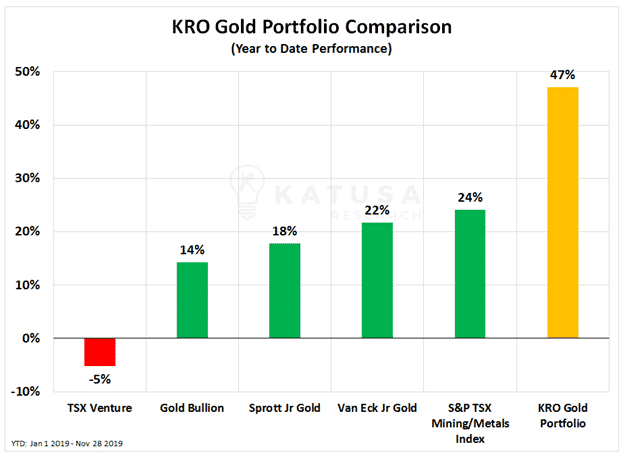 My finger is on the pulse of the junior markets and I am looking at a handful of opportunities – including financing deals and value buys – right now for 2020 and beyond.

What Can I Expect During Tax Loss Season?

Last year we profiled the gold and silver sectors as ripe for a tax loss fire sale and a potential panic rally.

At the time, senior gold companies were leading the charge down. It was a telling sign of where institutional and passive fund money was going.

Though tax loss selling comes around every year, this season’s opportunities may prove to be particularly juicy for investors.

However, stocks that are already under pressure now may not be out of the woods yet. 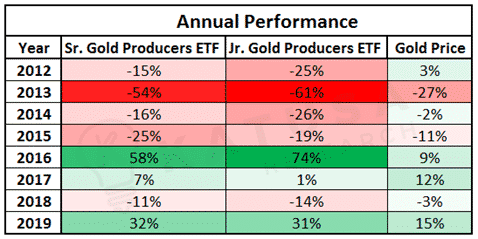 Companies with proven, low-cost deposits in safe jurisdictions, led by strong management teams, are the kind of companies that we look out for at Katusa Research.

And of course, this applies across the entire resource sector – not just gold.

Tax loss season may be prime time for building portfolio positions, but that doesn’t mean you get to skip your due diligence. You still have to find the right companies to buy.

But luckily for our Katusa’s Resource Opportunities subscribers, we’ve already done all of the leg work for them.

We are constantly filtering through companies in the resource sector, updating and reassessing valuations, in order to find out which companies are worth their share price.

And at the end of the year, when tax loss selling is in full swing, my readers will know which companies they should be looking out for – and what the right price to pay for them is.

December is one of the best times of the year to buy stocks on the TSX-Venture.

In the chart below you can see that during the previous 20-year period, the TSX-V equities seasonally loved December, January and February… 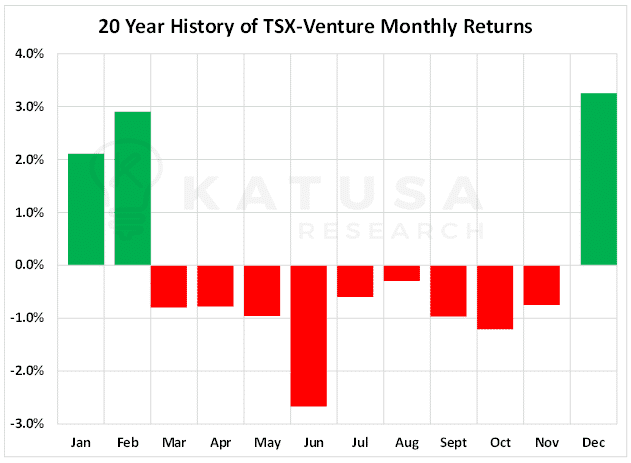 If you’ve missed out on the 2019 mini-run in silver stocks and gold stocks, I’ve outlined 3 companies that I think are great tax loss buys in my latest monthly report.