Jeffrey Gundlach, CEO of DoubleLine Capital LP (DoubleLine®), stated in a recent interview that the metals market is signaling 10-year Treasury yields may be heading to the highest level since June (Jeffrey Gundlach Sees Bad News for Treasury Bulls in This Metals Indicator, by Katherine Greifeld, Bloomberg, December 17, 2019).* He is referring to a unique relationship of copper and gold prices to the 10-year Treasury yield. In his 2017 forecast, Mr. Gundlach noted that the copper-to-gold ratio (CGR) was a "fantastic" indicator of interest rates. This sparked my interest and subsequent analyses documented in six Kitco News commentaries over three years.

Is Mr. Gundlach right this time? Based on my past analyses there is every indication that he is.

The recent Phase I U.S./China trade deal and more certainty about the Brexit date, outcome expectations aside, has created a “risk-on” sentiment in the markets. Copper prices have rallied and gold prices, although resilient, are fairly static. In this environment the CGR rises and typically interest rates do too. There has been a particularly strong correlation of the CGR with the 10-year U.S Treasury yield since early-June for both “risk-off” and “risk-on” cases. August was a good example of the former when trade and Brexit uncertainty caused copper prices to fall and gold to rise. The CGR plummeted with yields until the 10-year made a low of 1.43% on September 3rd.

The [copper-gold] gauge has worked “phenomenally well” as a short-term predictor of where Treasury yields are headed, Gundlach said.

“It’s one of the best indicators for near-term movement -- for the next month or next couple of months -- for 10-year Treasury yields,” Gundlach said in a phone interview. “It’s remarkable how well it’s worked and as time goes by, I feel more and more inclined to follow it and act on it.”

Mr. Gundlach predicts a yield of 2.15% is possible based on the CGR in the near-term. Based on the same indicator, he affirmed the September low was indeed the bottom for 2019. Friday’s yield closed at 1.9170%.

Monitoring the stability of the CGR can further enhance the interpretation of this indicator, the topic of previous commentaries listed in Figure 1. In volatile markets, stability analysis by lambda-Map© can anticipate highs and lows of the CGR and a change in direction for yields. For less volatile conditions, a stable CGR can portend periods of low yield volatility.

Figure 1. is a chart of the CGR and 10-year Treasury yields from December 2014 to the present. Superimposed on these two traces are numbered blue squares denoting analysis intervals associated with my six Kitco commentaries including this column.

It’s important to note when the CGR and yields track and when they diverge. My analysis has concentrated on periods of high positive correlation because they enable the creation of high-fidelity yield models based on copper and gold prices. These models can in turn produce statistical upper and lower bounds for yields. In a moment, we’ll compare Mr. Gundlach’s latest prediction with my most recent upper bound.

But what happens when correlations turn negative and the two traces diverge? Jeffrey Mayberry, Co-Portfolio Manager of the DoubleLine® Strategic Commodity Fund, has studied the relationship of the CGR and 10-year Treasury yields and makes this important observation:

The ratio’s absolute level is irrelevant. What matters is its direction – and whether the yield on the 10-year Treasury moved in the same direction or diverged. In past episodes of divergence, the 10-year yield has eventually tended to follow suit of copper-gold (“The Power of Copper-Gold: A Leading Indicator for the 10-year Treasury Yield,” Jeffrey Mayberry, DoubleLine® Funds)

Note the “Divergent Period” in Figure 1. The CGR trend of lower-lows (orange dashed line) is contrary to the yield trend of higher-highs (blue dashed line) until the latter peaks in October, 2018. By the Mayberry assertion, the CGR trend lower anticipated the fall in yields after the October peak with continuing decline through the summer of 2019. High positive correlations between the CGR and yields resumed in early-June 2019.

Looking at a seven-year record, the 3-month rolling correlation of the CGR with the 10-year U.S Treasury yields has exceeded +0.5 more than 50% (52.2%) of the time; and greater than +0.8, by 25.5%. Periods of divergence (i.e. negative correlations) are rarer occurring 19.9% of the time. The latter-half of 2019 marks the longest period in seven years of positive correlations exceeding +0.8. 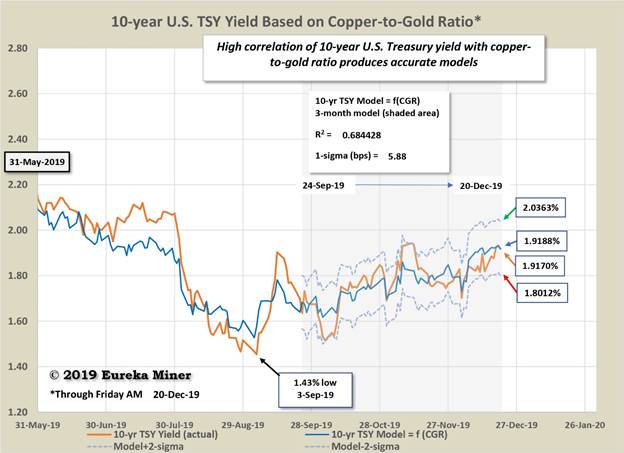 Comparable to the weekly updated models that preceded it since June, the statistical error is 5.88 basis points (bps) with an R-squared of 0.68. Although the R-squared has fallen some in the last several weeks, it is on the rise again and errors of 1-standard deviation have remained in the 5-7 bps range since early summer.

Importantly, the model provides upper and lower 2-standard deviation bounds for yields. The upper bound suggests yields just above 2% are possible in the near-term with a floor near 1.8%. Friday’s yield estimate is only 0.2 bps from the actual yield (1.9188% vs. 1.9170%).

Note how yields have risen since the September 3, 2019 low consistent with Mr. Gundlach’s observation and that the current upper bound of 2.0363% is close to his prediction of 2.15% for the near-term.

A stability map, or lambda-Map©, of a commodity ratio experiencing high volatility is useful to divine directional change and anticipate a local extremum (maximum or minimum) of the ratio. Following Mr. Mayberry’s observation, this same technique applied to copper and gold prices should presage a directional change in the 10-year Treasury yield as well as the CGR.

Realized volatility is an excellent metric for analyzing the stability of market valuations like the CGR. Expressed as a percentage, it is the standard deviation of the ratio normalized by its mean over a fixed time period. Fig. 3 is the 3-month (Y-axis) and 1-month (X-axis) realized volatilities of the CGR. A stability trajectory for each case sequentially connects the data points of the lambda-Map©. 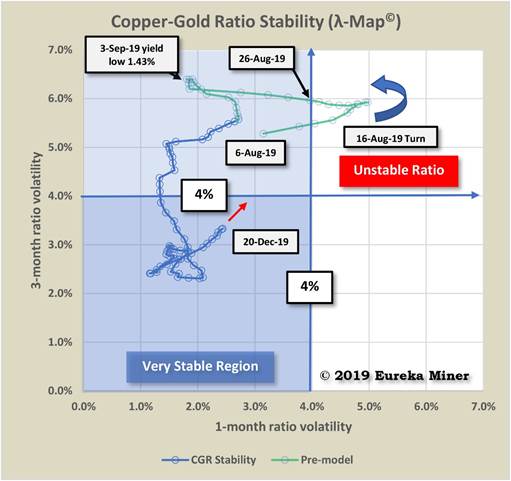 A 13-year history of CGR volatilities indicates that 50% of the time, 1- and 3-month volatilities are less than 4%. Accordingly, we say the ratio is stable when volatilities of both time bases are less than this limit. Beyond these limits, the ratio can decrease (increase) rapidly as gold and copper prices move in opposite directions. This can occur during “risk-off” market stress when gold is rising and copper is falling or “risk-on” market exuberance (gold falling, copper rising).

Such turns in the upper-right quadrant are key. In this case, the turn anticipates a bottom in the CGR followed by a yield low 11 market-days later (September 3, 2019). After these bottoms, stability steadily improves from both a short- and longer-term basis until the trajectory enters the “very stable” lower-left quadrant (shaded a darker blue). On December 4th, the CGR 1-month stability made a low with currency-like volatility (1.16%). The red arrow, however, suggests decreasing stability now that copper prices are on the rise and gold price is fairly stationary.

What does this signal for Treasury yield volatility? 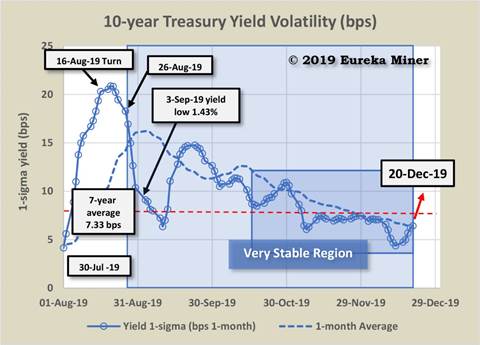 Yield volatility for this analysis is taken as the rolling standard deviation of yields over a 1-month period expressed in basis points. For reference, the 7-year average for such a volatility measure is 7.3 bps.

As market anxiety increased in early August, yield volatility increased from a below-average 4.6 bps to over 20 bps by the August 16 stability turn. Notably this is during a period of increasing positive correlation between yields and the CGR. Past the turn, volatility decreased as yields reached their low on September 3rd and then oscillated with declining peaks, and troughs near the long-term average.

Comparing the last two charts, the shaded stability rectangles of Figure 3 are superimposed on the time history of Figure 4. In Figure 3, the stability trajectory moves into the stable left-half plane (light blue) on August 26th and the yield volatility begins to pick up its pace of decline in Figure 4. As it enters the very stable region, yield volatility is confined to a range of 8.6 to 4.4 bps.

The red arrow indicates that now the volatility is increasing rapidly, albeit still below the long-term average. As it crosses the 1-month moving average, we can expect higher volatility with a rising CGR.

Copper prices are key to monitor as well as the Chinese yuan in the coming weeks. I had stated last month that the red metal moving above $6,000 per tonne-level ($2.72 per pound) was a signal that U.S./China trade negotiations were moving in a positive direction. That threshold was exceeded with the Phase I deal - March Comex copper closed last week at $2.81 per pound. Copper is negatively correlated with the Chinese yuan (3-month, -0.75) so as copper rallies, the yuan should strengthen below 7 USDCNY. This did occur at the announcement of the deal although it drifted slightly above that level Friday (7.0058 USDCNY).

Higher copper prices and a stronger yuan suggest the CGR and yields will continue to rise in the near-term as Mr. Gundlach predicts. Volatility of both should also increase per the above analysis. If the CGR enters the upper-right quadrant, a turn in the stability trajectory toward improving stability should signal a top for the CGR followed by a peak in yields.

Hats off again to the DoubleLine® team for discovering a metals indicator that does work “phenomenally well” in both “risk-on” and “risk-off” markets. Copper-gold stability analysis enhances the interpretation of this indicator for both high and low volatility situations. The market events since spring provide testament to the power of that dual relationship.