It has been a week of surprises since the last updates were posted. First, I had not expected Iran to retaliate following the murder of its top General by a US drone, but it did, despite the risks, as it was politically necessary to assuage the extreme anger of its population who demanded revenge. The next surprise was that Israel and the US did not use this retaliation as an excuse to bomb Iran back to the Stone Age, which is what they really want to do. As we know, the long-term goal of Israel and the US is to subjugate Iran, and they will not stop until they attain this goal, and so it goes on. It appears that there was a bit of theater involved in Iran’s retaliation, as it clandestinely signaled its intentions which allowed US forces to get out of harm’s way. Perhaps US forces did not then launch a blitzkrieg out of consideration for this courtesy.

Regardless of the muddled and unpredictable fundamental situation, which included the accidental downing of a passenger plane by Iranian defensive missile batteries, the charts allowed us to make a reasonably accurate prediction regarding what was likely to happen to the gold price. The call for a near-term top in the PM sector made on the site on Monday looked incorrect the following evening when gold suddenly surged about $35 on news of the retaliatory Iranian missile strike, but when it later became apparent that there were, strangely, no US troop casualties and no further action against Iran, gold and silver reversed dramatically and dropped quite hard as the tension then looked set to ease, at least over the short-term. Technically what happened is that gold pushed quite deep into heavy overhead resistance, becoming very overbought at a time when COTs were showing extreme readings, and was thus vulnerable to a sudden reversal. The action around this time illustrates an important point, which is that when gold rises due to sudden geopolitical developments, the gains tend not to stick – what really matters and is the big driver for gold at this time is the insane monetary expansion that is going on, which is being undertaken in a desperate attempt to postpone the systemic implosion that is baked in for as long as possible. As we have already observed in these updates in recent weeks, gold is already in a raging bullmarket against a wide variety of currencies, and it won’t be all that long before it’s in a raging bullmarket against the dollar too, as the Fed sets the stage for hyperinflation.

There are two big and compelling reasons for the US government to tank the dollar. One is that it makes US exporters more competitive, and the other is that it can use the mechanism of inflation to wipe clean its colossal debts, by paying them off in devalued coin, printing vast amounts of money to pay them off, in the process legally swindling the foolish creditors out of their dues. This is precisely what the Weimar Republic in Germany did in 1923 to eliminate the unfair reparations imposed by the Treaty of Versailles, which were unfair also because Germany didn’t start the 1st World War – it was tricked into it by the allies, because the British Empire was scared of Germany’s rising industrial and military might and wanted to destroy it, 100 plus years of propaganda lies about Germany being responsible for the 1st World War notwithstanding.

We’ll look at the dollar a little later. First we will review gold’s charts, starting with the 10-year chart.

On the 10-year chart we see that gold is now a bullmarket, even against the dollar, and is currently challenging the heavy resistance arising from the 2011 – 2013 top area. The second attack on this resistance in the space of few months got further because of the Iran crisis, and if this cools any more short-term, it will probably lead to gold settling into a trading range before it mounts a more successful attack on this resistance. A point to note here is that while the resistance up to the 2011 highs in the $1800 area looks like a major obstacle, it’s not such a big deal as many think, given the rate at which the dollar is now being debased. 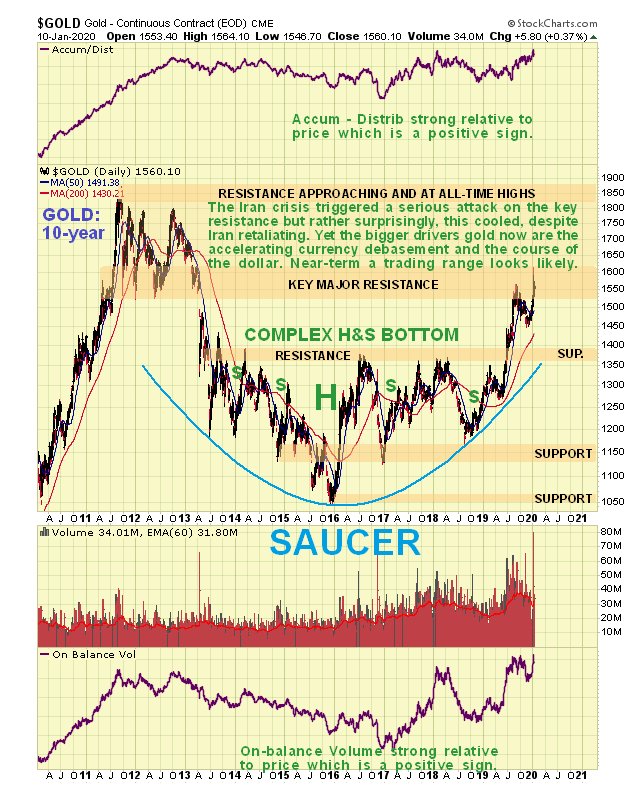 This week it’s worth also taking a quick look at a 3-year chart for added perspective. This chart shows us that since the bullmarket started in mid-Summer, we have seen 3 sharp runups punctuated by 2 bull Flags. While the 2nd of these Flags targets the $1800 area, we have to factor in that gold now has much more overhanging supply to contend with than on the 1st runup, and this, coupled with quite extreme COT readings, inclines to the view that this will need to be worked off. Hence the interpretation that it will probably need to consolidate for a while before it makes significant further progress, although it obviously won’t if the US starts a serious bombing campaign against Iran. The Fed’s increasingly manic money printing will eventually drive it higher, of course 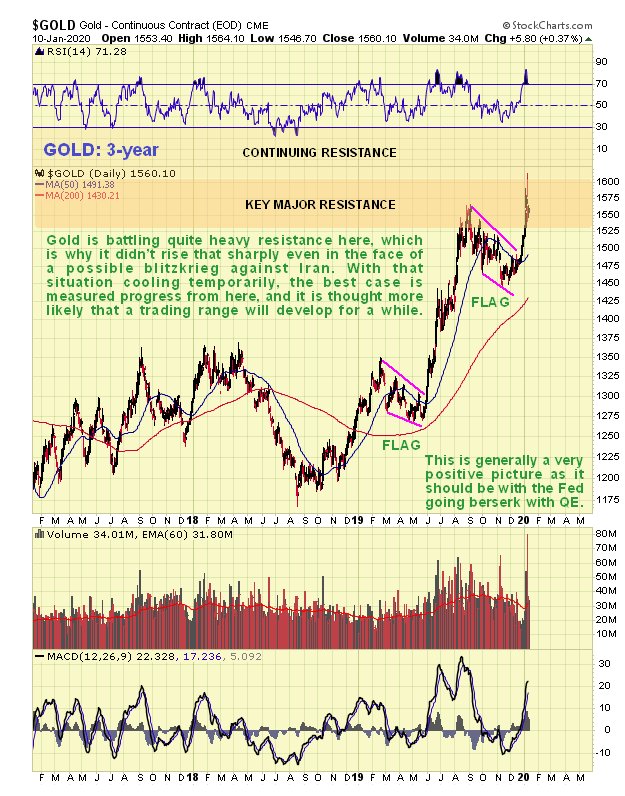 On the 6-month chart we can see the interesting price action around the Iran crisis over the past week or so. A bearish “shooting star” appeared on the chart last Monday, which we took as a sign that gold was forming a short-term top, but then overnight on the 7th to the 8th it surged briefly above $1610 when Iran lobbed missiles at US bases in Iraq, which had many concluding, not unnaturally that this would trigger a major Israel – US bombing campaign. When it became apparent that there were no casualties from the Iranian attack and no US counter strike, tensions quickly cooled and gold lost ground fast the next day, putting in a big high-volume reversal candle, approximating to another “shooting star”. Normally such action is followed by a retreat at least for a while, and some stocks, like silver stock Coeur Mining (CDE), that we ditched a while ago, got clobbered. This is why gold is expected to settle down into a trading range for a while before mounting another attack on the resistance. 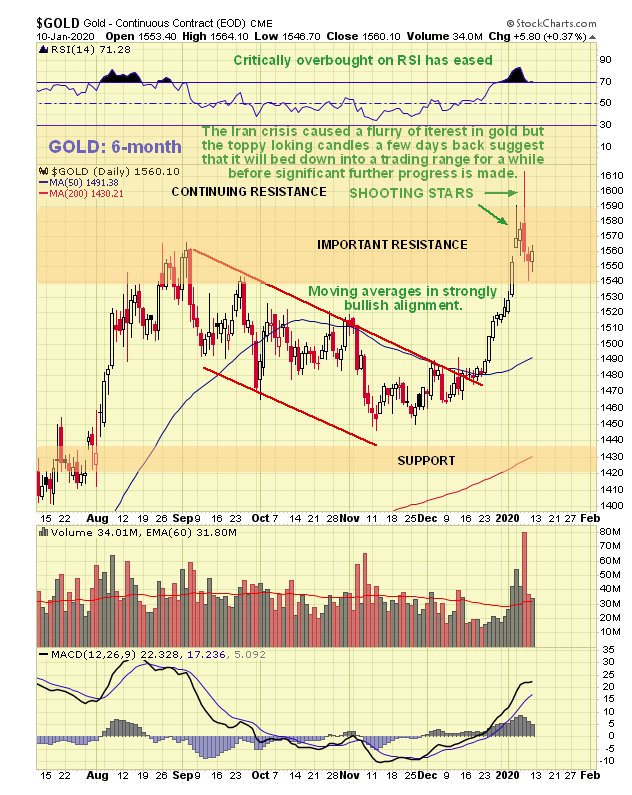 Another factor suggesting that gold will consolidate / react back for a while is the latest COT, which shows still very high Commercial short and Large Spec long positions… 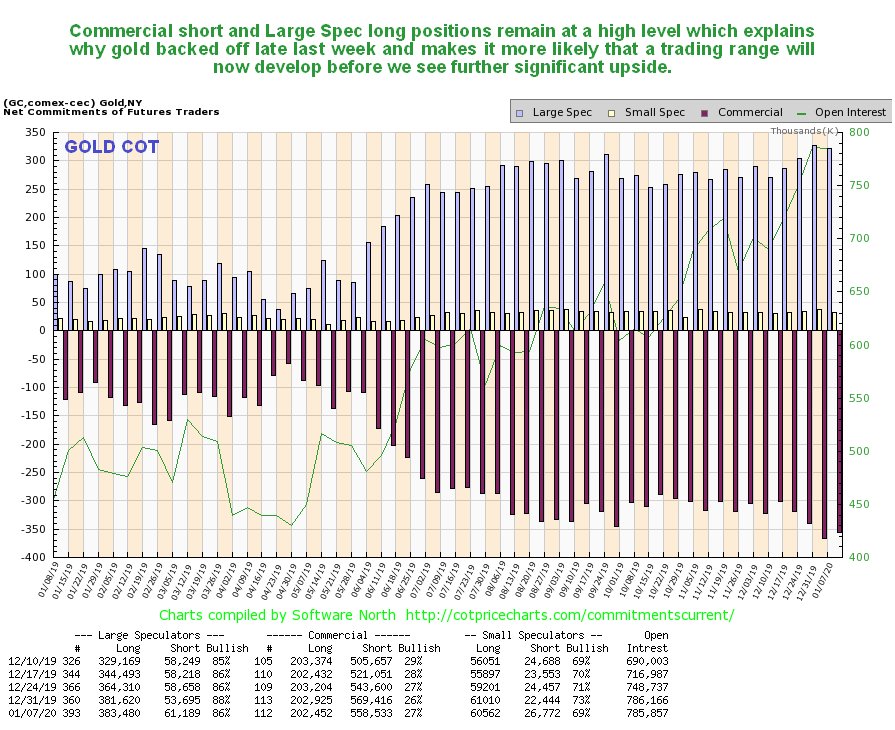 What about Precious Metals stocks? The latest 10-year chart for GDX shows that we still have most everything to look forward to, for despite the rally from the middle of last year, it still hasn’t broken out of the giant complex Head-and-Shoulders bottom that has been formed since way back early in 2013. A breakout above the nearby resistance should lead to a rapid ascent to the next resistance level at the underside of a large top pattern, and thereafter it will have to work its way through continuing resistance up to its highs. The strength of the volume indicators in the recent past are a sign that it “means business”. 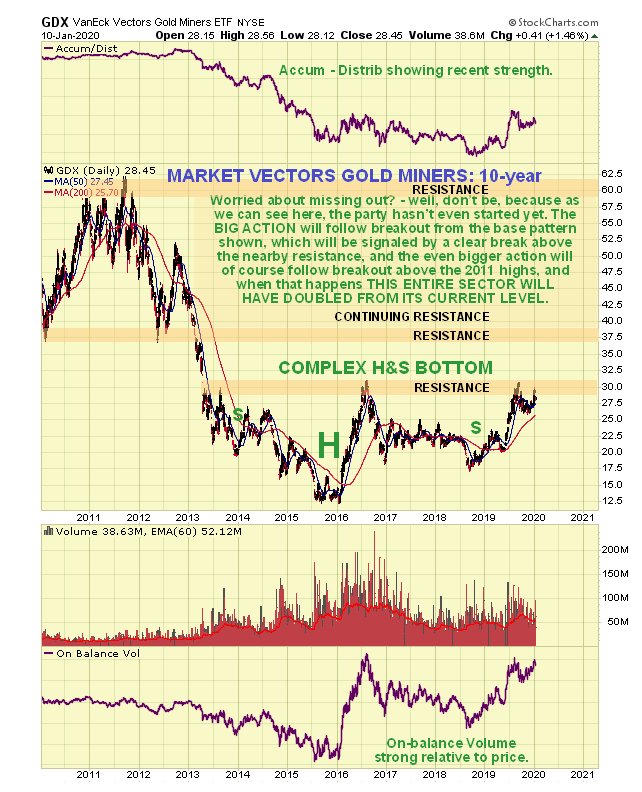 Now we turn our attention to the dollar, which is looking increasingly frail as we can see on the latest 6-year chart for the dollar index. It is rolling over beneath resistance and appears to be breaking down from the 16-month gentle uptrend shown. This is of course the main reason that gold, shown at the top of this chart, has been breaking higher again. If it fails to hold up here it could be targeting the lower boundary of the bullhorn pattern, which would involve a heavy drop from the current level that would “light a fire” under the Precious Metals, and many other commodities, notably copper. 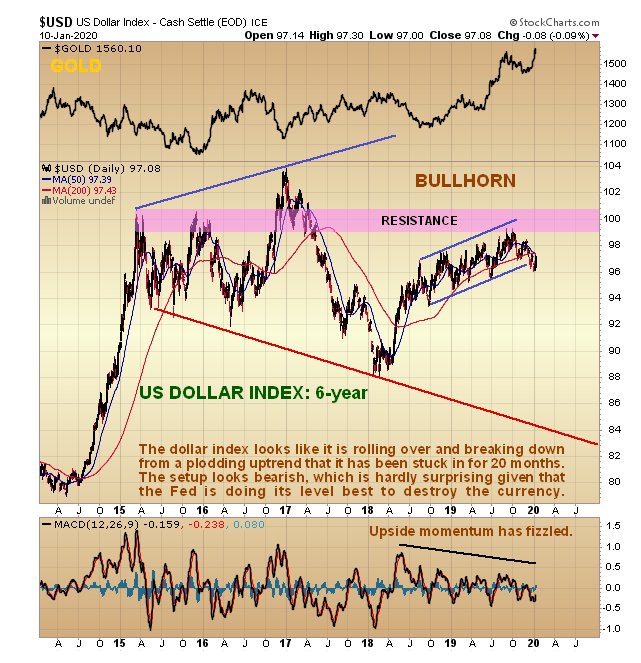 A chart that really gives the game away and calls time on the dollar is the 6-year chart for dollar proxy UUP. As we can see, unlike the dollar index itself, this has risen up to the upper boundary of its giant bullhorn pattern and appears to be on the point of breaking down. Its Accumulation line has been very weak. This chart suggests that the dollar could be in for a very rough ride before long, which is hardly surprising considering the lengths to which the Federal Reserve is going to destroy it. While other countries and trading blocs, most notably the EU, are making a valiant attempt to destroy their own currencies, they will be hard put to keep up with the Fed. 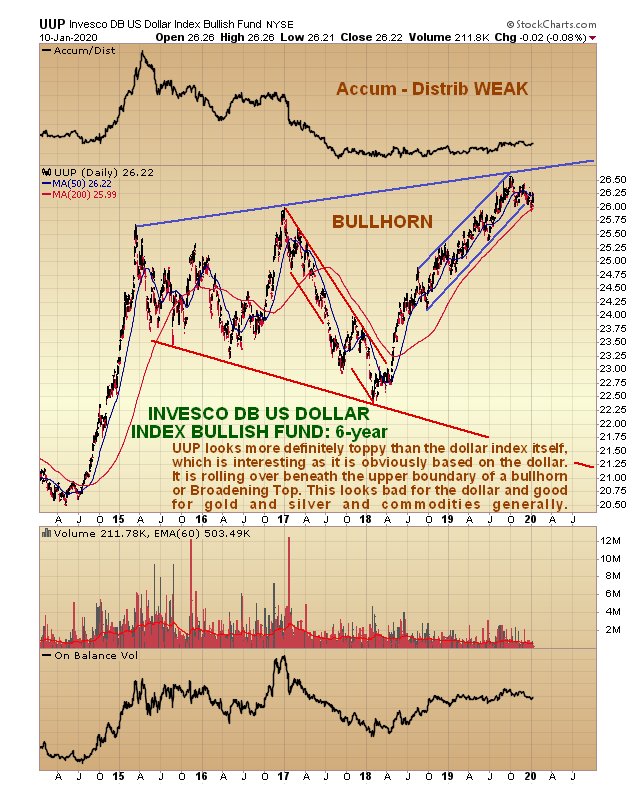 And now, for the benefit of anyone who still doubts that gold is in a bullmarket, I have pleasure in presenting the following 6-year chart for gold against the Japanese Yen… 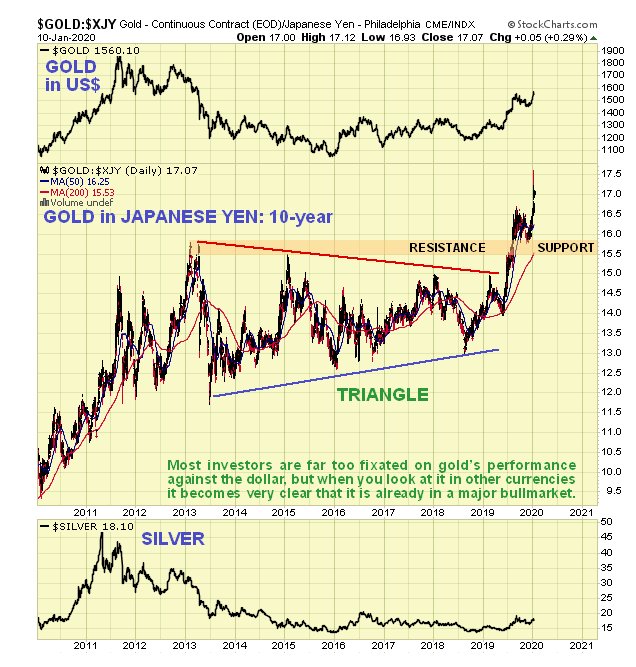 Still think gold might be in bearmarket? – no – didn’t think you would.

It’s always good to end on a positive note, and we’ll do so by looking at a stock with a supremely bullish setup, which we happened to buy right before it broke out about a week ago, and it may well have been our buying that triggered the breakout… 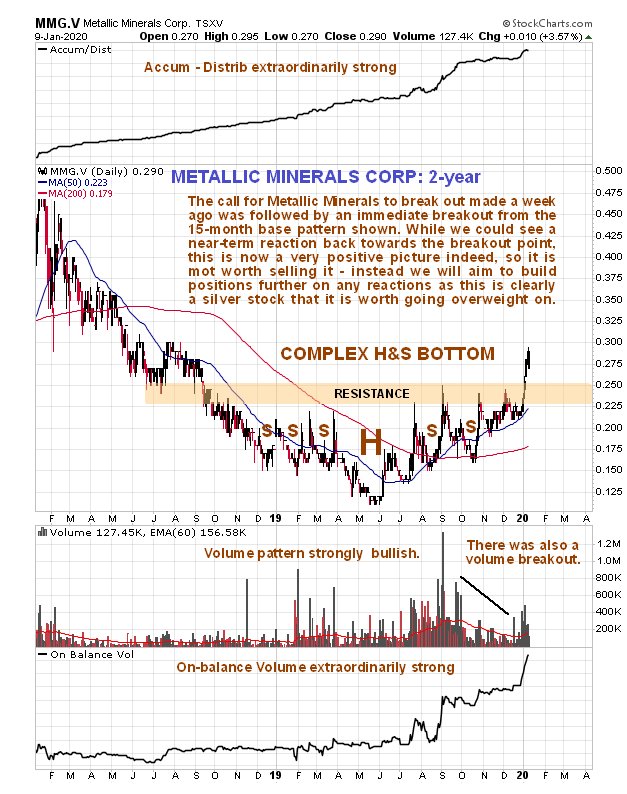 Although you can never be 100% sure of anything with these smaller issues, I am sure that you will agree with me that this chart is not suggestive of a sector that is going anywhere but up.

Conclusion: although last week’s reversal candle and the current rather extreme COT structure mean that gold may react back more near-term, the overall picture is strongly bullish, which is hardly surprising as the fiat money system is fast approaching its nemesis, with the line of least resistance leading to hyperinflation. Our general approach therefore is not to sell PM sector investments, except on a case by case basis where they become critically overbought, but instead buy or add to positions on dips.

Difficulties still not behind us - McEwen

Where are the stops? Thursday, August 6, gold and silver