2-rho Divergence© is a technique for developing powerful market indicators. The inputs are market variables that share a historical correlative relationship; the output monitors the divergence of those relationships as they deteriorate in distressed markets. The magnitude of a 2-rho Divergence Indicator© (d) is a number between zero and twice the square root of two (0<d<2.82). Typically, a low number affirms expectations based on past history, mid-range values signal impending departures from the norm, and a measure greater than 1.95 is a red flag of extreme divergence. Importantly, a peak in extreme divergence can signal a return to more normal conditions and anticipate reversals of related market variables from their tops or bottoms.

I recently developed an indicator to track progress of the U.S/China trade negotiations from a market perspective. It serves as a good example of the 2-rho Technique© and should anticipate future market disruptions if negotiations unravel in the transition from Phase I to Phase II. The China 2-rho Divergence Indicator© has three China-sensitive inputs: copper price, gold price and the Chinese yuan. China has led copper demand for years. Even as the Chinese move toward a more service-based economy less dependent on industrial metals, copper remains an important global benchmark. China produces and consumes the most gold in the world and its citizens consider the yellow meatal an important store-of-wealth. Finally, although tightly controlled by the People’s Bank of China, the yuan has a market component and is a bellwether of their economy.

Figure 1 shows copper, gold and yuan over a five-year period through Friday’s closing prices. Figure 1a plots Comex copper and the yuan demonstrating a rough positive correlation for the two (in this example, the yuan is expressed as CNYUSD so an increasing value denotes currency strength; a decrease, weakness). Figure 1b is a graph of Comex copper and Comex gold. Close inspection shows periods of both positive and negative correlation, the latter case often associated with times of market stress (copper down, gold up) or exuberance (copper up, gold down). 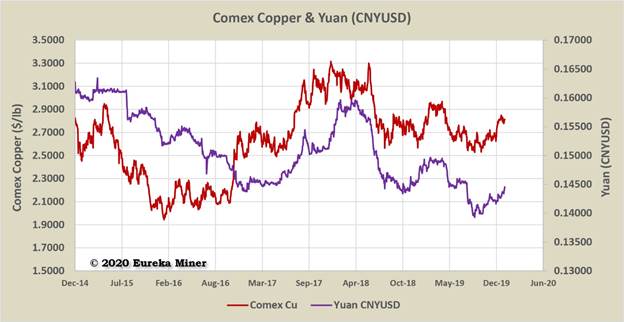 In this chart the Chinese yuan is expressed as CNYUSD, the inverse of the more usual USDCNY
Figure 1a 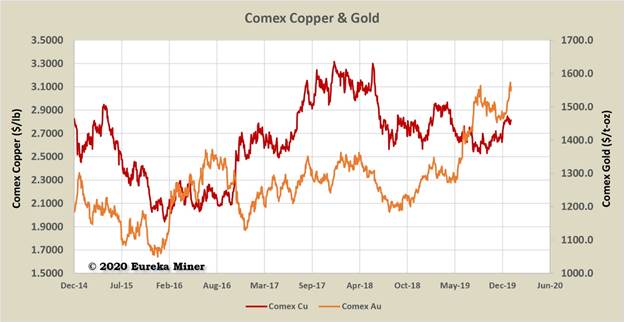 Statistics support these observations. Persistent positive correlations of copper and the yuan over 5 years occur 58% of the time; and negative, only 8%. A correlation is persistent when its short- and longer-term rolling correlations have the same sign – for this analysis, 1-month and 3-month time periods. By contrast, persistent correlations of copper and gold register 41%; and negative, 21%.
Accordingly, the China Indicator is a scalar, d, that measures how far apart these two sets of correlations come together or move apart. The greater the divergence, the greater the magnitude of d. Since correlations are bounded by +/- 1.0 the theoretically highest divergence in the correlation plane is twice the square root of two or 2.82.

Figure 2 is a 5-year plot of the China Indicator and three noted cases of extreme divergence (d>1.95).

The first case spans late-2014 and early-2015 when it appeared China’s economy was slowing much faster than expected. This market perception creates a “risk-off” sentiment causing copper prices to tumble, gold prices to rise and the yuan to weaken. As summarized in Table 1, Case 1 divergence peaks at 2.2465 January 30, 2015 coincident with a bottom in the copper-to-gold ratio (CGR). It leads by +2 market-days a peak in the yuan (USDCNY).

Jeffrey Gundlach, CEO of DoubleLine Capital LP (DoubleLine®), often mentions a stunning correlation between the CGR and the U.S. 10-year Treasury yield (Note 1 below). Table 1 shows that the Treasury yield bottomed +1 market-days after the divergence peak and CGR low suggesting a tantalizing link between the China indicator and U.S. interest rates under certain market conditions.

The second and third cases occurred this summer and early-fall as U.S/China trade tensions escalated. The first extreme occurs on August 23 as President Trump threatens in a tweet to further increase tariffs on Chinese imports and demands some companies cut ties with China. The Chinese respond with a threat of retaliatory tariffs on additional U.S. products. The China divergence indicator peaks at 2.0144.

Similar to the 2015 case, a “risk-off” caution drives Case 2 demand for U.S. Treasurys and gold. Bond and gold prices rise as copper prices fall. Accordingly, the CGR declines with yields (which are inversely proportional to price) reinforcing positive correlation between the two. Table 1 shows the CGR bottoms + 2 days after the August peak followed by the weakening of the yuan to 7.179 USDCNY and a Treasury low of 1.43% for the year, both +6 market-days from the peak.

Some of the boil comes off the August tit-for-tat as optimism for a two-part trade deal emerges but tensions return in mid-September building to a second divergence peak of 2.2080 on September 24 (Case 3). After strengthening some from its Case 2-level, the yuan weakens again to 7.146 coincident with the divergence peak. The peak leads a low for the CGR by +7 market-days; and yields, by +10.

As signing of the Phase I deal approaches this week, the China Indicator plunged to a tranquil 0.3 by Friday’s close. It is noteworthy that the China Indicator was relatively insensitive to the recent U.S./Iran dust-up in the Middle East. Although gold rallied in safe-haven mode after the death of Qassam Soleimani, copper trading remained at currency-like stability and the yuan barely budged (1-month volatilities 0.64% and 0.43% respectively).

The 2-rho Technique© constructs indicators based on two sets of historical correlations. Each set contains correlations of two market variables over two time periods. Departures from the norm offer insight into prevailing market conditions. Extreme departures or divergence often provide leading indication of key market reversals from their tops and bottoms and thereby herald a trend to normalcy.

Over the last five years, extreme divergence of the China 2-rho Divergence Indicator© flags three periods of market stress followed by yuan peaks, copper-to-gold ratio lows and, by extension of the Gundlach relationship, 10-year Treasury yield bottoms. Clearly, other market forces decoupled from the Chinese economy can lead to similar market events – U.S. monetary policy is a good example. However, January demonstrates that the China Indicator has good discrimination as it is relatively unperturbed by the unfolding drama in the Middle East.

I intend to write future commentaries to track both the China and Gundlach coper-gold indicator as we continue down the long path of future U.S./China negotiations. So far, so good.

Note 1: DoubleLine® documented this relationship in a comprehensive report (“The Power of Copper-Gold: A Leading Indicator for the 10-year Treasury Yield,” Jeffrey Mayberry, DoubleLine® Funds). I have also written extensively about this topic since 2017 (summarized in my December 23rd Kitco commentary, Is Jeffrey Gundlach right about copper, gold & interest rates?).