We could see gold move higher, but the correction is still active

Gold prices recovered modestly gaining six dollars on the day, with February futures currently fixed at $1562.70. The last three trading days can be characterized as a series of lower lows. However, gold continues to trade below the current resistance level of $1566 per ounce. This resistance level is created from a price top that occurred when gold traded to its highest value last year.

That being said I still believe that we are currently in a corrective phase which began immediately following the high of $1613 which was achieved during the height of the conflict between the United States and Iran. From that high market forces moved gold pricing lower until achieving a low at $1536 per ounce. Our technical studies indicate that this could possibly be the first of three corrective waves (A, B, C).

The study also indicates that we are currently in a counter wave found within the correction, label as wave “B”. Technical models created from Elliott wave look for this counter wave to take gold prices higher, and conclude at a price that is between 50% and 75% of the recent move lower. That would indicate that this current counter wave could trade between $1576 and $1595 before the “B” wave concludes and enters the final “C” wave. 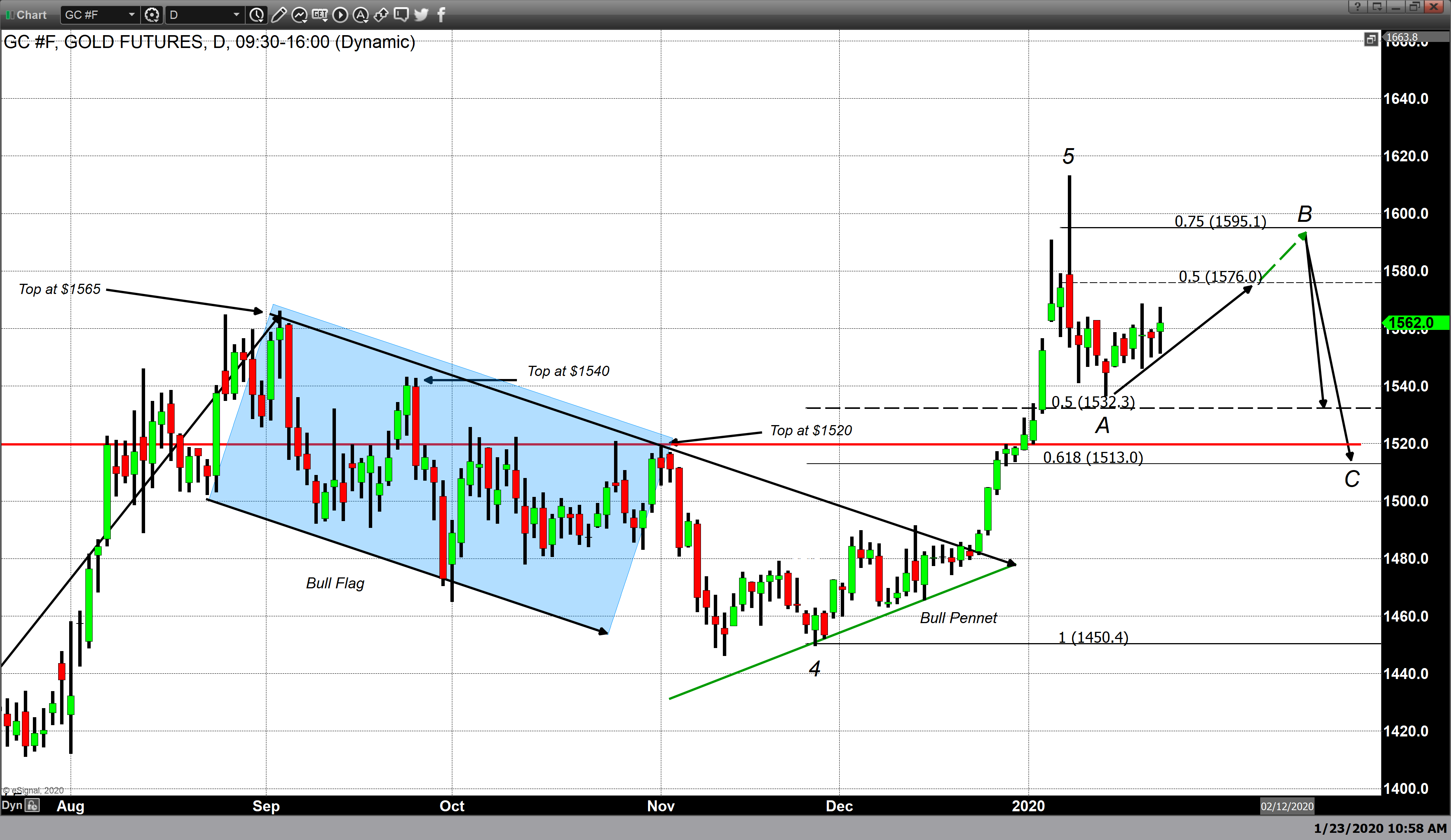 This correction would then have one last price drop, the “C’ wave, which would mark the conclusion of the correction. It could take gold pricing to either $1531, the 50% retracement of wave five, or the 61.8% Fibonacci retracement which occurs at $1512.

Of course, this model is the most simplistic type of Elliott wave correction, and more data is needed to confirm that this is how this correction will unfold and conclude.

Fundamentally gold has found some tentative support as a safe haven alternative to the current spread in Asia of the coronavirus. This is created a risk-off market sentiment with traders and investors in Asia and has pressured the global stock markets. Reciprocally it has increased demand for the safe-haven asset; gold.

This sentiment is also been expressed by Lukeman Otunuga, senior research analyst at FXTM when he said, “Appetite towards the precious metal should remain supported by growing fears over the coronavirus outbreak in China. The general uncertainty is likely to accelerate the flight to safety with gold seen testing $1568 in the short term, but if $1,555 proves to be an unreliable support level, prices could slip back towards $1,545.”

Although we have seen gold prices rise substantially above the lows achieved on January 14 ($1536), it seems unlikely that gold will trade above $1600 until this correction concludes. However, following the conclusion of this correction we would expect gold to return to its bullish demeanor and challenge the recent high at $1613 per ounce.