Rhodium prices have spiked. It’s now the top-performing metal of the decade, and speculators are excited.

Since I—quite frankly—missed the boat on palladium in 2019, this makes it worth considering.

But before we get into this, I have to say up front that I’m not a rhodium expert.

I could read a bunch of articles like this one on Bloomberg, and then write one of my own with lots of authoritative-sounding facts and figures. But the reality is that it would be entirely dependent on the soundness of reporting by journalists.

My intention in this article is to stick to what I can see for myself and go from there.

Let’s start with what is known; rhodium has risen more than tenfold since its 2016 lows. 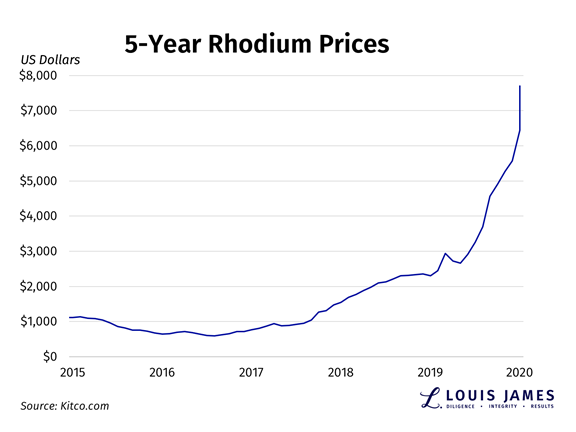 Most people know that rhodium is used to plate white gold jewelry to make it look whiter. But it’s clearly not jewelry demand that’s in the driver’s seat here. Rhodium is also used in catalytic converters to control pollution from gas and diesel motors, like platinum and palladium. Much less of it is used, but it’s clearly hard to replace for those who do use it. All reports say this demand, coupled with supply constraints in South Africa—which produces 80% of the stuff—are what’s sent prices vertical.

That’s possible both because of the limited sources of the metal as well as the tiny size of the market—only about a million ounces per year. That’s great for rhodium speculators, but these same factors make the metal prone to falling off cliffs. There are so few sources of rhodium, one big new mine can radically alter the balance of supply and demand.

We’ve seen this before… 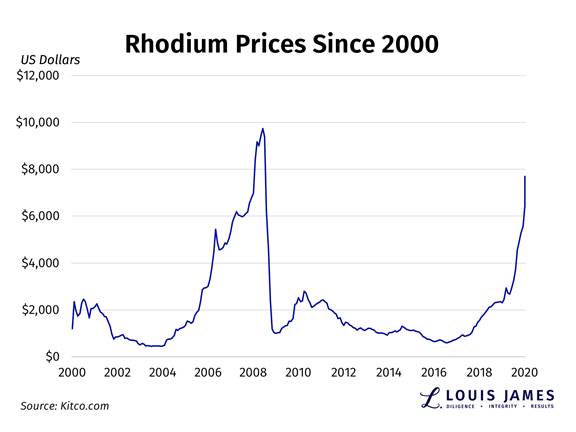 Several important considerations stand out on this chart.

The most obvious and alarming point is that nearly vertical cliff rhodium prices fell from in 2008. Clearly, getting out late is a huge risk in this space. At some point, someone’s going to be the “greater fool” who top-ticks this market. I don’t want it to be me.

On the other paw, previous rhodium peaks lasted years. That suggests that this one has maybe another year to go. Maybe two. If that’s right, those who buy today shouldn’t end up being the greater fools who provide exits for those who bought in earlier.

If I had play money and didn’t care about my public track record, I might have a go.

Unfortunately, while I’m still building up my new track record, I can’t afford to buy in to something I don’t understand well enough on my own. That would be gambling, not disciplined speculation.

I have no plans to go long rhodium at this time.

For those who do want to step up to the rhodium roulette wheel, however, there’s an easy way to play. But it’s not buying any mining stocks.

The metal is produced largely as a byproduct of platinum and palladium mines, so you could buy a big South African producer like Amplats (AMS.JO). Rhodium is a relatively small part of such stories, however, so the benefits of higher rhodium prices would be diluted. And you’d be exposed to political risk in South Africa—or Russia, if you went with Norilsk.

Kitco to the rescue.

No, they didn’t pay me to say that. But they do offer a convenient way to speculate on rhodium, offering both rhodium bullion bars and pool accounts.

Neither of these offers the leverage of a junior mining stock, of course. But if the metal itself might double, who needs all the risk associated with exploration—or even production?

Personally, since rhodium can’t be called a monetary metal or a safe-haven asset, I see no point in owning bullion. Few people in the world could distinguish it from any other silvery metal. It’d be pretty hard to liquidate in case of emergency.

If I wanted to gamble with some play money—money I could honestly laugh off losing—I might skip the trip to Vegas and buy into a rhodium pool account.

To be kept abreast of opportunities and issues affecting resource speculators, please sign up for our free, no spam weekly Speculator’s Digest.