Wisdom wins with gold and silver

A mere week has passed since we penned "Gold Looking Lower Near-Term" such that we instead find its price +0.9% higher in settling yesterday at 1571, Friday's low-to-high run alone being +1.3%. That stated, must we nix our near-term notion for lower Gold? No, given our nestling in with the negative fallout of our favoured "Baby Blues" as we again go straightaway to their current stance, (or at present, inability to stand):

And you regular readers know the drill, the above two-panel chart showing us the daily bars from three months ago-to-date for Gold on the left and Silver on the right. The blue dots of trend consistency in both cases having peaked above their respective +80% axes -- and now being in free fall -- is a proven, traditional, technical harbinger for price to succumb to at least recent prior structural support as denoted in red for Gold at 1521 and for Silver at 17.42. 'Course as we disclaimingly asserted a week ago, such prognostication comes to fruition a majority of the time: there is the odd exception. Moreover as we're seeking Gold 1675 during this year, we'd initially view any near-term pullback as but a pause by which to refresh, (barring Gold's more broadly falling out of favour for whatever Short's-concocted, bits**t-biased, unsubstantiated excuse up with which they'd come).

Speaking of "up", notably have an above glance at Silver's rightmost bar: that low-to-high +2.3% run on Friday was a loaded leverage payday for the likes of miners such as Pan American Silver (PAAS) which from its intra-day low of 22.12 went on a +5.3% run up to 23.30; a tip of the cap for that to a valued reader and their "sell into strength" trading wisdom. "Double your pleasure with doublesprint stocks!" Or if you prefer hitting triples, Silver itself for the week (low-to-high) gained +3.2%: said stock +11.4%. (Further still from the esoteric futures pit, the week's low-to-high gain on Silver's "initial margin requirement" was +46.7% --- "What's in yer algorithm?" Not.)

Through it all from the "Gold Plays No Currency Favourites Dept." have you been tracking the Dollar? From its Index settle three weeks ago (03 January), the brash buck is +1.1%; Gold's net change for the like period? +1.0%. Both are up:

Or from just a week ago, the Dollar is +0.3% and Gold (as noted) is +0.9%. Again, both are up. But, oh-no, the stock market as measured by the S&P 500 just recorded its second weakest down week since that ending 22 November. Dollar up; Gold up; S&P 500 down. Poor bedside manner perhaps, but is there a "virus" in the air? Sadly so, the Corona, don't you know. Yet once under control watch for market reversals to unfold.

Nowhere near reversing (any near-term weakness notwithstanding) is Gold's parabolic Long trend per the weekly bars. As we next see here, the upside path is now five weeks in duration and there's nearly 100 points of downside room with which to work before flipping the stance to Short. Yet as well as Silver seems to be doing, her ratio with Gold nonetheless remains near all-time highs at 86.7x:

On to the Economic Barometer "Swiss-Style". With the past week being largely focused on the hoity-toity heights of Davos bringing us the usual bloviating from the well-intended aristocratic experts toward economically saving the planet, we noted that the Econ Baro graphic in this year-over-year view has taken on (rather accurately) the very geographic appearance of our beloved Switzerland itself. And from Basel's banking gnomes to Davos' economic elite, what is ultimately in the balance for us common sense individuals, eh? May Gold shield us from whatever snow-jobs blow our way. Here's the graphic:

Specific to the S&P 500 with Q4 Earnings Season picking up its pace of incoming reports, 68 of the mighty Index's constituent results thus far find 71% of them "beating estimates" ... but only 63% actually improving their bottom lines. And the average year-over-year EPS change? +8.5%. That ain't gonna do much to alleviate our stratospherically-high "live" price/earnings ratio of 40.4x. And as for yesterday's -0.9% market drop -- the S&P's worst for one day since 08 October (-1.6%) -- the moneyflow associated with the selling was sufficiently thin that once the "virus" wanes from the headlines' stack we "ought" see stocks back on an upside track -- unless this time their top truly is in place ... a Gold-saving grace.

Gliding up through their respective 10-day Market Profiles have been the precious metals' prices. Here they are for Gold (below left) and Silver (below right) with their most intensively-traded levels as labeled:

So there we have it, and there's a lot of it. 'Tis the near-term technical suggestion for lower Gold (per our declining "Baby Blues") countered by a Coronavirus instead kicking down stocks (already horribly over-valued in their own right). 'Tis Q4 Earnings Season (one nowhere supportive of present price levels). 'Tis January (and all the new year's positioning that comes with it). 'Tis another nudge forward of the Doomsday Clock (to it all going backward). 'Tis Impeachment (the latest soap opera sleep-aid). And ... (wait for it) ... 'Tis the Fed! That's right: perhaps lost in the midst of all these "Tis" comes this next Tuesday/Wednesday gathering of the Federal Open Market Committee, whereby in sticking to that which they've already said, they'll merely sit 'round toward doing nothing. Kinda Davos-esque, non? Just don't say no to Gold nor Silver as any near-term pullback, by wisdom, ought yield higher comeback! 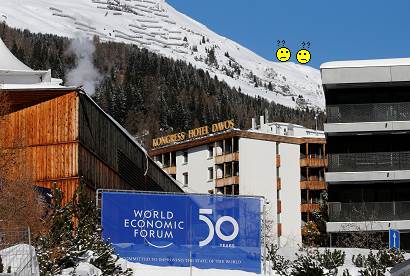