Dovish central banks and concerns about the coronavirus support gold

As we saw yesterday, gold prices are trading moderately higher, even with a stronger U.S. dollar. Currently the most active April contract is up $7.60 (+.49%), and fixed at $1570.40. We have seen gold move moderately higher now for the second consecutive day, despite the dollar index currently up 2/10 of a percent and fixed at 98.355. 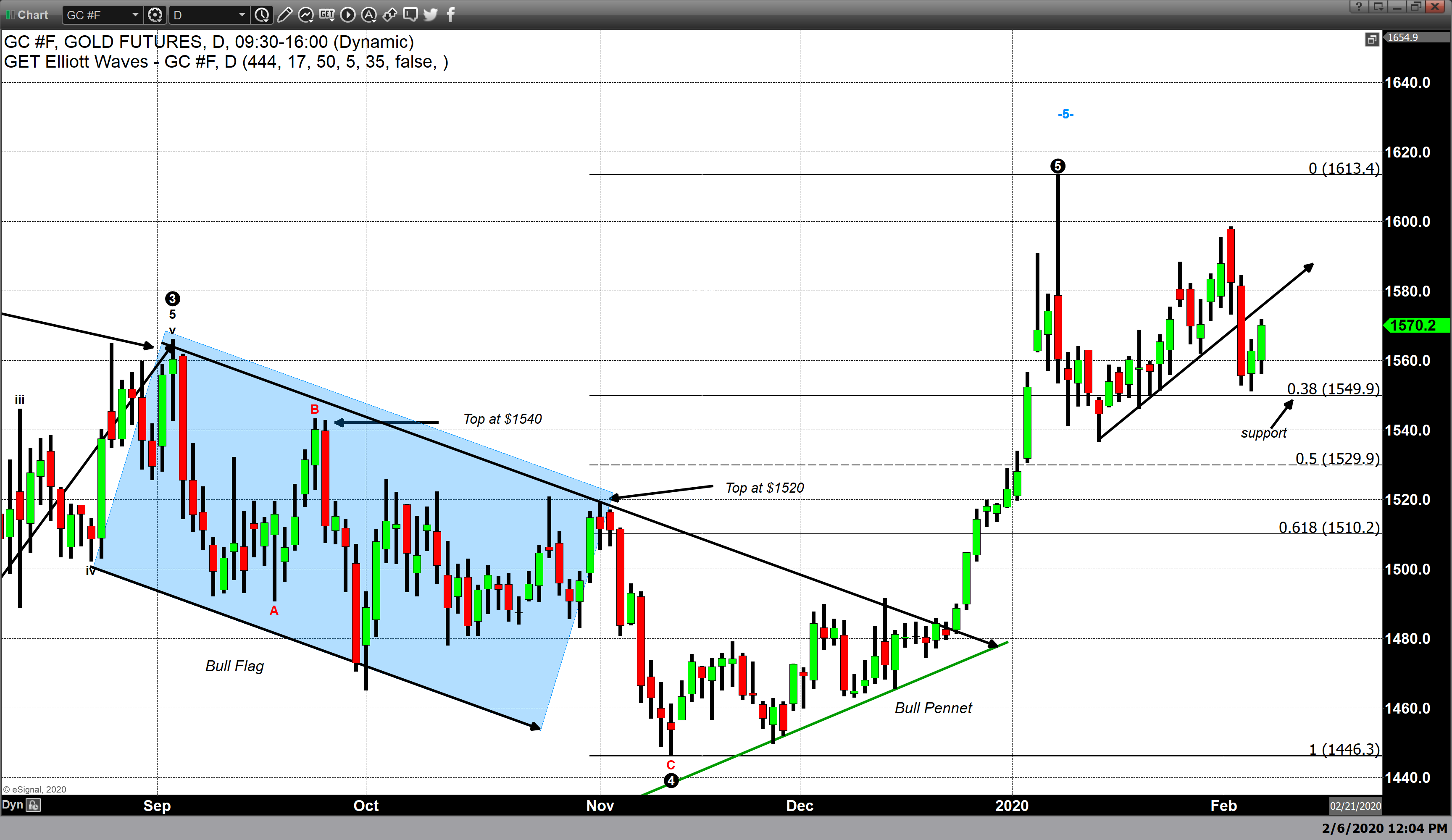 The precious metals complex is a mixed bag in terms of price changes today, with gold and silver trading higher, but platinum and palladium trading lower on the day. The largest percentage decline is in palladium futures, currently down 4.16%, which is a net decline of $96.80 taking current palladium pricing to $2229.90. Platinum is the second in line in terms of percentage drawdown losing 2.1% today. After factoring in today’s decline of $20.70 platinum is fixed at $966.40.

This is once again occurring as U.S. equities continue to move to higher ground and the 11-Year Rally seems to be still fully in play. The Dow Jones industrial average is currently at 29,379.77, after today’s gain of 3/10 of a percent, or 88.92 points. The NASDAQ composite gained 7/10 of a percent while the S&P 500 ended today gaining 0.33%.

One possible explanation as to why we are seeing gold and silver rise along with U.S. equities is the underlying fundamentals consisting of two major components. The first of which is the monetary policy of the majority of central banks worldwide. The Federal Reserve continues to purchase $60 billion worth of assets on a monthly basis, as it continues to maintain a policy of keeping their “fed funds” interest rate at their current level. The European Central Bank along with the Bank of Japan have also been aggressive an extremely accommodative in terms of providing liquidity and low interest rates. Then there is the People’s Bank of China which infused a tremendous amount of capital on Monday and Tuesday this week to help stabilize falling equities prices in China due to the second major component, the ever-spreading coronavirus.

According to CNN the coronavirus outbreak has killed more than 560 people and infected over 28,000, with the vast majority of reported cases occurring in China. More alarming is the fact that currently there are 60 million people in China that continue to remain under lockdown. As of today, the virus has spread to over 25 countries and territories. Currently there are more than 250 people that have been affected outside of China, with a death toll of two.

Currently the United States is chartering planes to bring its citizens out of China, and placed them in quarantine once they arrive on U.S. soil.

“Several more U.S. government-chartered evacuation flights were expected to depart Wuhan on Thursday, a day after two planes carrying about 350 people arrived in California. All those passengers will spend up to two weeks under quarantine while they are monitored for symptoms of the virus.”

The Defense Department announced that it expects to add 11 additional military housing locations that have been approved to accept people for quarantine if health authorities believe they are needed.

One of the biggest challenges in containing the outbreak is the fact that it appears that it is possible for the virus to be transmitted by infected individuals or not showing any symptoms at all.

The World Health Organization has declared a global health emergency over the deadly new strain of virus. Chinese officials have blocked all transportation in and out of the city of Wuhan and surrounding areas.

According to the CDC an epidemic refers to a constant presence or unusual prevalence of the disease in a population within a geographic area. Whereas a pandemic refers to an epidemic that has spread over several countries or continents usually affecting a large number of people. Based on the definition used by the CDC and the current speed at which the virus is spreading we could easily see this epidemic become a fully blown pandemic before a vaccine is formulated. The repercussions would spread far and wide one of which would be a negative affect on the global economy, nonetheless the globe and all we hold dear.

Collectively the dubious duo of the extremely accommodative monetary policy of central banks worldwide and the real potential for the coronavirus to move from an epidemic to a pandemic could be very bullish for gold.

For those who would like more information, simply use this link