People who think that gold is underperforming are missing the forest for staring at one tree. Sure, gold is priced in US dollars, in which it’s still recovering. At over $1,600 per ounce in USD, that’s hardly a shabby performance over the last year. But it’s important to look at the bigger picture here. Gold just hit new all-time highs in euros, British pounds, Canadian dollars, Australian dollars, Japanese yen, Russian rubles, and other major currencies.

Last June, I reminded readers of the importance of looking at gold in other currencies. In that article, I published this chart of gold prices in multiple currencies… 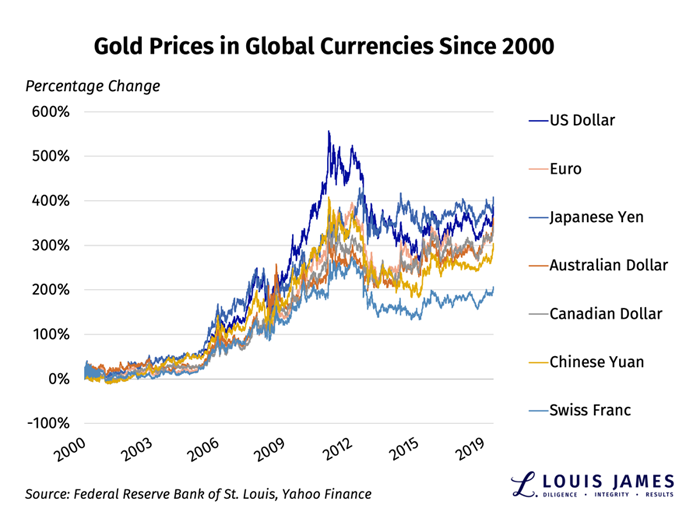 My point then was that gold price trends had turned upward all around the world. (I also took a deeper look at gold as a hedge against inflation— if you missed that article, it’s got some more great charts, well worth a read.) Now look at the same chart today… 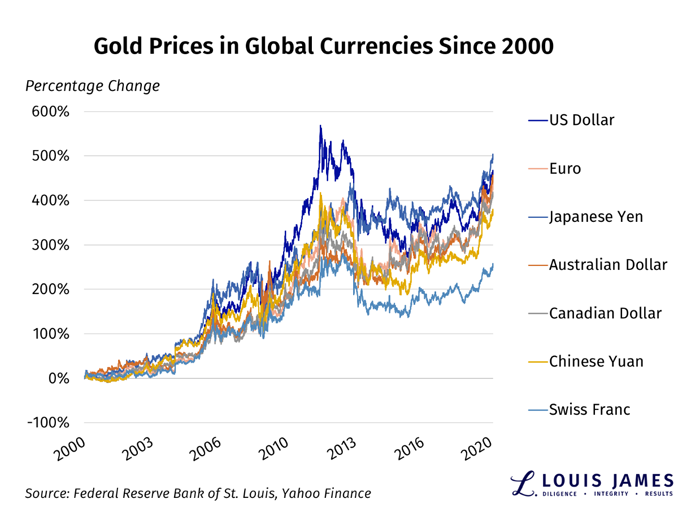 Gold is hitting new all-time highs around the world—and it’s not far from doing so in the US and China, where the yuan is still tied to the USD.

The difference is even more stark with the British pound added, and the dollar-pegged currencies removed, as you can see in this version of the chart. 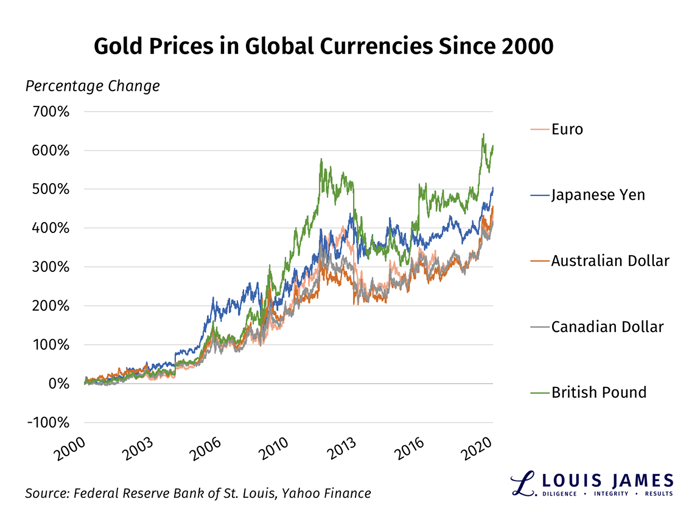 This is important. And that’s not just because the bullish trend for gold is global…

The bigger picture here is that gold—the world’s best economic fear barometer—is telling us that fear is on the rise all around the world.

I do think the COVID-19 outbreak is contributing to this, but that’s only recently and likely to be temporary. Even in the US, gold has been rising since late 2015. This now-accelerating multi-year rally is a profound indictment of government profligacy and desperate central bank action.

All is not well in Mudville, and people are waking up to that fact.

Given how important consumer confidence is to the modern, fiat-driven financial order, this has profound investment implications. If the confidence scheme central bankers have been propping up since the crash of 2008 collapses, the global economy will exit the eye of this gigantic storm, as my friend Doug Casey says. We may even see the Greater Depression he’s been predicting for many years. But even if not, there will be major dislocations and a great deal of economic fallout.

Could governments and their central-bank lapdogs kick the can down the road again with more easy money? Well, they are trying. That’s what gold is telling us.

The question is: how long can they keep the fiat currency charade going?

I don’t think anyone does.

But the global gold trend suggests a major breaking point is coming.

Until we know when—until we see real evidence that the party is over—I think it’s dangerous to short Wall Street or industrial minerals.

Until the danger passes—if it passes—I think it’s very risky to pile into Wall Street risk assets and industrial commodities.

And either way it plays out, it’s bullish for gold and silver.

My best idea for doing this is to invest in gold and silver companies entering the pre-production sweet spot (PPSS). I’ve just published a free report on the PPSS investment strategy available for download today.

But, a rising tide doesn’t lift all ships equally, so, as always…

P.S. To be kept abreast of opportunities and issues affecting resource speculators, please sign up for our free, no-spam, weekly Speculator’s Digest.