On Friday gold futures closed up in double digits with a net gain of over $20 on the day. This led to the only time we see gold prices gap extremely higher, or lower; the weekend. As gold reopened Monday morning in Australia it did so with a powerful upside move. After closing just above $1643 per ounce on Friday, gold prices opened at $1656 and then began a substantial, but short-lived rally, taking prices to $1691.70.

Obviously, this is the highest price gold has traded to this year. Even more significant though is the fact that you have to go back to February 2013 to see the last time gold had challenged $1700 an ounce, the current elusive brass ring. 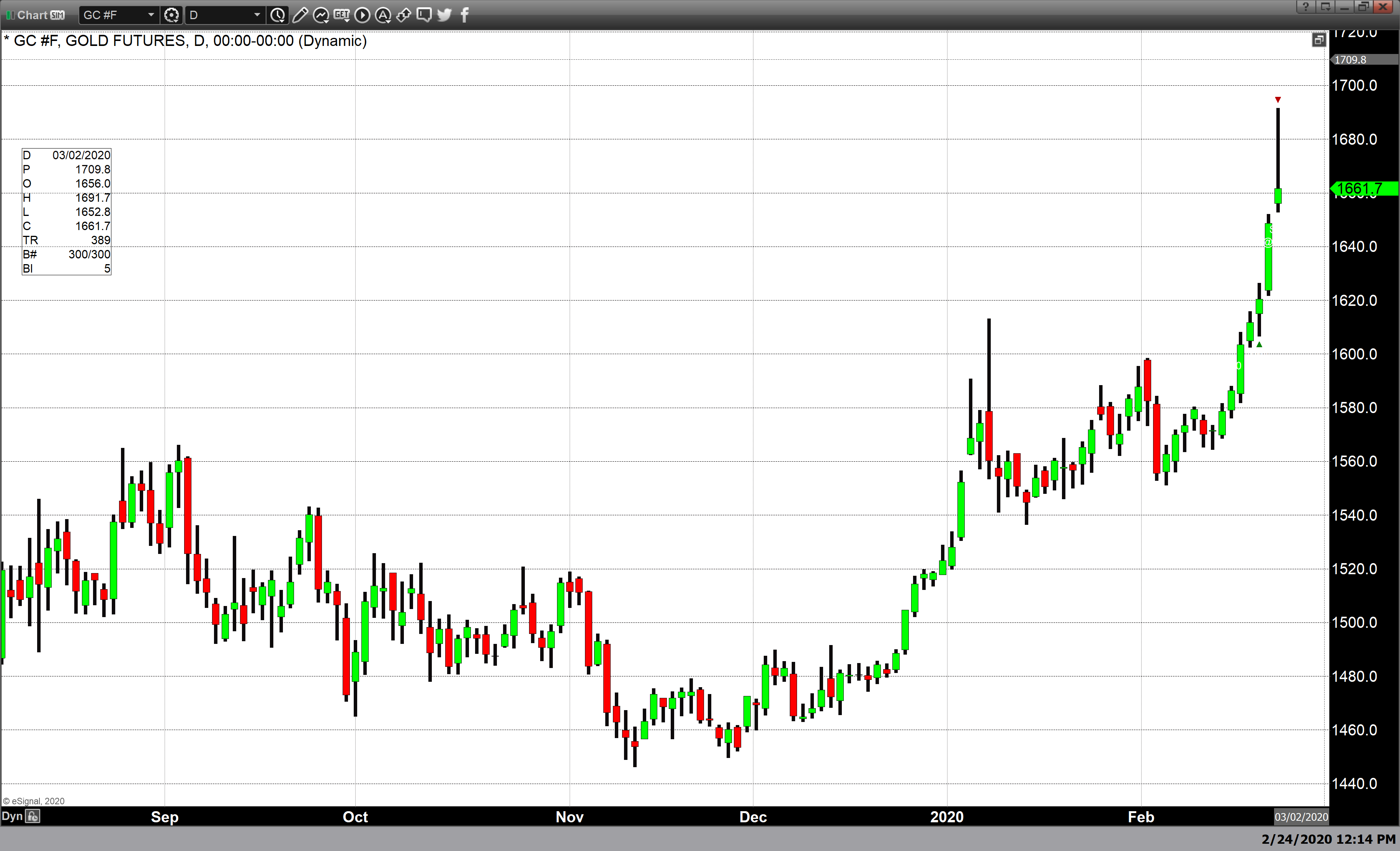 This spike occurred as the Dow Jones Industrial Average sold off sharply losing 1031.61 points and closing at 27,960.80. Essentially U.S. equities sustained losses greater than the gains achieved during 2020. On a technical basis the retracement of today’s move alone occurred at the 78% Fibonacci retracement level after the Dow gave up 3.56% of value today. 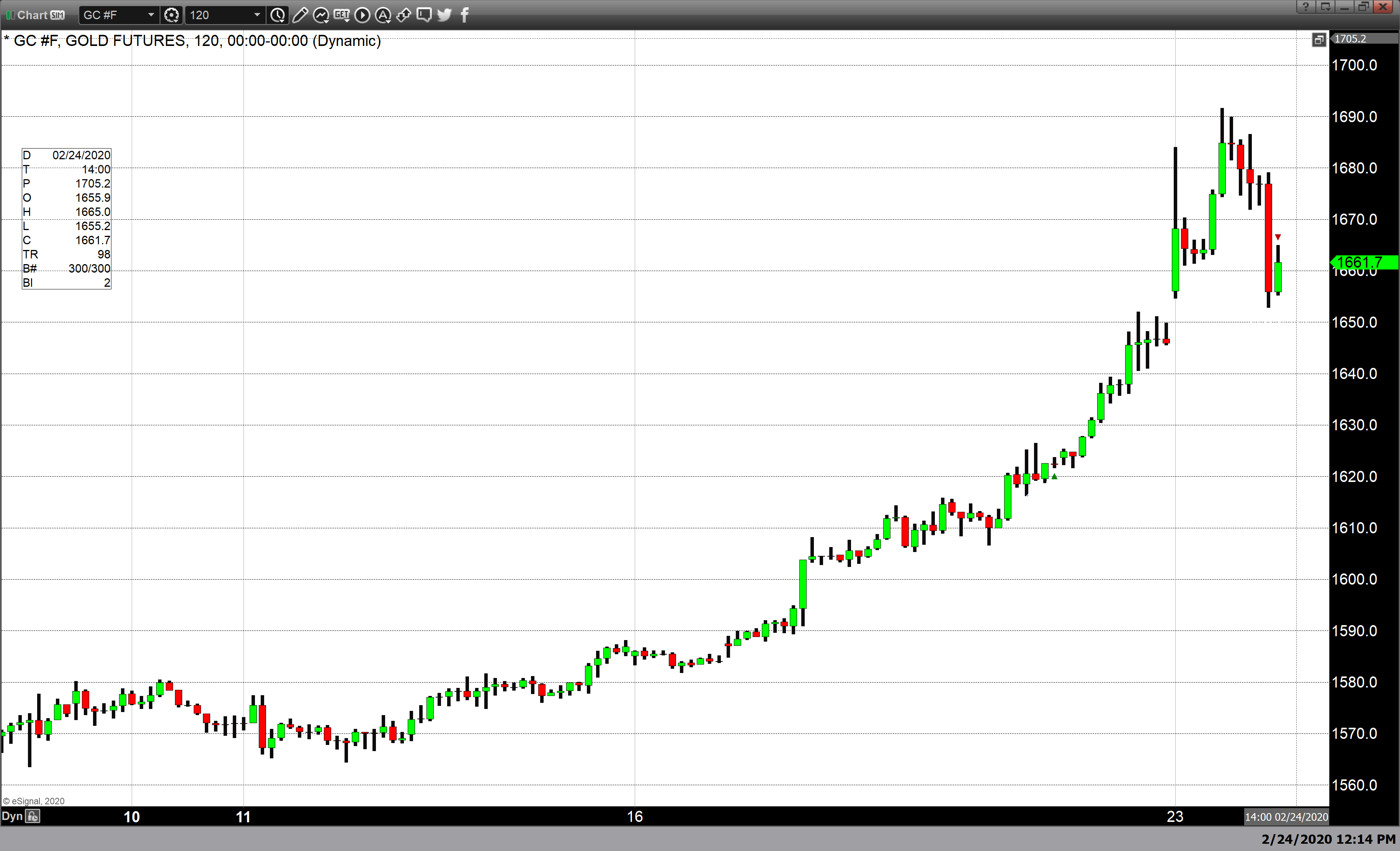 While the World Health Organization is currently acknowledging that the COVID -19 continues to spread to other countries, they are hesitant in relabeling this epidemic which occurred in China as a pandemic which would mean that it is spreading worldwide.

As reported in MarketWatch, “The World Health Organization (WHO) said Monday that the coronavirus that broke out in Wuhan, China, late last year is not a pandemic. WHO Director-General Dr. Tedros Adhanom Ghebreyesus said the virus, named COVID-19, is not spreading in an uncontained way. "What we are seeing are epidemics in different parts of the world," he told reporters on a conference call. The WHO said earlier there are now 79,407 cases of COVID-19 in 30 countries and 2,622 deaths. The rapid uptick in the number of COVID-19 cases in Iran, Italy, and South Korea over the weekend sent markets tumbling Monday over concerns that the outbreak would turn into a pandemic.”

However, there are those experts that gravely disagree with the forecast from the WHO. Today Yahoo! News reported that Harvard University epidemiologist Marc Lipsitch is predicting the coronavirus “will ultimately not be containable” and within a year, “will infect somewhere between 40 and 70 percent of humanity.”

Lipsitch does not believe the virus can be contained because it differs from viruses like SARS and MERS, in that infected individuals do not show symptoms for an extended period of time allowing them to infect others. In fact, according to the Atlantic epidemiologist Marc Lipsitch is not alone, and there is emerging consensus that the outbreak will eventually morph into a new seasonal disease which could one day turn the cold and flu season into the cold and flu and COVID-19 season.

If these predictions come into fruition, we could see an extended and major global impact on economic growth which would pressure global equities and be extremely bullish for the safe haven assets such as gold and bonds.

For those who would more information simply use this link.