The year's targeted forecast price for Gold of 1675 was reached this past Monday, 24 February; (as, with a wee bit of overshoot, was 1691). Then Gold's safe-haven status was breached, even in the face of the coronavirus' harrowing screech. What the hell happened?

Recall a week ago our cinématically referring to "'The Herd vs. Algore', starring Goldzilla. Man or machine? Someone's got to lose..."? And the loser is: the safe-haven seeking herd as the machine-driven algorithms saw to where price reached, their line of programming code then reading: "If 1675, then call subroutine 'sell like hell'". And down fell Gold. Even absent the coronavirus, the same thing would likely have happened upon price eventually having reached 1675. To wit:

The following chart as updated from a week ago is ambitious, but it starkly shows us why "Algore" kicked into selling overdrive, repelling "The Herd". And again 'tis why we selected 1675 (red line) as our forecast Gold high for this year. The graphic vividly illustrates the broadly congestive track of Gold for the year-and-a-half period from late September 2011 into February 2013, replete therein with all the messy "...fits n' starts n' support n' resistance..." 'Tis an area to which Gold hadn't returned until just this year, 2020's pricing thus far as portrayed by the overlay of hot pink daily bars. February's run-up by those bars ensued in tandem with the daily coronavirus news ... until price reached 1675 this past Monday ... from which 'twas "Game Over":

And how wonderful 'twould be for us Gold bulls that 1675 (actually 1691) turns out as not the year's high; to be able to wax poetically and pen "Ode to Being Wrong!" Obviously we've 10 likely chaotic months still to run, rife with political fun. So bring on central bank rate reductions, perhaps even some quantitative easing and governmental loosening of fiscal policy! All good for Gold, which by the Scoreboard's debasement ought already be priced at 3018! And all in good time. "Ode to Being Younger!"

'Tis very easy to categorized the coronavirus-induced market chaos as such, Squire. But to this point, we're not putting it into the "black swan" slot. Suwannee's last appearance back in 2008 lowered all of the BEGOS Markets boats: The Bond, the Euro, Gold, Oil and the S&P 500 all substantively suffered in the financial fallout. That is not the case this time as both the Bond and the Euro are the big beneficiaries; moreover, the fallout, rather than financial, is this time economic, (or shall be shown to so be over the ensuing months): supply chains are affected and commerce is slowing; but banks aren't failing and unworthy credits imploding. (At least not yet: and our guess is that this coronavirus strain shall in due course get corralled and we'll all move on to the next event).

As for this missive's next event, 'tis month-end and thus time to bring up (or some might say "down") the BEGOS Market Standings year-to-date. "Got Oil?" Cheaper pump prices ahead! 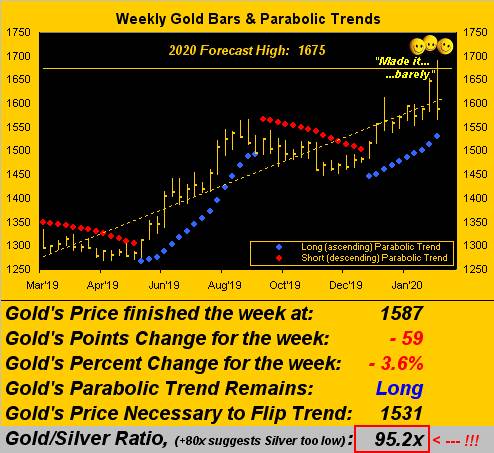 So from a year ago-to-date, the above Gold graphic remains fairly attractive with its upside bent. However when we bring in Gold along with several of the key leverage-lovin'-n'-dyin' precious metals equities, the picture rightmost is clearly more queasy. Therein we've Franco-Nevada (FNV) +41%, Pan American Silver (PAAS) +37%, Newmont (NEM) +34%, Gold itself +21%, the VanEck Vectors Gold Miners exchange-traded fund (GDX) +17%, Agnico Eagle Mines (AEM) +10% and the Global X Silver Miners exchange-traded fund (SIL) +2%. What a difference a month makes, (should you care to search back to "Silver Hits Downside Support; Gold Stays A Safe-Haven Port" from 01 February):

As for the sturdy StateSide Economic Barometer, any depths of decay from the coronavirus mêlée are still to display. But the forward-looking stock market did not delay, its long overdue "Uh-Ohhhh..." finally coming into play, courtesy of the coronavirus catalyst. And as has been herein stated ad nausea, 'tis the S&P 500 (red line) that ultimately moves to the graphed level of the Econ Baro (blue line), which happened at fierce speed this past week. The S&P from its All-Time High just recorded on 19 February at 3393 careened over the cliff to as low as 2856 yesterday, a -15.8% fallout within eight trading days. The last such pullback of same magnitude over the like time frame occurred on multiple occasions within October/November 2008 (leading to an overall -50% "correction") and prior to that as of 21 September 2001 (also leading to an overall -50% "correction").

So: is this the start of another -50% S&P "correction"? We don't think so, especially with interest rates this low. To be sure, our "live" price earnings ratio of the S&P is at present 37x, Q4 Earnings Season having been "ok" with 67% of the mighty Index's constituents improving their bottom lines, (meaning that 33% didn't). But in these days of algorithmic bargain-seeking mania -- again in what is essentially a zero interest rate environment -- the hunt for perceived "value" is alive and well. To wit: after stock trading closed on Friday, the S&P 500 futures rose 28 points in their own additional hour such that had the stock market still been open, 'twould have actually closed the entire day in the black by four S&P points. "Who knew?" 'Course, a lot can happen between now and Monday's open, but that was quite the post-close bullish move. Either way, here's the present state of the Baro and the S&P. "Uh-Ohhhh..." indeed:

To the precious metals' past three months-to-date we go, the daily bars on the left for Gold and those on the right for Silver. Not surprisingly given their rightmost spates of selling, the "Baby Blues" denoting linear regression trend consistency have just begun kinking lower. Quite the sudden Ugly Dog Contest, what? And the winner is: obvious Sister Silver. Some plunges are uglier than others, and hers is practically off-the-bottom-of-the-chart ugly! On Friday alone, the yellow metal from high-to-low was -5.3%; the white metal Friday from high-to-low was -8.3%, (pushing the bounds of the G/S ratio up to 95.2x). Poor ole Sister Silver! 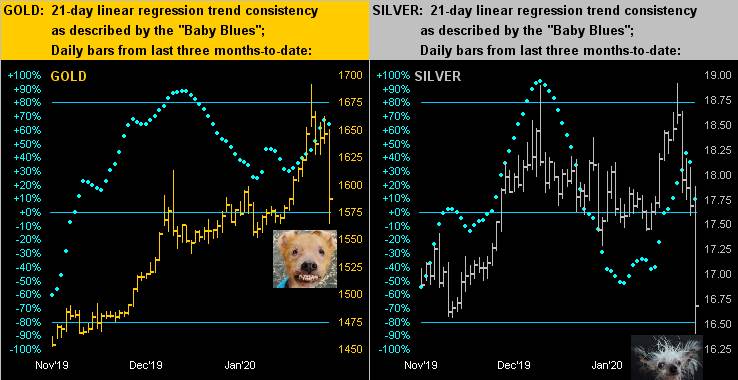 As for what is basically upside resistance, let's next turn to the 10-day Market Profiles for Gold (below left) and Silver (below right). To quote 007 from "Live and Let Die" --[Eon Productions,'73]: "...It used to be a convincing act ... It's wearing a little thin now ... Make your choice":

And the band played on.

Still, toward this week's wrap in maintaining a broadly bullish perspective for Gold, here we've its strata-defined structure by the monthly bars now across nearly a decade. "You've come a long way, baby." Just from December 2015's unthinkably oversold Gold low of 1047, price this past week overshot our 1675 forecast in hitting 1691, a +61.5% journey. 'Tis climbed from "hell", up through The Basement ("sous-sol"), onto "The Floor", and back to being "on maneuvers". Yeah, the brief overshoot to 1691 notwithstanding, we might be essentially correct only two months into 2020 about 1675 being the year's high. But as for the dude at lower right, he can offer his patronizing accolades elsewhere: 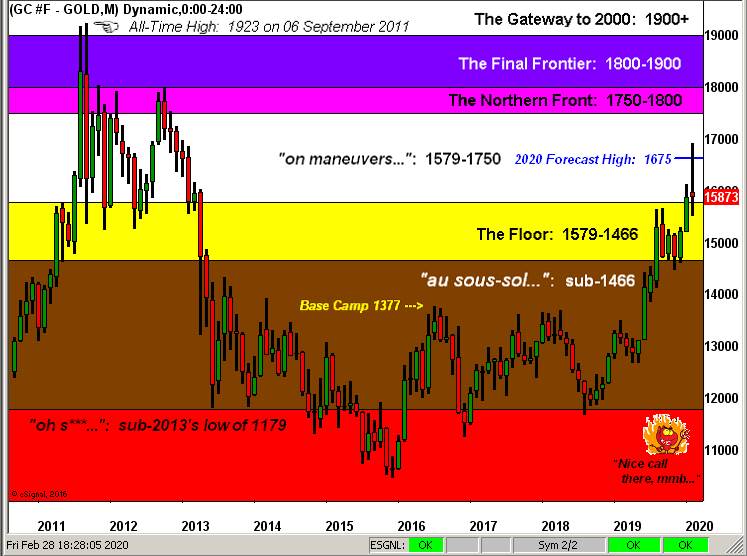 The bottom line: is Gold's high in place for the balance of the year? To quote the Mighty Moriarty, "Nobody Knows Anything." As depicted technically in the overlay graphic near the top of this missive, Gold rose "to where it ought" and then turned tail downside with exquisite precision, the algorithms seeing it way ahead of The Herd despite its corona-crying-out for higher prices still. Gold did what markets do: it swiftly smashed upward into that area of massive structural congestion and fell down hard. But inevitably, The Herd will out, because it has Heart, Common Sense, and Time to see Gold's price through to 2000, and far beyond! 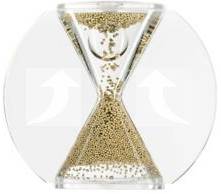