There's something about the Gold price of 1691. Oh to be sure, 'tis 16 points above our forecast high for this year of 1675, a level which according to the "Coronavirus? Who Knew? Dept." may in hindsight appear -- as we suggested back on 04 January before anyone knew of said virus -- conservative. Then, Gold was "just" 1555, after having been as low as 1268 in "just" in May of last year. A pretty darn good run, that. And yet most broadly, the above Scoreboard's present "debasement" value of 3018 ought one day be seen.

But as for "The Now", Gold just settled out this past week yesterday (Friday) at 1674, and in so doing en route gave us the same pop and the same top where price had just gone in the week prior. Let's review:

¦ On 24 February as economic uncertainties spread in concert with the coronavirus, the price of Gold zoomed right up through our 1675 forecast to 1691 (1691.7 to be precise) only to then be pummeled over the ensuing four trading days down to as low as 1564. Ouch!

Why did this happen again? Again let's bring up the overlay chart as presented a week ago, now updated through this past week. As an overlay upon Gold's trading range from September 2011 into February 2013 are Gold's daily bars in pink for this year to date. The 1650-1700 banded range of trading congestion contains our centered forecast selection of 1675 (red line) for this year's high; and the two pink arrows starkly point to this same pop and the same top affair. To quote Welsh football commentator Toby Charles, "Ohhh 'tis all happening there!"

For the technician, "double tops" as such are bearish. For the common sense fundamentalist as the world races into an interest-free spree, the more free money, the more Gold glee. It ought be that easy and as such we'll see. The initial key is that Gold work its way up through all that overhead congestion which dominates the above chart. Twice in these past two weeks Gold has been up against it and has twice been repelled by it.

Moreover, even as (from our take the overblown) fears of this coronavirus dissipate, the Federal Reserve Bank shan't simply undo its unscheduled 50 basis points rate cut -- certainly not so this being a major election year StateSide. Further, another 25-50 basis points may be subtracted in just over a week's time: the FedFundsFutures are already priced as such in welcoming the Federal Open Market Committee to do just that. And for Gold the challenge is congestion versus ascension.

Continuing in sweeping ascent are Gold's blue dots of parabolic Long trend as we turn to the weekly bars from a year ago-to-date. The "double top" of the two rightmost bars is evident (bearish), however price itself for this past week settled far nearer its high than its low (bullish). It really does set us up for quite the Golden pie fight going into the new week: 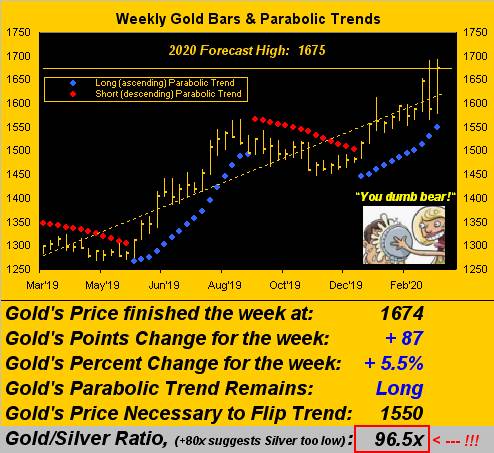 'Tis too early for coronavirus-related economic reporting to hit the Economic Barometer, which itself continues to climb. Our first peek, at least by sentiment, arrives next Friday via the University of Michigan's Survey by the same name, the consensus for which is a drop from 101 to 96. From our tracking of said Survey since 1998, its average reading is 87, to whatever extent that brings some perspective. Indeed, some say the StateSide economy is doing so well that 'tis nicely buffered to weather the pending setback of poor results, only then to get on with its growth. Per the U.S. Department of Labor Statistics as reported on 11 February, the number of job openings as of year-end was 6.4 million: by the United Nations count, there are 122 entire countries with smaller populations than that. Buffer indeed. As well, net job creation in January was revised upward to 273 million, which in turn was just repeated for February. Wanna job? Gotta job! Gotta job? Buy some stock! Whoops...

On one hand, the coronavirus clearly has been the excusive catalyst to drive down the S&P 500, the terrific over-valuation of which we regular state via our "live" price/earnings ratio, still terribly expensive at 35.9x. And that includes the data from just-completed Q4 Earnings season within which of the 470 constituents that reported, 34% did not better their like quarter of a year earlier. But 66% did fare better and in this essentially 0% interest rate environment, nuthin' rocks like stocks such that we shan't be surprised a wit upon their whirlin' right back up again. You know our favourite headline: "World Ends, Dow +2".

Nonetheless, "Corona Emotions" (sounds like a late-70s/early-80s pop band) have set the BEGOS Markets well into their "Expected Directions" (toured with the "Emotions"). This next graphic portrays each component's daily bars for the last 21 trading days (one month) along with the respective grey diagonal trend lines and "Baby Blues", those dots which depict trend consistency. We can view them as four columnar pairs from left-to-right as follows:

¦ The Bond and S&P 500 are in as negative a correlation as we may ever see, the commission to purchase a 30-year Bond perhaps more costly than its present yield-to-maturity of just 1.215%;

¦ The Euro and Swiss Franc are in perfect upside safe-haven harmony, the European Central Bank's RefiRate already at 0.000%, making it rather nonsensical for Lagarde & Co. to cut there come Thursday's meeting;

¦ Gold cannot convince Sister Silver to change from her industrial metal jacket into her precious metal pinstripes, their ratio maintaining modern-day extremes (96.5x at this writing);

¦ Oil and Copper are heading into the dumper, the former posting on Friday an intra-day high-to-loss of -11.5%, its seventh-worst since the turn of the millennium: 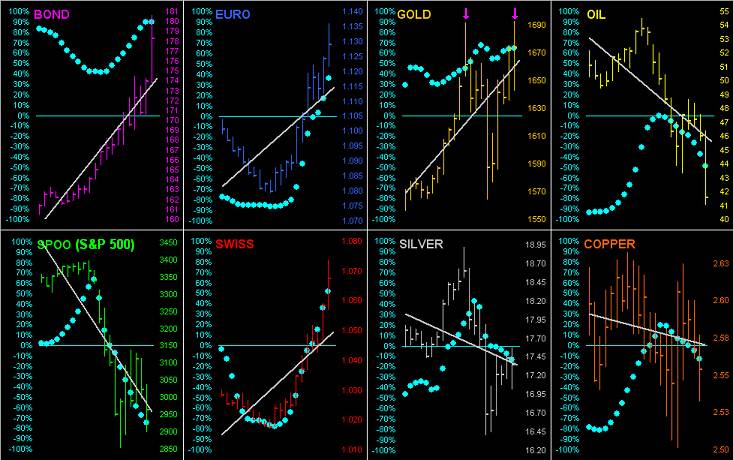 Feel free to frame the above graphic and entitle it "Fear". (Please, no autograph requests).

The fearless component of the two precious metals obviously is Gold, driven this time 'round by fear itself (and should this coronavirus event morph from economic concern into geo-political churn, we've seen in the past how Gold's sizzle can quickly turn to fizzle). And the fearful component of the two obviously is Silver, her sterling reputation of late substituted for that of a wee factory waif. Here are their respective 10-day Market Profiles and denoted support/resistance levels with Gold on the left and Silver on the right: 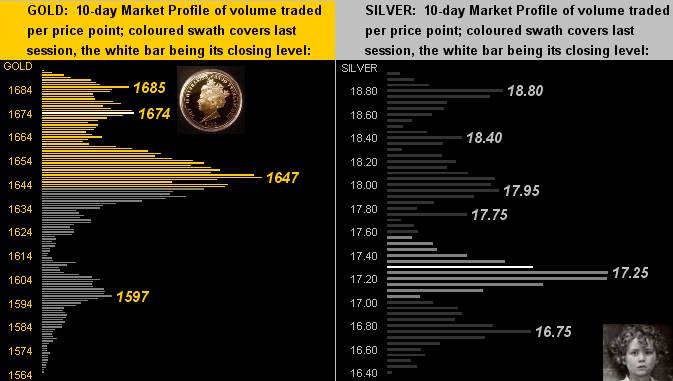 To close, over on the Indian sub-continent they're saying "No" to Yes Bank, its having run afoul of the Reserve Bank of India in failing to cover non-performing assets, (which for you WestPalmBeachers down there are bad loans), the Investment Information and Credit Rating Agency in turn downgrading Yes' bonds to "default". The good news is that India perpetually says "Yes" to Gold, and hardly shall we argue with that. Truly worth trying on! 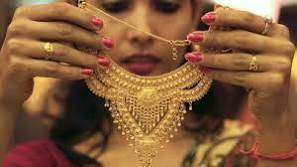