The impact of coronavirus COVID-19 on the diamond industry

In mid-January the diamond industry was first directly impacted by the coronavirus labeled COVID-19 when quarantine measures were taken in China to control the viral outbreak including the temporary closure of shopping centers. An estimated 75% of jewelry stores in Mainland China, and the surrounding regions encompassing Greater China, were shut for an estimated 40-50 days through the first week of March.

With a lack of retail business in China and restricted trading and manufacturing activity in the key region, global diamond demand has notably tapered in recent weeks. On a like-for-like basis, in aggregate, rough prices are down a mid-to-high single digit percentage over the last month and a half, according to the Zimnisky Global Rough Diamond Price Index. A surveyed blend of polished prices is down similarly in the period. 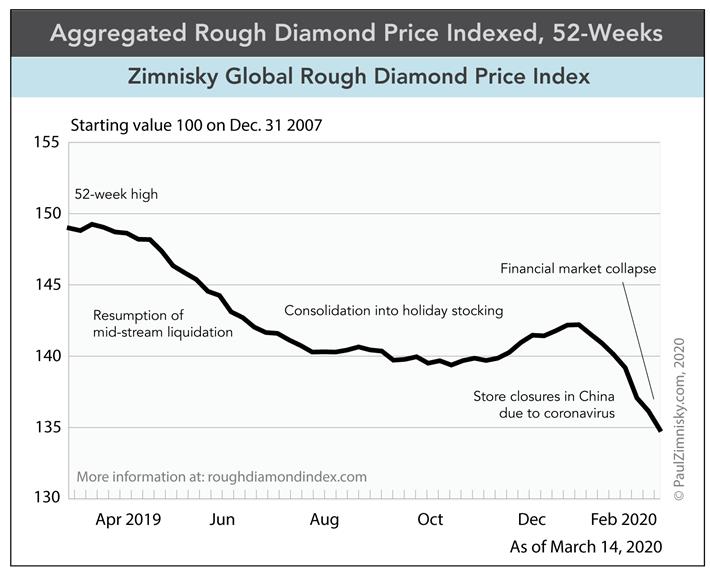 Encouragingly, in mid-to-late February, the number of new occurrences of the virus in China appeared to begin plateauing and on March 4, Chow Tai Fook (HK: 1929), the largest jeweler in the region, said that it had begun to reopen stores as quarantine measures eased, leaving only 30% of stores closed at the time of reporting. However, just as confirmed cases in China began to moderate, occurrences outside of China began to jump, with notable outbreaks in Italy, Iran, Japan and South Korea.

Fear of a pending severe pandemic sent global financial markets into a panic on February 24. The market selloff has continued into the second week of March, marking the worst route for stock markets since the Global Financial Crisis over a decade ago.

On March 9, Italy implemented strict nation-wide quarantine measures, described as a “lock-down,” including a curfew, travel restrictions and forced separation between people in public spaces. The financial markets are beginning to discount the likelihood of similar “lock-downs” in other economically important European nations, as well as Japan, South Korea and even the U.S. Such measures would have a burdensome impact on the global economy.

Sudden stops in economic activity, caused by lock-downs and other quarantine measures, have the potential to create longer-term disruptions to global productivity (supply chains and otherwise) well after the actual viral outbreak is brought under control.

In addition, crashing oil prices, a result of a general slowing of global economic activity due to the virus but also compounded by the recently ineffective attempt led by OPEC and Russia to limit supply, further pressures the unraveling global economic situation.

While lower oil prices will provide somewhat of a stimulus to consumers and also benefit some industries, such as diamond mining, given the size of the global oil & gas industry, a 40% drop in the price of crude oil (in just two weeks) undoubtedly distresses government budgets and global credit markets, sovereign and commercial --most acutely impacting the “petro-nations” including much of the Middle East, Russia, Canada, the Nordic countries and also many of the mid-western U.S. states. 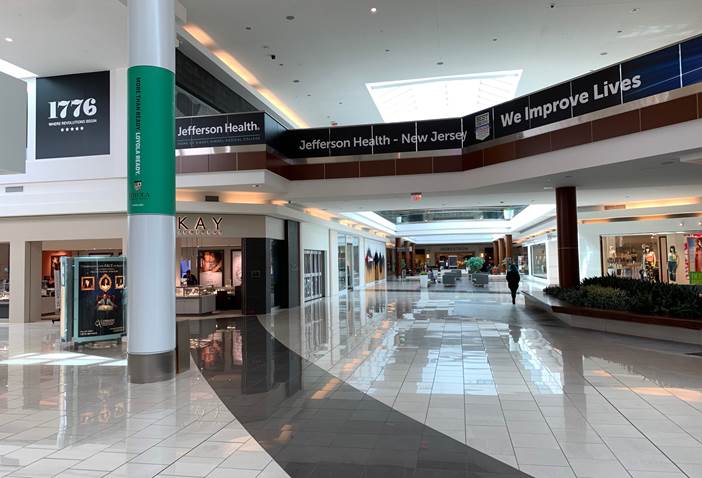 A sparsely populated shopping mall in New Jersey, USA, in the second week of March 2020.

While governments around the world have provided massive liquidity to financial centers in recent days, markets are not responding favorably, which is creating additional fear that central banks do not have the power to rescue financial markets as they have in the past. The S&P 500, a proxy for the U.S. stock market, is down over 15% since the U.S. Federal Reserve Bank provided an emergency 0.5% interest rate cut on March 3.

Of course, all of this is likely to (at least somewhat) proportionately impact global diamond demand and could very well lead the industry into a recession. For context, Chow Tai Fook saw sales fell as much as 60% at its Greater China stores in January and February (even online sales declined a double-digit percentage).

China currently accounts for approximately 15% of global diamond jewelry demand, but as the rest of the world also implements measures to restrict contraction of the virus, consumers in the industry’s other key markets will undoubtedly avoid public spaces, like shopping malls, and diamond jewelry sales will suffer.

Further, a general slowdown of the global economy will likely have a longer-term impact on consumer sentiment and spending, especially on discretionary items like luxury. That said, spending on material luxury, like diamonds, could actually outperform on a relative basis as “experiential” luxury like travel will be limited in the near-term.

The disruption in end-consumer diamond demand will also likely have a knock-on effect on industry supply-chain inventory levels. However, the diamond industry does have a history of being somewhat resilient during times of crisis, in part due to the concentrated nature of the upstream segment of the market.

On March 12, industry-co-leader ALROSA (MICEX: ALRS) announced via a press release that it lowered it contract-client rough diamond purchase mandate for March in an effort to limit unneeded supply to the market. At De Beers' most recently concluded sight, ended the first week of March, the company provided its buyers with “targeted flexibility” to “defer allocations” of goods most greatly impacted by the demand disruption in the Chinese market in January and February.

In addition, the industry is better positioned to handle stocking today than it was in recent years as a painful mid-stream inventory deleveraging cycle already took place through most of 2018 and 2019.

Diamond equities have already discounted much of the above. A basket of diamond miners is down over 40% since mid-January alone and shares of the largest U.S. jeweler, Signet (NYSE: SIG), are down 55%. Even shares of Tiffany & Co. (NYSE: TIF) are down 6% in the period despite the pending $16 billion acquisition by LVMH (Paris: MC), as the current financial conditions increase the risk of deal consummation and as arbitrageurs are forced to liquidate positions, pressuring the spread between the stock price and the cash deal price.

--
Paul Zimnisky, CFA is an independent diamond industry analyst and consultant based in the New York metro area. For regular in-depth analysis of the diamond industry please consider subscribing to his State of the Diamond Market, a leading monthly industry report. Paul is a graduate of the University of Maryland's Robert H. Smith School of Business with a B.S. in finance and he is a CFA charterholder. He can be reached at paul@paulzimnisky.com and followed on Twitter @paulzimnisky.

Paul will be speaking on diamonds at the Antwerp World Diamond Centre’s 2nd African Diamond Conference in Durban, South Africa on May 6 and at the Jewelers of America National Convention in New York on July 27.