Why palladium is getting creamed

The study, which was authored by Matt Watson, weighs the factors pushing palladium prices higher and lower.

The metal was crushed this month dropping 33% from its February highs. Terrible auto sales out of China due to the spread of COVID-19 is the chief cause. 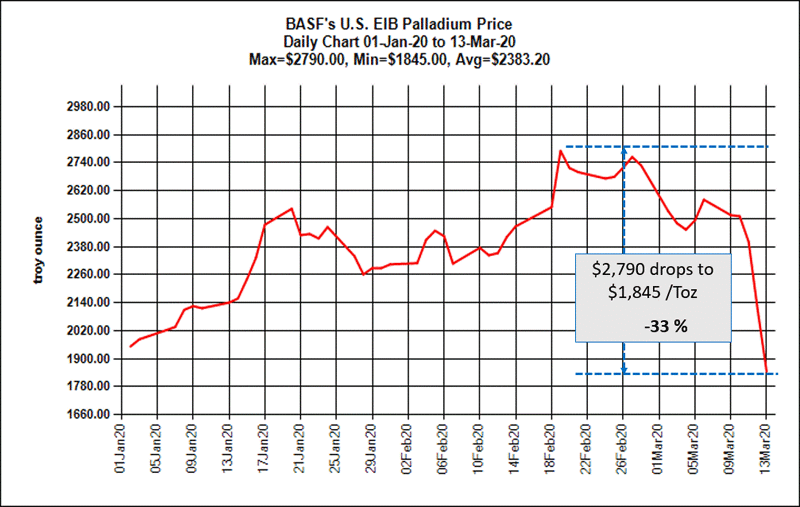 "Clearly the most damage to the 2020 demand forecast is the impact from the global virus pandemic," wrote Watson. "Looking specifically at China, the worlds largest auto market, you can see the bottom fall out of this market in February."

There was also news that researchers are making progress on finding a substitute for costly palladium in catalytic converters. BASF announced a new tri-metal catalyst, developed in collaboration with and sponsored by Sibanye-Stillwater and Impala Platinum. This enables partial substitution of palladium with platinum, enabling a reduction in catalytic converter costs and partially alleviating sustained palladium deficits.

The two factors pushing palladium prices higher are an explosion at Amplats and power disruption at Eskom. Earlier this month, Amplats announced it will drop 1 million ounces of production off its 2020 guidance due to an explosion at its smelter. The second factor is Eskom, South Africa's power utility. Power disruptions are supposed to carry through 2020, which will pinch PGM production in PGM-rich South Africa.

All taken together, Watson sees an imbalance, but not a big one.

"The 2020 projected structural deficit will be slightly lower. Honestly, it doesn’t matter. The price will continue to rise once sanity returns and rollups of market impact are fully modeled. 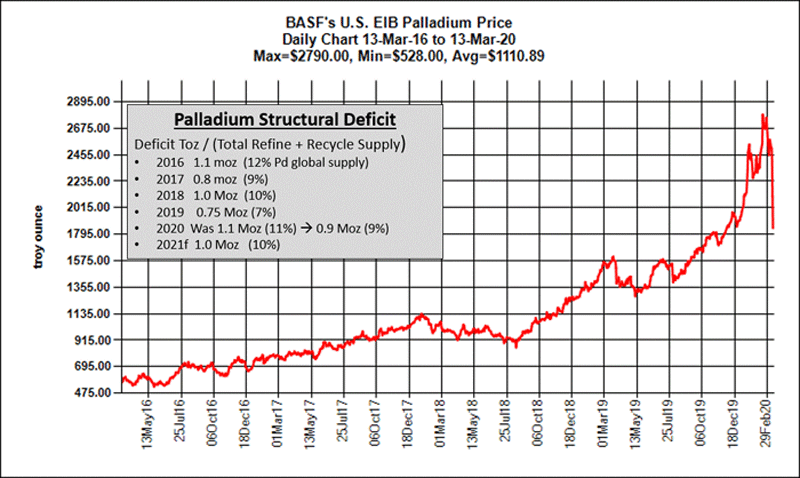 MattWatson@PreciousMetalsCommodityManagement.com
www.preciousmetalscommoditymanagement.com
Disclaimer: The views expressed in this article are those of the author and may not reflect those of Kitco Metals Inc. The author has made every effort to ensure accuracy of information provided; however, neither Kitco Metals Inc. nor the author can guarantee such accuracy. This article is strictly for informational purposes only. It is not a solicitation to make any exchange in commodities, securities or other financial instruments. Kitco Metals Inc. and the author of this article do not accept culpability for losses and/ or damages arising from the use of this publication.