Could gold be at the conclusion of the current correction?

Over the last couple of weeks, the safe haven assets particularly gold have been selling off as part of a mass liquidation of all asset groups following the U.S. equities reaction to the coronavirus pandemic and actions being taken worldwide. Historically speaking when you look at other crisis this one stands alone with some major distinctions. In times such as Black Monday on October 19, 1987, or the 2008 banking financial crisis, initially you had gold trading lower as Mass liquidation began.

Although gold is a good protective vehicle in times of a weak equities market, market participants tend to liquidate across the board to either raise cash for margin calls in equities, or simply move their money into U.S. dollars for safety. However, the distinct difference is that within a short period of time gold’s safe haven allure returned and we saw the precious yellow metal begin to trade higher. 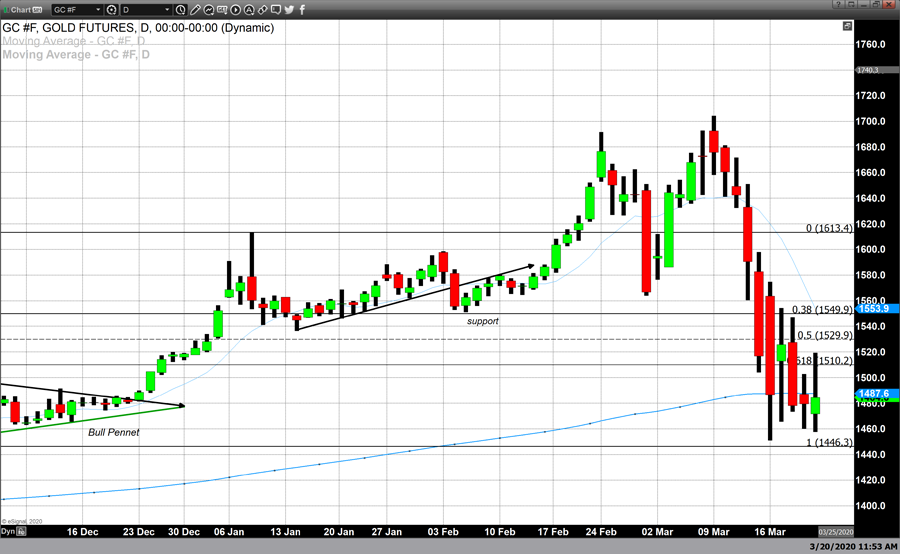 Probably the biggest difference on this particular selloff in U.S. equities is that gold continued to liquidate for an extended period of time with only a few days of gains scattered between lower closes. While gold is closing higher on the day it is still closing lower for the week for its second in a row.

In my opinion it is not if but when, gold’s intrinsic safety and security as a safe haven asset will return as market participants want to park their investment capital that they’ve taken out of their equity accounts which of course would take gold higher pricing.

Speaking with MarketWatch today Jeff Wright, Executive Vice President of Gold Mining Inc. said that, “For now, gold has gotten a boost from Senate Majority Leader Mitch McConnell’s proposal to get needed relief cash in the hands of middle- and low-income households, and other stimulus measures moving forward…has at least temporarily stemmed the tide of liquidation selling of all assets, gold no exception,” he told MarketWatch. “All signs point to gold moving higher in near term, unless panic selling wave returns.”

On a technical basis the weekly chart illustrates that we have seen a decline for the last two consecutive weeks. What is noteworthy about this week’s decline is the low of $1449 that it hit on Monday.

Our studies indicate that $1446 is a former key area of support. From November through December of last year gold prices-maintained lows that did not break that price point up until gold broke above the pennant formation that we identified at the end of last year. The breakout from that formation breakout took prices first to $1613, followed four weeks later by the record high this year which occurred last week, when for the first time in seven years gold breached the key psychological level of $1700 per troy ounce.

Which brings us to the three bullish factors of today’s price move. First a candlestick pattern known as a piecing line was identified over the last two daily candles. Secondly the fact that gold closed right below the 200-day exponential moving average. Last gold closed above the key psychological level of $1500. That indicates if gold opens Monday with a higher open it could signal a return to a long-term bullish demeanor.

I have maintained throughout the last couple of weeks that it is not if but when, demand for gold is a safe haven asset in lieu of the US dollar would occur. Up until today’s date that statement has not had any validity, as market participants used the dollar as a safe place to hold their investment capital. What is different today is that we have multiple technical indicators which are all alluding to the possibility that this correction which began at $1702 has in fact concluded.

In the last 10 trading days gold is dropped $250. That is an unusually steep decline in this short period of time, however considering the current coronavirus pandemic and market participants reaction by mass liquidation of all assets sheds light on why we witness that.

If on Monday gold trades with a higher low, a higher high and close it will confirm that this week’s low was the conclusion of the current retracement.