Gold reversals and the short-term outlook

Traders consult higher timeframes so as to get a big picture view that filters out some short-term noise. So, what story does the monthly gold chart tell? 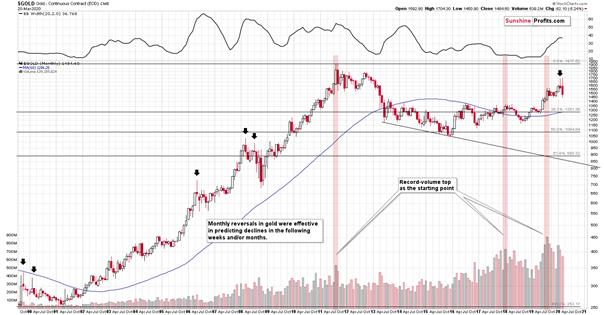 Gold reversed in February, creating a crystal-clear shooting star candlestick. The monthly volume was big, meaning that this candlestick formation is valid. The shooting star is a bearish sign for the following weeks and/or months, especially that in 5 out of 5 previous times that we saw it, such moves lower followed.

The most interesting thing is that two of those five cases formed in 2008, which is yet another link between 2008 and 2020. One of the biggest and sharpest declines in the precious metals sector started with the formation that we just saw. The implications are very bearish - it seems that gold has already formed its final reversal for this medium-term rally.

Please note that March is far from being over, but it seems relatively clear that the top in gold is already in. So far, gold is repeating its February reversal, which has bearish implications for the following weeks and months. 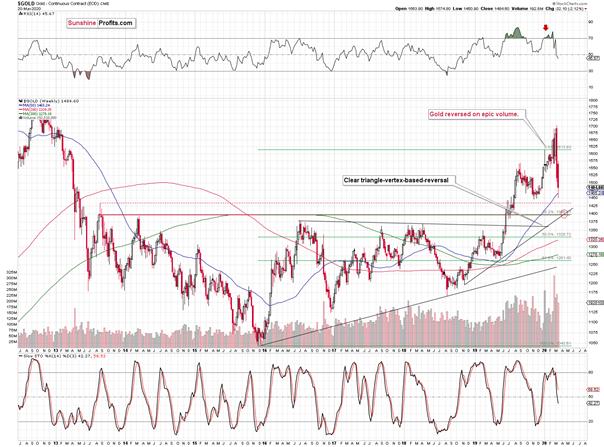 Gold was very likely to reverse, and it did exactly that, just like we had written earlier.
Reversals should be confirmed by big volume, and the volume, on which gold reversed was truly epic, and that's a perfectly bearish confirmation. It was the biggest weekly gold volume EVER.

Well, until two weeks ago, when the record was broken. Gold once again reversed on record-breaking volume. This makes the previous signal even stronger.

We already wrote a lot today about gold and we will write even more, also about silver and miners. We will cover multiple signs that point to lower precious metals prices in the following weeks and months (not days, though). But, the record-breaking-volume reversals are alone enough to make the outlook bearish. That's how significant this reversal-volume combination is.

In addition to the above, the above chart shows the next medium-term target for gold - at about $1,400 level. This target is based on the mid-2013 high in weekly closing prices, the 38.2% Fibonacci retracement based on the 2015 - 2019 upswing, and the rising medium-term support line. Of course, that's just the initial target, gold is likely to decline more after pausing close to $1,400.

The above chart also featured a triangle-vertex-based reversal in early April - about a month from now. It could be the case that gold declines to $1,400 at that time.

Last Monday, we wrote the following:

Still, based on today’s pre-market move to $1,451 along with Fed’s actions, it seems that we might get a local rebound also early this week. The above price level corresponds to the late-2019 lows, which served as support.

Indeed, we got a local rebound early last week and the abovementioned price of $1,451 was the bottom from which this rebound started. Still, it seems that this rebound is not yet over, as the USD Index has not corrected just yet.

Before moving further, we would like to show you how well the triangle-vertex-based reversal gold trading technique worked recently. We’re going to apply it later today 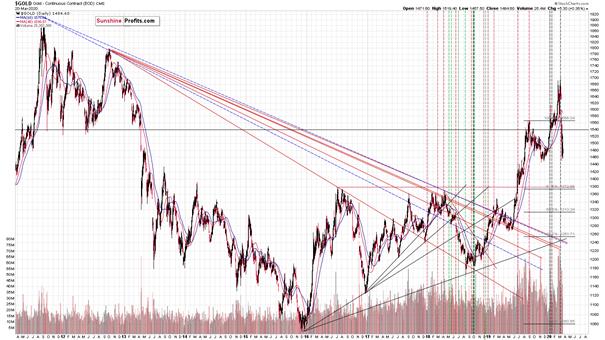 The final top in intraday terms was incredibly precisely indicated by the triangle vertex reversal point.

The recent top just several dollars above the previous 2020 high is quite in tune with the way the previous major tops formed. 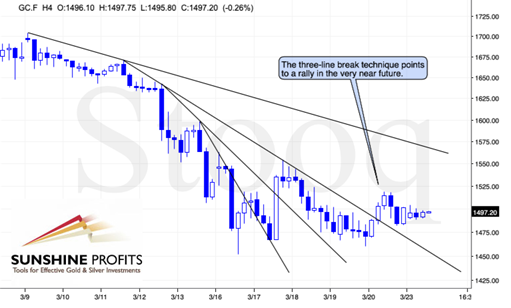 On a short-term basis, we see that gold broke above the third declining resistance line and verified this breakdown by temporarily moving back down and then up again. The “three line break” is one of the technical tools that help to pinpoint the breakouts, and it currently predicts higher gold prices in the near term.