Today the Congress passed a $2 trillion stimulus bill, after the Senate approved the bill yesterday, and was signed today by President Trump. This bill was passed to help support the economy in the United States, as well as American workers by allocating approximately $2 trillion. This bill even set aside $350 billion in forgivable loans to help small businesses that have been hardest hit by the virtual shutdown of the United States. Adults with incomes under $75,000 annually will receive a onetime direct payment of $1,200 and married couples collectively making under $150,000 annually will receive a one-time check for $2,400.

Today’s report indicates that the COVID-19 (coronavirus) has infected over 92,000 people in the United States, and the death toll is currently at 1,380 individuals. This data was collected by Johns Hopkins University’s center for systems science and engineering. Worldwide there were 591,000 confirmed cases with a death toll reported at 26,000. These numbers also indicate that a total of 132,00 infected individuals have completely recovered from the virus. Of the remaining 300,000+ individuals still actively fighting the virus 95% are in experiencing mild effects and 5% are either having major effects or are in critical condition.

The coronavirus had a profound impact on the global economy this week, with solid data supporting that all affected countries have seen a reduction in their GDP (gross domestic product). In response the Federal Reserve along with global central banks have been adding assets to their balance sheets so that there is sufficient liquidity, and when coupled with interest rate cuts enacted by the Federal Reserve as well as other global central banks will certainly slow down the globally contracting economy. 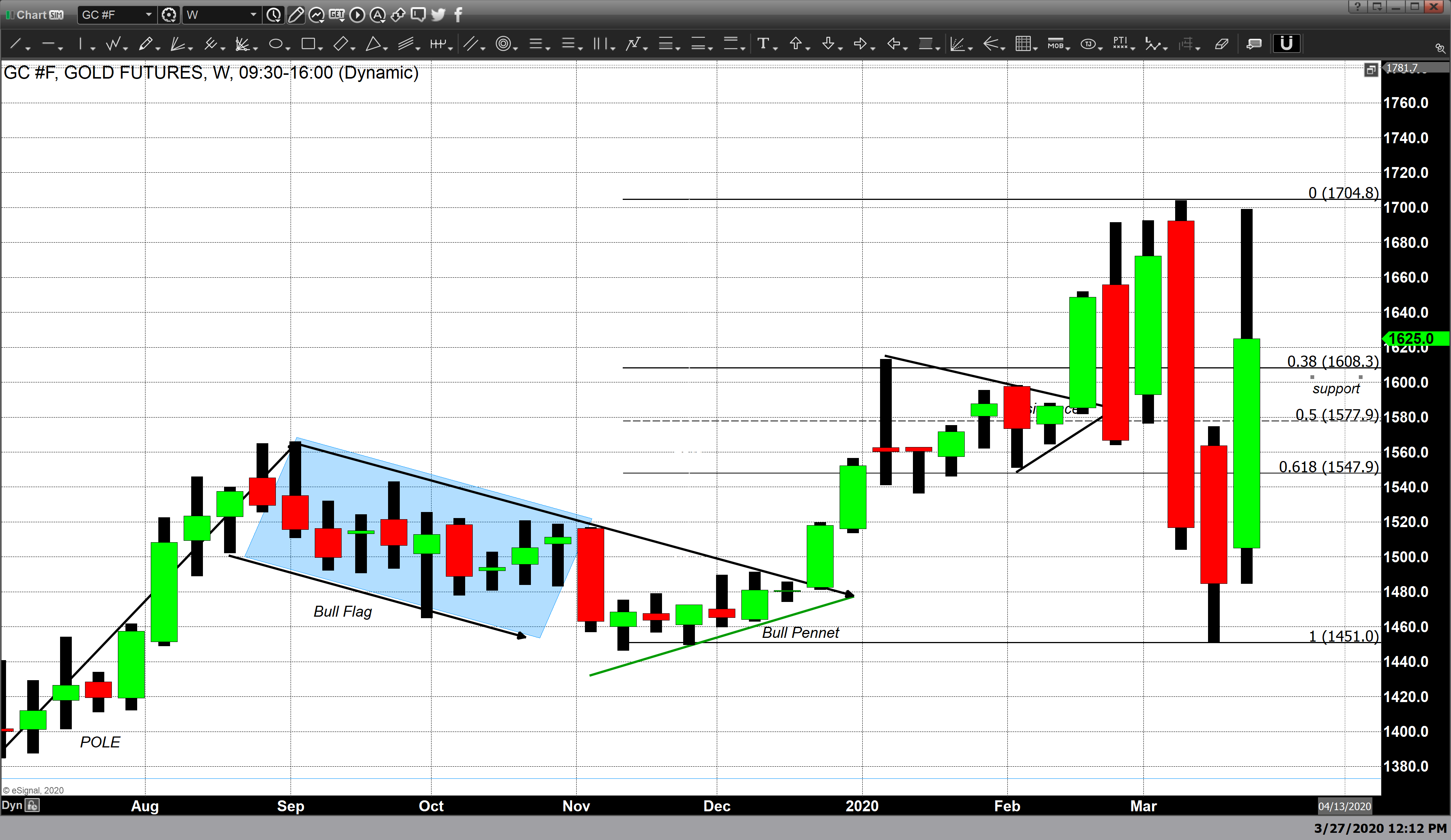 The coronavirus crisis, and the response by central banks worldwide, in addition to the stimulus package signed today and certainly had a dramatic and bullish impact on gold pricing this week. Although gold futures closed down $20.60 in trading today it is fixed at $1630.60, this week gold’s value recorded the largest gain in more than 11 years. Over the last three weeks gold futures hit a new record high for the year. During the week of March 9 gold rose to a intraday high of $1703, and this week gold was able to trade as high as $1698. Considering that gold opened at $1506 on Monday, and closed today at $1630.60, the resulting gain was approximately $125 this week. 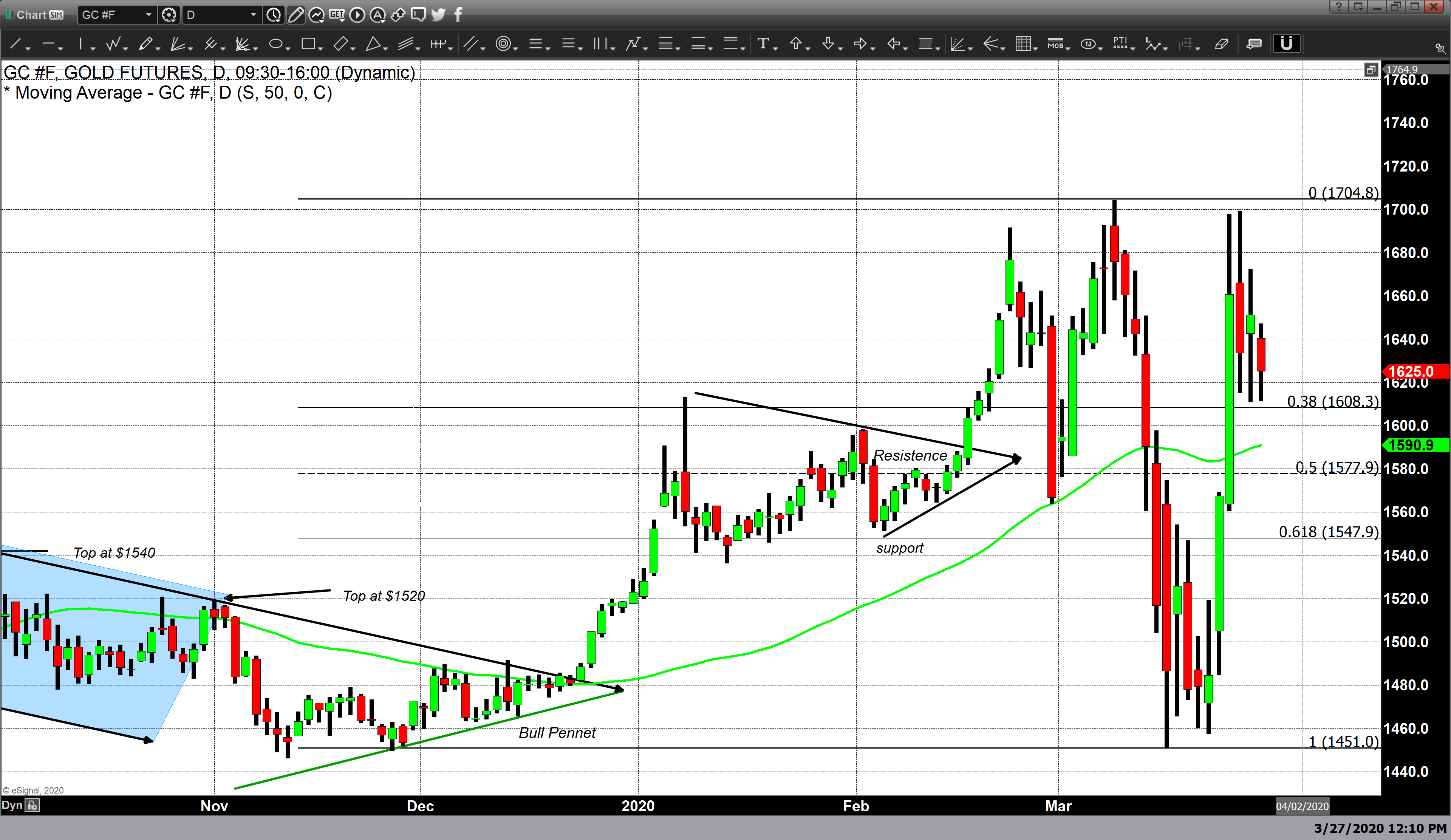 Our technical studies indicate that we have major resistance at approximately $1703 per ounce the highest trading point of the year which was achieved during this month. These studies also indicate support beginning at $1608, which is the 38% Fibonacci retracement to the key psychological level of $1600 per ounce. The retracement we used to calculate are support levels were based upon the last rally which began in November of last year at approximately $1450 to the highs achieved this month just above $1700. Noteworthy was the huge spread that developed earlier this week between spot and futures pricing in gold. The spread became so unreliable that many traders opted to use the futures markets in lieu of the spot market due to their belief that the prices were not a true reflection of real value. However as of today that spread has now narrowed to four dollars which is within the spread’s normal range. 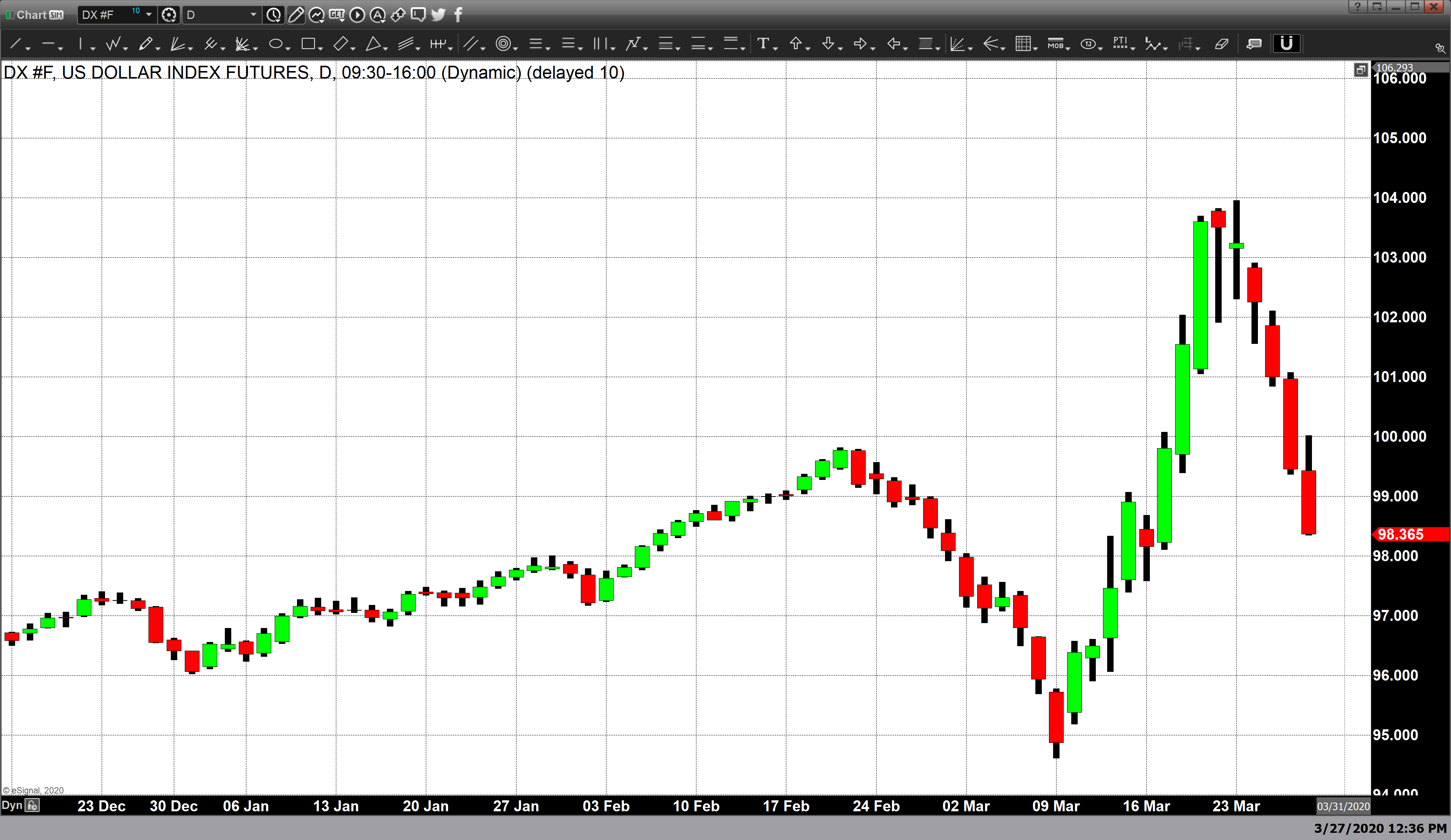 Global central banks continue to actively issue emergency proclamations cutting existing rates as well as increasing their asset balance sheets to provide liquidity, very similar to the financial crisis of 2008. The fact that the Federal Reserve reignited quantitative easing could very easily have the same type of impact it had during the financial crisis which would be highly supportive of gold. In fact, we could see gold over this next year take out the former all-time record high of $1900 per ounce.