Recent action in gold indicates that there is solid price support at the recent low of $1576. On a technical basis, there are two major studies identified that confirm this assumption and market model. The combination of these studies together indicates a high probability that gold prices will move higher over the next few weeks.

The first criteria for this pattern that has to be met is that it needs to be found after a defined downtrend. This downtrend will be capped by a final extended price decline, creating a large red candlestick which is the first candle of this pattern. The candle created on Tuesday; March 31st fits this profile.

The third and final candle of this pattern is a large green candle, which is created from a strong upside move. This candle opens above the star formed by the second candle. This final candle occurred today and completed the pattern. 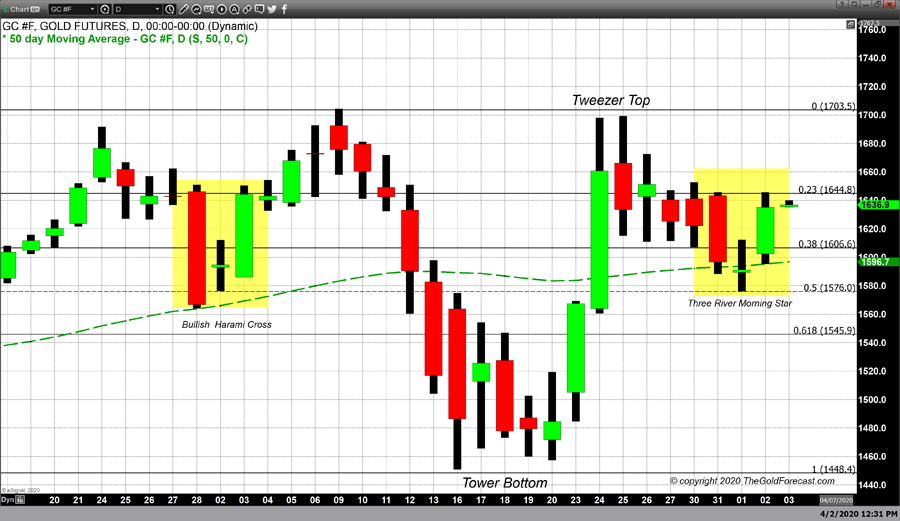 A three river morning star signals a change or pivot in the current trend from bearish to bullish. Traders use it as an early indication that the downtrend is about to reverse. A morning star pattern can be useful in determining changes in trends, especially when used alongside other technical indicators.

However, at the same time caution must be used when acting upon this pattern type. This can be alleviated by using other technical indicators to filter out the more valid occurrences of the three river morning star. In the case of today’s pattern, the low of yesterday occurred at the 50% retracement. Secondly the body of the star which occurred as a second candle traded under the 50-day moving average. And the low of today’s large green candle also occurred at the 50-day moving average.

Our technical studies indicate that there is minor resistance at today’s high which occurred at $1645. This price point represents the 23% Fibonacci retracement level. If gold is able to push above the current minor resistance at $1645 than it should have no real major resistance until it hits the recent highs which range from $1698 to $1703.