Many uranium stocks have rallied since the March meltdown in global markets. I’d argue that they aren’t just rebounding with the markets, but because uranium itself is up sharply. This has important investment implications. 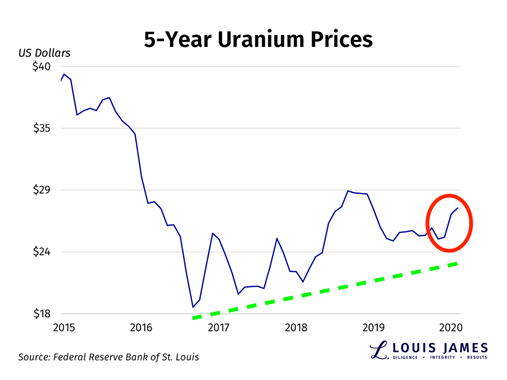 If uranium stocks were simply “enjoying” a dead-cat bounce alongside mainstream equities, I’d say that was a clear warning to stay away.

It’s specifically because they’re responding to increased value in the underlying commodity that makes them different from most other stocks, and therefore of interest today.

Before I go on to make that fundamental case, there are some other things to note in the chart above.

Clearly, the glass-half-full view is that the metal is on a clear upward price trend that started in 2016.

The glass-half-empty view is that the current rally in uranium prices is smaller than every other rally we’ve seen since the bottom in 2016.

That’s true, but who’s to say the rally is over? I think it’s just getting started.


Now, I have to say that much of the latest supply reduction is due to COVID-19. In theory, that supply might be restored once the worst of the epidemic passes.

In practice, nobody is making money at current prices—perhaps only Kazatomprom. When Cameco announced that it was shutting down Cigar Lake, they did not say they would start up again after the epidemic passes. They said they’d consider it at that time.

Okay, fine, but does it make sense to buy uranium stocks when the whole business is so unprofitable that major players are cutting back and shutting down?

Well, I’m not urging anyone to buy today. But I do think we could see some truly spectacular buying opportunities in the immediate future.

Because uranium stocks have shown a strong pattern of falling sharply on days when the broader markets step off a cliff—and I do expect Wall Street to fall off another big cliff before the Crash of 2020 is done. No one can ever know the future, of course, but this is my expectation.

If I’m right, even the best uranium stocks could fall through the floor even as uranium prices reach new multi-year highs.

But would it be a good idea to buy, even then? What if the global recession now getting under way turns into a depression and energy prices remain subdued for years to come?

Fair questions. In fact, I do think this outcome is likely.

There’s a difference, however, between nuclear power and oil, which is highly sensitive to reduced demand from things like people traveling less during hard times.

Energy prices in general will suffer from less consumption. Markets that include high-usage customers, like aluminum smelters, could face serious oversupply. But nuclear power is especially good at, and largely used for base-load power. It’s what keeps the lights on in many people’s homes at night—and in essential services like hospitals day and night.

Whether we face a recession or a depression, people are still going to want the lights to turn on.

And you can’t just throw some other element in a nuclear power plant and expect it to work.

For years to come, there is simply no alternative to uranium.

But the average cost of producing the stuff is around $40 per pound. The “incentive” cost that makes it worth building new mines is north of $60 per pound.

Perhaps most critical of all is the fact that the cost of uranium fuel is such a small part of the cost of operating a nuclear power plant, power companies can pay much higher prices without blinking an eye.

In short, we’re seeing supply destruction in a market where demand will hold up better than most, even in a severe economic downturn—and in which prices are already below the average cost pf production.

At some point, power companies will draw down their inventories to the point at which it becomes urgent for them to secure new, long-term supply contracts with miners.

At that point, uranium prices could easily double—or more.

If this happens after uranium stocks go on the deep-discount rack courtesy of another major market meltdown, the gains for contrarian investors should be spectacular.

What could go wrong?


So no, I don’t see any great threats to higher uranium prices. The worst likely scenario I see would be more fluctuation at prices below the average cost of production for some months—maybe a year—before they really take off. I can live with that risk. The bigger risk, in my view, is missing the rally I do think is coming.

The key takeaway is that I see a “perfect storm” brewing of lower stock prices in the immediate future, even as the upward trend remains intact and the fundamentals call for much higher prices ahead.

I have my own list of uranium stocks I like best, and one in particular that I’m keen to buy if I do get a chance to do so on the cheap in the days ahead. If you’d like to join me in that speculation, please subscribe to The Independent Speculator.

But the idea—the heads up regarding the opportunity shaping up—that’s yours free of charge.

P.S. To be kept abreast of more dangers, opportunities, and issues affecting us all, please sign up for our free, no-spam, weekly Speculator’s Digest.