Gold closes below $1700, despite dollar weakness

It may have been gone as soon as it appeared gold above $1700 per ounce was short-lived as market forces and a changing market sentiment took the precious yellow metal $37 lower today, with gold futures currently fixed at $1694.50. The first indication that gold futures might correct occurred on Tuesday, April 14. This was also the same day that gold futures traded to the highest level of 2020, when it traded to an intraday high of $1788.80. The indication which we spoke about on Tuesday, Wednesday as well as Thursday was the development of a three-day candlestick pattern called a “Three River Morning Star”.

On Monday gold futures had closed at $1760 the former highest price this year. This was until Tuesday when pricing opened above the close of Monday’s candle, and closed at approximately the same price point which formed a “Doji” star in the evening position. On Wednesday gold opened below Tuesday’s opening price creating a gap above the star above the highs of Monday and Tuesday. 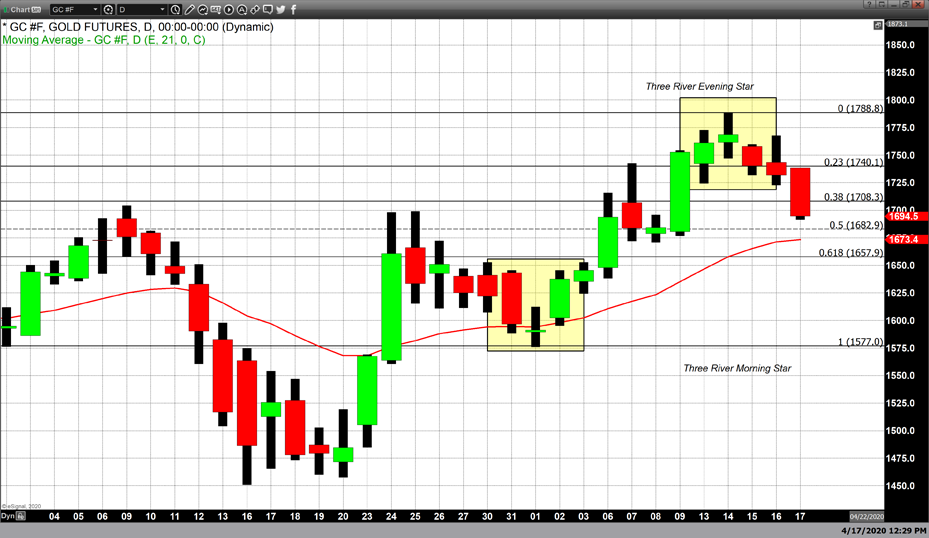 These three candles collectively completed the pattern. The following day, on Thursday gold pricing resulted in a red candle that contained a lower low, and a lower high than the previous candle (star). Most candlestick technicians believe that on any short-term pattern one should wait for a confirming candle which gives the prior signal much greater weight, Thursday’s candle confirmed the pattern which began on Monday.

In a report from MarketWatch, Lukeman Otunuga, Senior research analyst at FXTM said: “Risk sentiment has been bolstered by U.S. President Donald Trump and reports suggesting a potential coronavirus treatment” from U.S. drug company Gilead Sciences Inc. “Market hopes around plans to ease lockdown measures are set to rise, especially after Trump set guidelines that allow social distancing rules to be lifted as soon as four weeks. While gold may sink lower on the good news, the downside will most likely be limited as disappointing economic data across the world drags investors back to reality.”

Today gold had the largest single day decline this week, which resulted in a lower weekly close. Many analysts including myself believe that this current price weakening will be short-lived at best, so the question becomes at what price point will gold find support.